Billionaires vs. America: The real story of the 2020 election 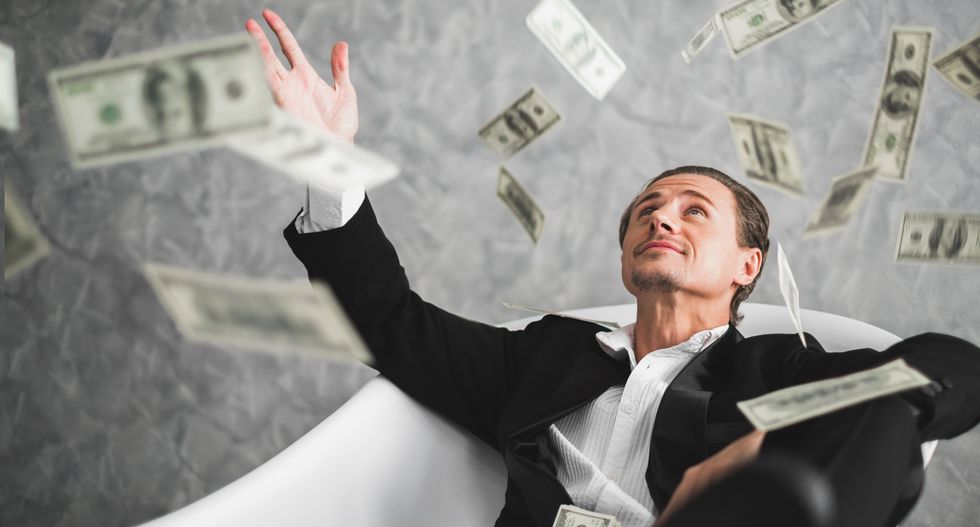 Will 2020 be defined as the election that pitted the super-wealthy against everyone else? Early indicators, as candidates start to enter the race, suggest that may well may be the case. Increasing rhetoric on the Democratic side is highlighting the already popular idea of soaking the rich as a way to address the myriad of social problems caused by economic inequality.  Meanwhile, billionaires are panicking and the right-wing propaganda  machine is snapping into action, trying to portray mild economic reforms as the moral equivalent of the Holocaust.

There's a real chance, then, that 2020 will become a showdown between American democracy and American capitalism. The question of whether money can trump the will of the people may be put to the test in a way it hasn't before.

Sen. Elizabeth Warren was the first serious Democratic contender to make it official that she's running for president. It's clear that Warren's campaign, like her political career so far, will be focused on these issues of economic fairness. Last week, the Washington Post reported that Warren is proposing a "wealth tax" that would be applied to assets of the fantastically wealthy, with a focus on ameliorating massive inequality over time.

"Middle-class America has been paying a wealth tax forever," Warren explained on MSNBC Monday night. "It's called a property tax, on their principal accumulation of wealth, which is their home."

"How 'bout we'll also tax your diamonds and your yachts and your art collection and all those other ways that people accumulate wealth?" she added.

This follows a round of heavy coverage for Rep. Alexandria Ocasio-Cortez, D-N.Y., who has proposed raising the marginal income tax rate to 70 percent for anything made above $10 million in a year. While there's considerable commentary pitting the two proposals against each other, they are best understood as complementary signs part of a rising tide of interest in using our tax structures to combat the a central problem of our society: A tiny handful of people hoard a disproportionate share of American wealth, while millions of Americans are poor, or live paycheck to paycheck.

The extremely wealthy, it's fair to say, have noticed this rising tide and are ready to start marshaling their immense resources to fight it. On Monday, Politico reported that a bunch of anonymous Wall Street executives are eager to spend heavily to make sure the Democratic nominee appeals to the "socially liberal, fiscally conservative centrist" types, as one CEO put it.

“It can’t be Warren and it can’t be [Bernie] Sanders,” another banking CEO told Politico. “It has to be someone centrist and someone who can win.”

The idea that the winning strategy is to be "fiscally conservative," which is code for support of economic policies that exacerbate economic inequality, is being heavily pushed by the billionaire class right now. In particular, billionaire former Starbucks CEO Howard Schultz has leveraged his flirtation with an independent presidential run into a megaton of media coverage — which he has used, none too subtly, to try to intimidate Democrats out of embracing progressive tax policies.

On NPR Tuesday morning, Schultz called Warren's tax plan "ridiculous" and complained that it was "punitive." Warren shot back on Twitter:

What's “ridiculous” is billionaires who think they can buy the presidency to keep the system rigged for themselves… https://t.co/KubgrI7wUX
— Elizabeth Warren (@Elizabeth Warren) 1548771477.0

I don't think Schultz is seriously considering a run for president. Instead, he and the banking CEOs who spoke to Politico are just trying to scare Democrats into backing away from progressive economic platforms, both by pushing the idea that "centrist" views are widely popular and by threatening Democrats with the withdrawal of campaign donations — and even the support of third-party spoiler candidates — if they keep talking about raising taxes.

In the past, a lot of these outraged arguments conflating progressive taxation with "punitive" taxation had, I suspect, more traction with the public because the myth of the meritocracy still had so much sway. The idea that people are rich because they earned it had real pull over the public when the face of wealth was Bill Gates and Steve Jobs, genuinely intelligent men who have created products people actually use, and feel genuine affection for.

The past couple of years have seen the great unmasking of the billionaires, starting with the daily reminder that Donald Trump — a self-proclaimed billionaire, whether or not he really is one — sounds like a raving troll on Twitter and, in person, is frequently incapable of speaking in full sentences or expressing himself with coherence.

But it's not just Trump. The entire class of young internet billionaires who spent the past decade being toasted as geniuses is now experiencing a  major backlash and plenty of exposure for some of their intellectual and business flaws. Mark Zuckerberg and Sheryl Sandberg's failure to deal with the way Facebook was being used for fake news, Jack Dorsey of Twitter's propensity to sound like a stoned freshman talking about Ayn Rand, Elon Musk accusing the man who saved the Thai boys from drowning of pedophilia -- all these stories have laid waste to the idea that the rich are simply smarter people than the rest of us.

There's no real constituency for a "socially liberal, fiscally conservative centrist" candidate, as Michelle Goldberg at the New York Times pointed out. As she notes, only 3.8 percent of voters fit that profile. In contrast, socially conservative but economically progressive voters — who don't have a party representing their views in the United States — are nearly 29 percent of voters.

What's the largest single group of voters? That would be people who are progressive both socially and economically, who make up 45 percent of the electorate.

Right wing media is taking a different approach towards discrediting Warren, Ocasio-Cortez and other progressive politicians. Since it's hard to get people to agree that it's a terrible crime to tax rich people the same way we tax middle class people, the favored propaganda technique is to channel the audience's racism and sexism against progressive ideas instead.

Rush Limbaugh, for instance, argued on his show that returning our marginal tax rates to the levels of the 1960s — which is what Ocasio-Cortez's plan would do — would literally lead to genocide. Ed Henry of Fox News linked Warren's tax plan to the human rights abuses in Venezuela.

This kind of rhetoric is about taking the white, male grievance that is the bread and butter of right-wing propaganda, and trying to turn it to the defense of the super-rich. The implication is that women and people of color are out of control and are out to oppress white men — like genocidal dictators, no less! — and that opposing their tax plans, no matter how appealing they may appear on the surface, is the only way to save white male privilege.

Fox News and other right-wing propagandists are being canny, if evil, in going this route. The research Goldberg draws on, conducted by political scientist Lee Drutman, shows that fewer than 23 percent of voters support the Republican platform of economic and social conservatism. So in reality, the only way to hold the conservative coalition together is to focus on its shared commitment to white male supremacy, since defending rich people's right to own everything while the rest of the country struggles is not an easy sell.

Economic progressivism is popular. But rich people, by definition, have lots of money to spend on trying to harness and control the news cycle. Well-financed propaganda can thwart people's voting decisions by distracting them with circus sideshows, like Warren's DNA test or Ocasio-Cortez's skin care regimen, or distort perceptions about what is normal, as Schultz is doing with his possibly phony presidential aspirations.

This upcoming presidential election could be a historic touchstone, a real measure of whether our democracy is morphing into a plutocracy, where the true desires of the people are overwhelmed by the sheer force of money in politics. The good news is that figures like Warren and Bernie Sanders — as well as the widespread embrace of policies like Medicare for All and a Green New Deal by most of the aspiring presidential candidates — suggest that the American people may still overcome big money at the polls.