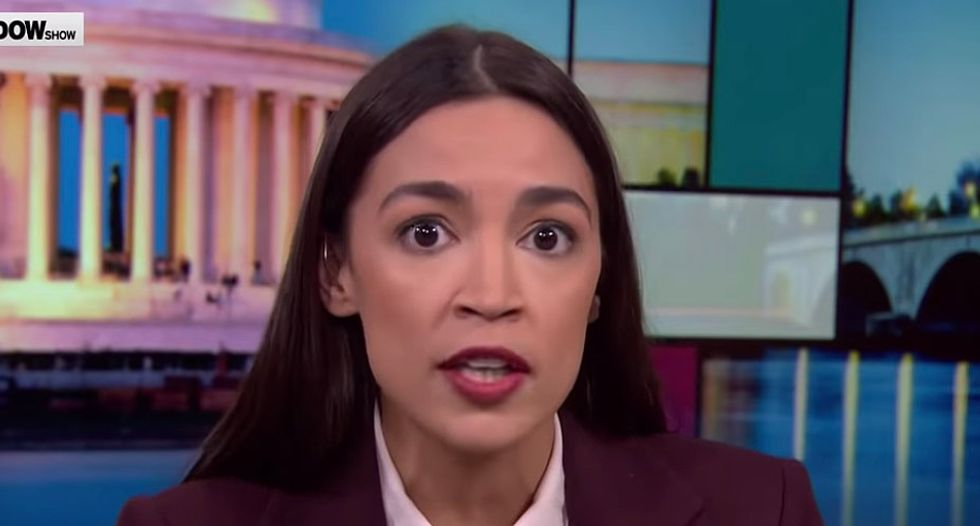 “The one thing Trump has not talked about is that he has systematically engaged in the violation of international human rights on our border,” Ocasio-Cortez said. She went on to talk about the child who died in ICE custody on Christmas and the freezing holding cells—known as hieleras—where many detained immigrants are kept.

“The president shouldn’t be asking for more money for an agency that has systematically violated human rights,” she continued. “He should really be defending why we are funding such an agency at all.”

Ocasio-Cortez also disputed the notion that most undocumented people in the U.S. cross the border illegally. Instead, she said, visa overstays are the biggest source of undocumented immigrants. And, she added, the more Trump restricts legal immigration, the bigger this problem will get.

“He’s fighting against almost every legal way people can enter this country, forcing them to become undocumented,” she told Maddow. “And then he’s trying to attack their undocumented status. It is systematic, it is wrong, and it is anti-American.”

“These women and children who are coming here with nothing but the shirts on their backs... are acting more in the American tradition than this president right now,” she added.

Rep. Alexandria Ocasio-Cortez of New York — who just became the youngest woman elected to Congress — gave a powerful interview that was the perfect antidote to Trump’s stale racism.

It was authentic, personal, and passionate, and reminded Americans of the human stakes of Trump’s racist grandstanding on immigration.

Ocasio-Cortez talked about her fellow restaurant workers who have fled the country in fear of Trump’s hatred, and the damage that this does to communities.

Ocasio-Cortez went on to say that even if people are "anti-immigrant" in the United States, that was no reason to build a border wall, because "the majority of people [in America] who are documented is because of visa overstay, not because people are crossing a border illegally."

Ocasio-Cortez laid the smackdown on Trump’s racist attacks on immigrants with the facts, and that makes America truly great.