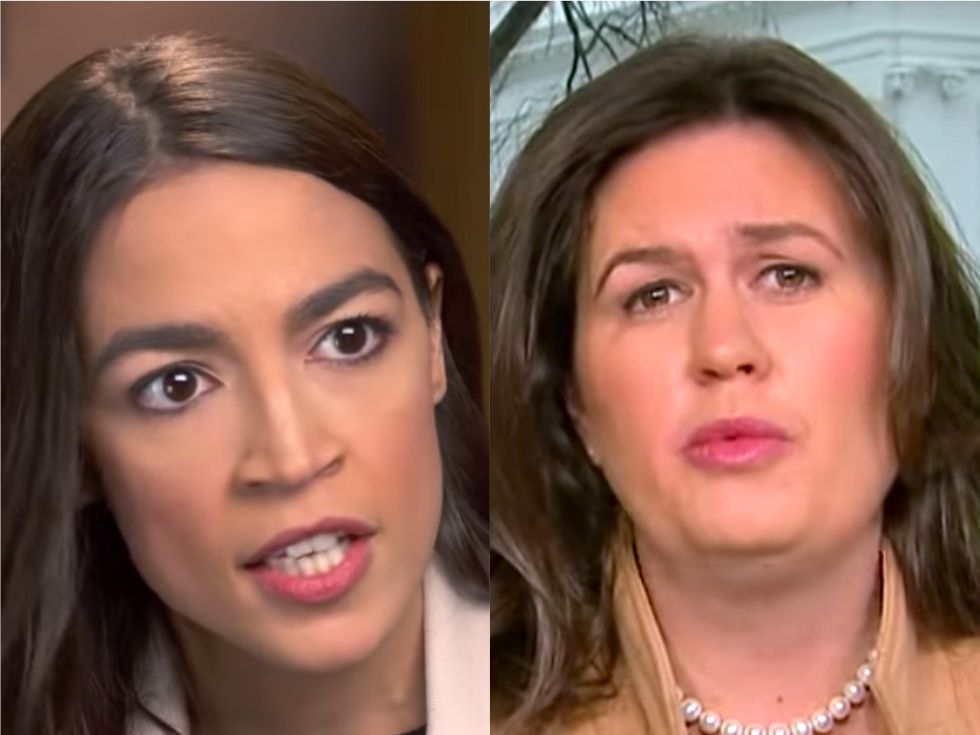 For a newly elected congresswoman, Rep. Alexandria Ocasio-Cortez (D-NY) is receiving outsized attention for nearly everything she does. Much of the attention is positive — she's earned a nationwide fanbase — but she has also earned a ludicrous level of criticism from the right wing over topics as trivial as her high school nickname.

And she has drawn some fire from the mainstream press when it's revealed that, as is true for many of her colleagues, she doesn't have perfect knowledge of world affairs and sometimes makes factual errors.

It's fair for her to get fact-checked, of course. But as others have pointed out, her mistakes are sometimes put on a par with Trump's most egregious and vicious lies, even when she corrects them or clarifies misunderstandings.

"Facts are facts, America," she said on Twitter Monday. "We should care about getting things right. Yet standards of who gets fact-checked, how often + why are unclear. This is where false equivalency+bias creeps in, allowing climate deniers to be put on par w/scientists, for example."

"She’s been serving for almost 2 years. I’ve served 4 days," the New York representative said. "Why is she fact-checked so little? Is she adhering to some standard we don’t know about?"

Politifact responded to her inquiries.

"We do spell out our process for selecting what facts we check," PolitiFact said. "We focus on significant statements likely to be repeated by others that we think people will question whether or not the information is true."

It continued: "One of the biggest challenges for us is that for all the work we do (1,500 fact-checks published last year) there are only about 12 of us. It's probably accurate to say we wish we could fact-check every politician more. Here's to hoping to cover more ground in 2019."

Ocasio-Cortez noted that fact-checkers' methods invariably require that they used their discretion, adding: "So it’s still fair to ask why a controversial WH Press Sec is getting let off so easy."

Sal Rizzo, a fact-checker at the Washington Post, noted: "No one likes to be fact-checked. There's a simple way to avoid it. And there's a big difference between the colossal amount of time we spend fact-checking Trump (7,645 false/misleading claims and counting) and TWO fact-checks of [Ocasio-Cortez]."

PolitiFact and the Washington Post generally do excellent work holding politicians and public figures accountable, though they are not above reproach. And PolitiFact also made the additional point that, by checking other administration figures like President Donald Trump and Vice President Mike Pence, they're often correcting the same claims that Sanders will go on to repeat. And the reason Ocasio-Cortez's claims are attracting so much attention is that she has become incredibly influential at a stupefying pace, and people are interested in understanding her views. Her disproportionate popularity is bound to lead to increased criticism.

But be that as it may, its incumbent upon the media not to create a false impression of equivalency. The Republican Party and the Trump administration, in particular, are involved in a massive campaign of disinformation and political deception aimed at stirring up bigotry and hatred against vulnerable peoples. Democrats and their allies sometimes make mistakes or stretch the truth in the pursuit of their goals, but they display nothing comparable to the historical level of manipulation and mendacity that sustains the right wing as it is presently configured. The media is still learning how to make that clear to its audience.