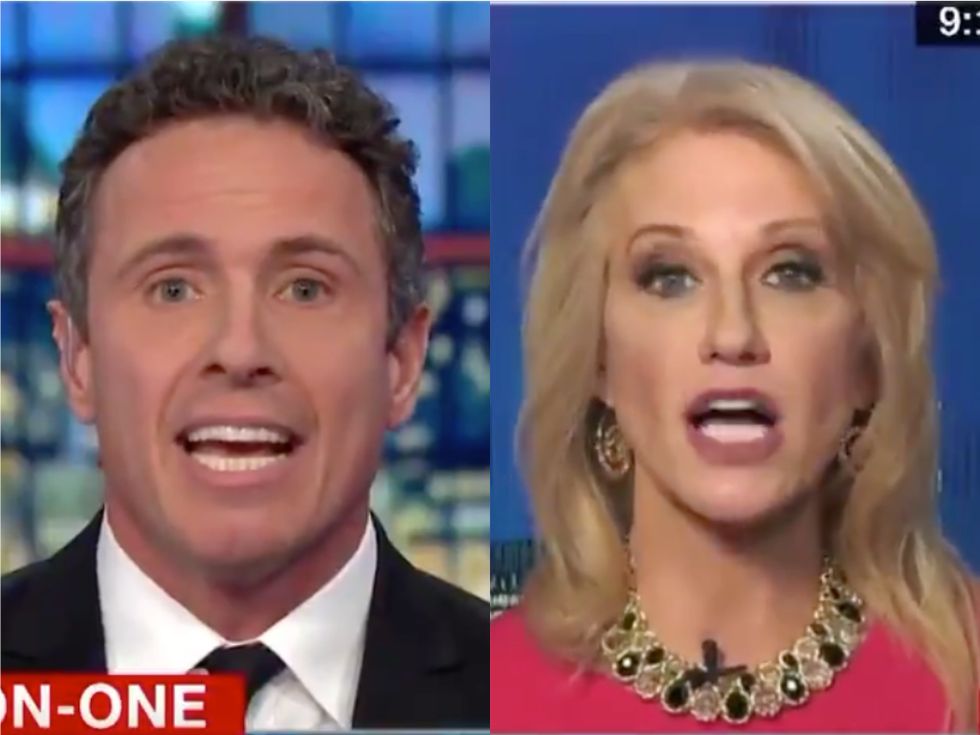 Proving once again that putting her on TV provides no informational value to the viewers, Kellyanne Conway appeared with CNN's Chris Cuomo Thursday night and spent the entire time spinning nonsensical defenses for President Donald Trump's onslaught of lies.

Right out of the gate, Conway began attacking Cuomo's account of Trump's history of lying about the hush money payments during the 2016 campaign to women who say they had affairs with the president. But when pressed about the Trump's obvious lies — like the fact that he told reporters in April 2018 that he had didn't know about the $130,000 payment to Stormy Daniels — she offered ridiculous excuses.

"That was April!" she said. "The president said in April on Air Force One... they said, 'Did you know about the payments?' He said 'no.' I asked the president, 'What did you mean by that?' Because by April of 2018, the whole world knew, based on the Stormy Daniels revelation, so the whole world knew. ... So he wasn't talking about what he knew in April."

"He did not lie! He's talking about when the payment was made," she said.

However, as Cuomo would go on to point out, a tape of a conversation between Cohen and Trump recorded during the campaign clearly show Trump talking about another hush money payment to Karen McDougal. It's not credible for Trump to pretend he didn't know about one and not the other. Conway also left out the fact that the White House and the Trump campaign had completely denied the story many times previously after the campaign — only for those categorical denials to be completely refuted.

Cuomo even noted that, because of Conway's behavior, his audience often objects to her appearances on the show.

"The reason they get frustrated is they believe that you guys don't answer questions, and that you spin a lot, and that you ignore what's fact," he said.

"Really, Christopher?" she said. "You're gonna call me a liar!?"

Throughout the whole interview, she constantly interrupted Cuomo while playing the victim and accusing him of interrupting her. When she would begin to answer questions, she'd pepper in pointless tangents and asides to denigrate the host and avoid saying anything of substance.