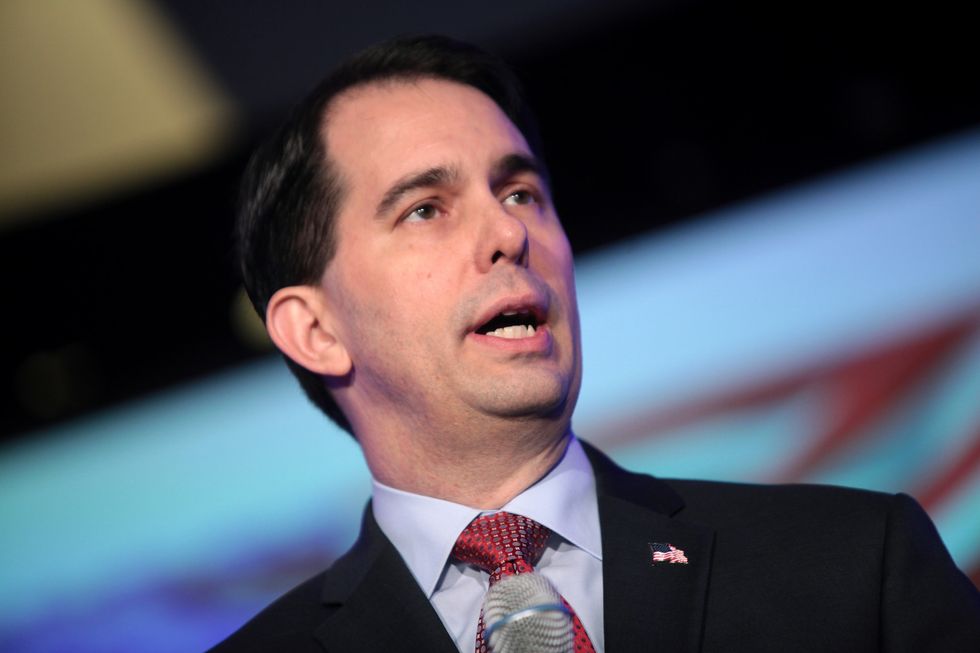 Stinging from their defeat at the polls in November, Republicans are now rushing a set of bills through a special session of the Wisconsin State Assembly nakedly designed to curb the power of Democratic Governor-elect Tony Evers and Attorney General-elect Josh Kaul, and handicap Democrats' competitiveness in upcoming elections. The bills are scheduled for a vote on Tuesday, with the plan of getting them on outgoing GOP Gov. Scott Walker's desk so he can sign them before losing his job in a few weeks.

But Republicans didn't plan on the furious wave of protests that would descend on the state capitol in Madison on Monday afternoon.

Demonstrators crowded outside as the bills were debated, trying to shout down Republicans' power grab:

The protests were spurred along by MoveOn political director Ben Wikler, who has been covering the GOP's power play closely since last Friday when the bills were first introduced, and who urged his followers in other states to call senators in key districts:

Wisconsin's GOP Senate Majority Leader, Scott Fitzgerald, seemed ill-prepared for the wave of condemnation directed at his caucus, saying that he was "a little surprised" by the reaction and calling the demonstrations "over the top." But he didn't even try to hide the motivation behind the bills, saying that the bills were necessary because "we don't trust Tony Evers right now."

At the same time, in a seeming acknowledgement that the protests are working, Fitzgerald said that he doesn't yet have the votes for all of the legislation.

Among the things the bills would do are restrict Evers' power to allocate public funds, shift the authority to let Kaul terminate a state lawsuit from Evers to the legislature (thus vetoing his campaign promise to end Wisconsin's involvement in the Affordable Care Act lawsuit), give the legislature authority to defend cases challenging the constitutionality of their own bills (so they can fight to preserve their own gerrymandering scheme), cut back early voting, and move the date of the Democratic presidential primary so that it is held on a different day from the state Supreme Court election (which the GOP hopes will depress turnout and let them keep their judicial majority).