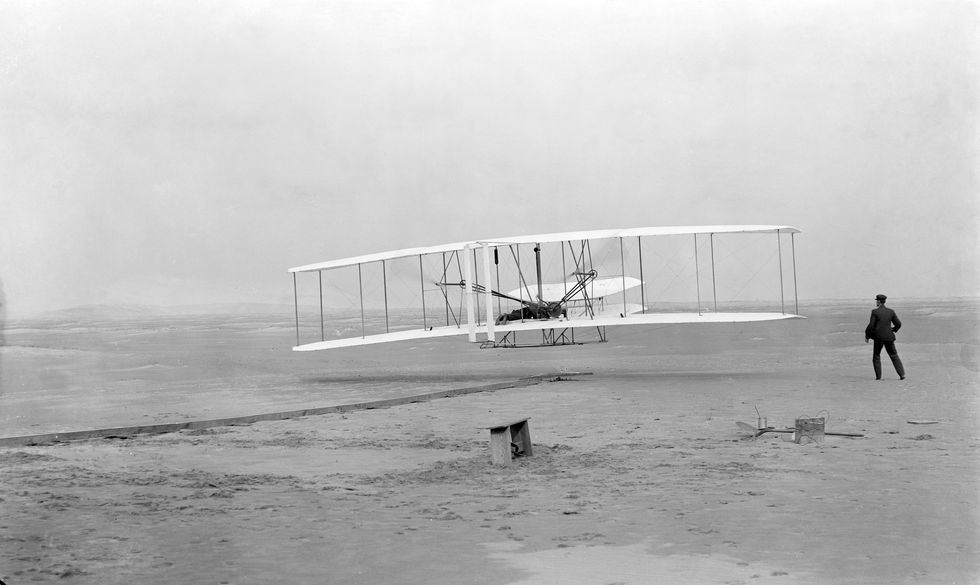 It is hard to fly in the face of history. Even harder when you are dealing with historical icons. We like to believe in our historical myths and are loathe to rethink what we have believed most of our lives. Miss O’Learys cow probably did not really start the Chicago fire and Elliott Ness and the Untouchables were not the men who brought Al Capone to justice. And it wasn’t the Wright Brothers who cracked the code of human flight, but one brother, Wilbur Wright, who is the man primarily responsible for the fact we can get on a jetliner and fly into the heavens.

When you read a biography of the Wright Brothers there is a standard format. First, they are adjoined as two brothers who act as one. They both became interested in a toy helicopter their father brought home when they were children. Then they both started a printing press, a bike shop, then they both became fascinated with solving the problem of human flight. They both went to Kitty Hawk North Carolina and in 1903 Orville flew for twelve seconds while brother Wilbur looked on. Neither brother had an interest in sex, both dropped out of high school and lived at home their whole lives and were looked after by their sister Katherine. Everything they did was a perfect fifty percent division of talent and responsibility. This is the Wright Myth that has come down to us in children books and serious biographies. The latest of course is David McCullough’s and this perfect union of talent and intellect is preserved.

The truth is much different. It is the story of one man whose life was changed by a childhood accident and then came a vision. A vision to fly. This one man then read up on everything known about human flight then contacted the Smithsonian for information and then contacted the United States Weather Bureau to find out where the winds blew at a constant speed. He then built a flying wing, then a glider, and then he went down to Kitty Hawk North Carolina … alone. Then he made contact with the most famous aeronautical scientist of his time Octave Chanute and began a five hundred letter correspondence over ten years that would crack the physics of flight and rewrite the known data on lift and the design of wings. That man was Wilbur Wright

The myth is more entertaining in a way. We like to think teamwork can overcome most problems. The lone individual who magically comes up with a poem, a song, a book goes against our notion that we are created equally. It is disconcerting to think one person should be blessed with the ability to see or understand what others could not. But Wilbur Wright was such a man and he is the one who broke the code of controlled flight down in the hot sands of Kitty Hawk North Carolina. His brother Orville while a gifted mechanic never had the insight that would allow him to go where others had not and come up with the basic design that all airplanes use today.

So where did this myth come from? It came from a confluence of death, controversy, and a biography. Wilbur Wright died in 1912. His brother Orville would not die until 1948. In those ensuing years a biography was written at the very time Orville Wright was in a knockdown fight with the Smithsonian Institute over the fate of the 1903 Flyer. John Kelly was a good friend of Orville Wright who was contracted to write the first authorized biography of The Wright Brothers. The rule that Orville laid down was that he had to approve every page otherwise there would be no biography. The title should give us pause. A Biography of the Wright Brothers Authorized by Orville Wright. In fact, Orville almost cancelled the project several times, but one thing was clear: this would be Orville’s version of what happened in Kitty Hawk and a perfect fifty percent of credit would be ensured.

What most people don’t know is that Orville Wright sent the 1903 Flyer to London in 1928 with no intention of bringing it back. He became embroiled in a controversy with the Smithsonian over the credit for the first airplane capable of powered flight and used the airplane as a hedge to set the record straight. Fred Kelly’s’ biography would factor in and force the hand of the Smithsonian when no one else could, including Charles Lindbergh. When the plane finally came back Orville had died, and the Kelly biography became the Bible of the Wright Brothers and the perpetrator of the Wright Brothers myth.

What is amazing is how the Kelly version of events has endured. The story is a good one. Two bothers without any real vices, passions, faults, band together and go down to Kitty Hawk North Carolina and three years later they are flying. It is a very American story with homespun simplicity and teamwork combined with men so wholesome they have no desire for anything but to fly. The truth is more complicated, messy, and infinitely more human. Sex, deception, greed, and envy are the ingredients of the real Wright Brothers Story. In that way, it is very human story and the first step to demythologizing two distinct individuals … who also happened to be brother.