‘That was wild’: Pelosi and Schumer corner Trump as he spews lies about the border wall - and insists he’s ‘proud’ to shut down the government 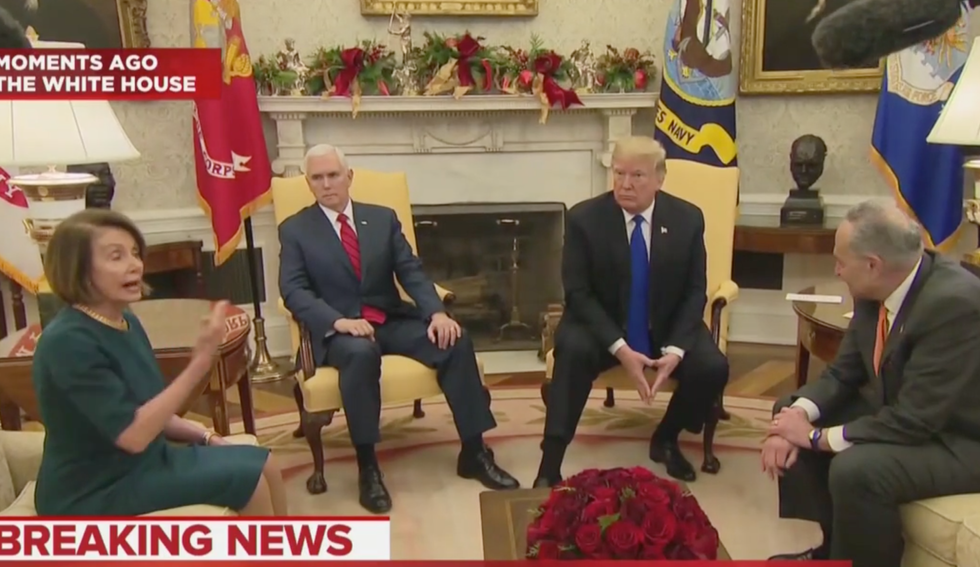 In a truly remarkable meeting on Tuesday, Donald Trump and Mike Pence met with Democratic leaders Nancy Pelosi and Chuck Schumer to discuss a pending government shutdown over the president’s demand for border wall funding.

The meeting unfolded as cameras in the room captured Trump falsely claiming that “a lot of the wall is built.”

“So we have done a lot of work on the wall, and wall is built, and lot of people don't know that and a lot of the wall is renovated,” Trump claimed.

“We have a lot of disagreements here,” Schumer said, noting that the Washington Post fact-checked Trump’s claim about the wall being built.

“[They] gave you a whole lot of Pinocchios,” Schumer said.

The president grew increasingly frustrated with the Democratic leaders, at one point remarking that if he doesn't get what he wants, he'll gladly shut down the government.

“I am proud to shut down the government for border security, Chuck,” Trump asserted. “I will be the one to shut it down.”

Pelosi and Schumer both insisted that Trump should not shut the government down over border wall funding, with Pelosi branding the move “the Trump shutdown."

Speaking with MSNBC’s Andrea Mitchell after the meeting, reporter Peter Alexander remarked, “That was wild.”

Watch the full videos below: