The Wall, the Shutdown, Mattis, Syria, Afghanistan - Trump ends 2018 with a tidal wave of incompetence 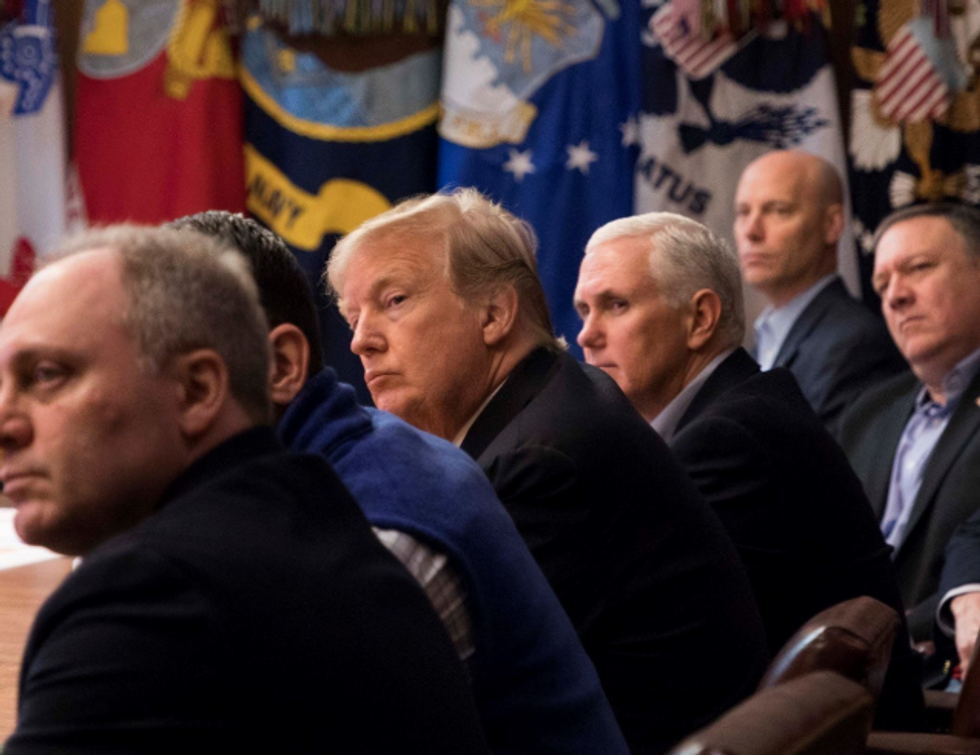 According to the latest reports, Trump was still saying he would move ahead with a partial government shutdown today, rather than accept a budget without the Wall.

Under pressure from the most conservative of his supporters, Trump is betting that this is the moment to take a stand, rather than sign the usual, last-minute, kick-the-can-down-the-road temporary delay otherwise backed by his Republican congressional majority to a new Congress with a Democratic House majority.

Let’s be clear here. We’re all losing. But rather than appearing to suffer a personal defeat, the president is making the rest of us feel it, too.

As the rest of the day’s news has made clear, this president cares only about his own opinion about matters financial, security, immigration or national defense, and will ignore advice–or suffer the loss of important advisers like James T. Mattis as defense secretary over the abrupt withdrawal of troops in Syria and Afghanistan. The wall has been central, but not alone in causing heads to shake.

As Trump becomes more and more isolated, it makes the full range of White House action based on gut and campaign promises and virtually no actual information much more important–and potentially dangerous.

In this one week, we’ve seen major disagreements about monetary policy, troop deployment and now, whether we actually have a working government.

Regardless of the outcome, however, the wall debate shows its sheer ugliness in revealing to what lengths the parties must go now to determine whether to pony up $5 billion just to meet campaign promises of Trump.

Indeed, the ineptitude of waiting until the last minute makes clear several things that will prove of lasting interest:

Perhaps we can remind all of these people that these are the ones elected to run the government, not to shut it down. These are people who are supposed to do their jobs in large part without partisanship.

Instead, we have a president under fire on all parts of his administration, the subject of multiple investigations, sending out anemic spokesmen to offer babble in the face of prosecutorial facts, trying to bluster his way to a personal goal that has either missed its moment or never really had it. It looks now as if he will have to eat his own proposal.

We have a Congress that wants no part of a wall and another $5 billion in deficit spending, and we have a few thousand Central Americans at the border waiting restlessly for a chance to make their pitch for asylum.  To Speaker-in-Waiting Nancy Pelosi’s point last week, the Republicans don’t seem to have even the requisite number of their own votes in the House, never mind that of the Democrats.

What I see is that Trump has the time and attention to tweet hateful messages, get involved in the military prosecution of a single Army officer facing murder charges, has the temerity to attack the French government in its handling of street protests, and shows no understanding of the complexities of healthcare in America. But the wall, and by extension, Mexican underwriting of its construction, can’t even keep enough of his focus to win the day.

We see a flailing, bloviating egomaniac, more concerned with covering his rear end than in protecting my interests as a citizen—interests that have nothing to do with building a wall. Some of us rely on government services, whether they are agricultural inspections of food or protection against communicable disease. Am I missing something here?

That Congress and Trump are finding the easiest path of extending government spending by two or three weeks just to get by the holidays will not solve the problem that comes together under the mantle of comprehensive immigration issues. Instead, only some very focused and hard work is required to get to practical, enforceable, understandable rules.

We can be sure that a wise, intelligent, thoughtful approach is not on the agenda. The politicians just don’t think we will insist on such a discussion. It is much easier to rely on slogans that are fully resistant to the real problems of real families whether in the United States or in Honduras or Guatemala.

Set aside the idea that $5 billion is too much to pay for a bad solution, and not nearly enough to pay for a wall, even if you think it is a good thing. The Rand Institution is among those who argue that walls generally have proved bad ideas for containment. The first thing they do, Rand argues, is to promote the digging of tunnels, though mostly for drug traffic rather than for illegal human routes into the United States.

The discussion about the wll too easily slips into xenophobic talk about how migrants are criminals or disease carriers or trying too hard to reach the gravy train that they believe the United States to be.

If Trump and Miller are so confident in their belief that a wall is an American demand, let’s look to a new GoFundMe campaign that supporters have started to raise the money outside of government; already 40,000 have contributed about $7 million, which is a bit short and raises the question: Where does the money go? The Trump Foundation? Or commit to the government version of this: a bond initiative in which the government goes to the markets to sell the bonds. Instead, they play with my tax money against my services. Don’t they understand that this angers me a great deal?

What’s been lost here in the avoidance of actual deal-making is that the White House needs to put some immigration chips on the table to get Democrats to do something other than smirk. Instead, Trump and company are relying on the same bullying behavior that seemingly was rejected “bigly” in the November elections.

In the meantime, this stalemate over the wall portends really bad things for needed bipartisanship in Washington. The future of healthcare is teetering on unsteady legal claims, the Chinese and the Russians are chewing away at our long-term alliances and our sense of security, the North Koreans and Iran are openly calling us bad names and continuing with weapons development that we abhor. The Syria decision does show that there are bigger stakes at hand than Trump’s campaign promises.

The wall and the war over the wall ought to be telling us something important about how we are resolving problems.

Indeed, the emergent bipartisanship on a bill to reconsider criminal justice sentencing over drug crimes seems to exemplify exactly what we can achieve, if we build consensus rather than attack one another.