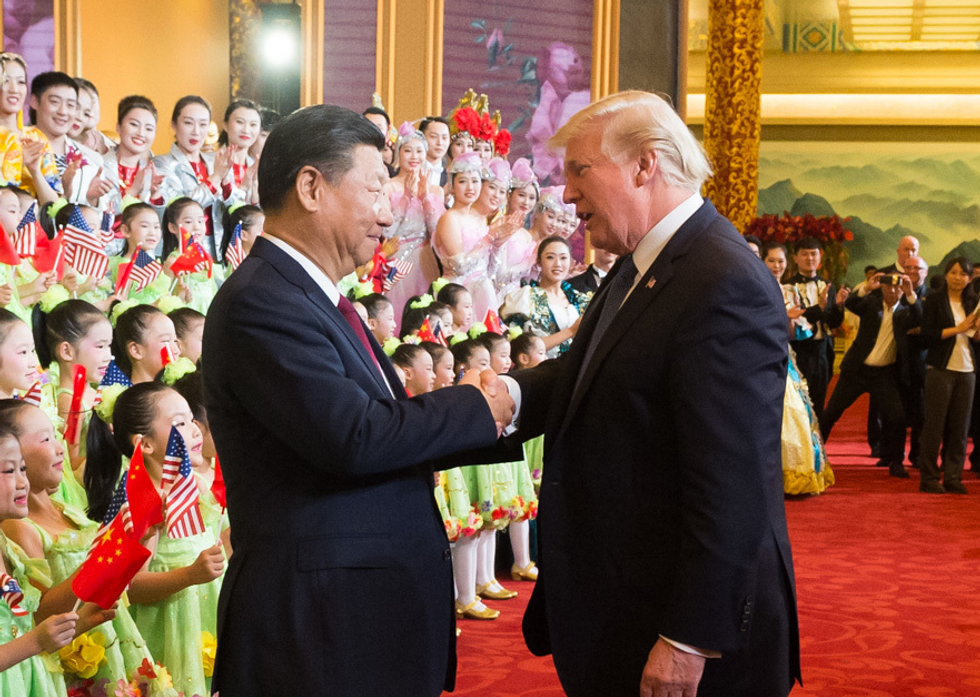 In a pair of tweets Wednesday, President Trump urged China to crack down on fentanyl, which he described as a “horror drug,” and predicted “incredible results” if China would start executing people for fentanyl-related offenses.

Fentanyl is an extremely powerful synthetic opioid linked to tens of thousands of overdose deaths in the U.S. in recent years. Chinese chemical factories are believed to be the primary producers of fentanyl and related synthetic opioid analogs, which are then mixed in with other illicit drugs, making them even more dangerous than they were on their own.

Trump’s tweets came just days after he errantly praised China’s President Xi Jinping for agreeing that China would “designate Fentanyl as a Controlled Substance, meaning that people selling Fentanyl to the United States will be subject to China’s maximum penalty under the law.”

In reality, China made fentanyl and five fentanyl products controlled substances back in 2015 and promised President Obama it would “crack down” on it in 2016. Yet, the flow of fentanyl continued and fentanyl-related overdose deaths continued to climb.

And in reality, China is already most likely the world’s leading drug executioner. The only reason for any doubt is that China does not provide data on how many people it executes for drug offenses, but according to Amnesty International, “thousands of executions…were believed to have been carried out in China” last year.

China’s closest competitor in the gruesome race to execute drug offenders has been Iran, where Amnesty says more than 200 were hung in 2017, but, recognizing the futility of the hardline approach and heeding pressure from European funders of Iranian anti-drug efforts, the Islamic Republic has now moved to greatly reduce the number of drug executions.

But as has been evident from his support of bloody-handed Philippine President Rodrigo Duterte, who has presided over a war on drug sellers and users that has left thousands dead, Trump has a fondness for the death penalty. And despite the lack of any evidence that killing drug offenders actually leads to a reduction in drug use or trafficking, he wants more.

That brought a quick response from the Drug Policy Alliance (DPA), which ripped into Trump’s cheerleading the death penalty in China as “morally repugnant” and instead urged responses to the fentanyl crisis that might actually achieve something.

“Draconian criminal punishments for fentanyl will actually make the problems associated with this drug much worse than they are now,” said Grant Smith, the DPA’s deputy director of national affairs. “This won’t reduce addiction and overdose deaths in the U.S., but it will incentivize the proliferation of even more potent drugs that will further exacerbate the crisis. President Trump’s push for China to execute more of its citizens for drug offenses is morally repugnant and ignores the decades-long failure of extremely harsh drug policies here in the U.S.”

Instead of lobbying for harsh, but inhumane and ineffective, drug policies in China, Trump would better address the overdose crisis by implementing proven harm reduction measures, Smith added.

“Fentanyl has indeed become the leading cause of overdose deaths in the U.S., but health-based measures are far more effective than criminalization,” he said. “Interventions like drug checking, naloxone, supervised consumption spaces, and expanding access to evidence-based treatment are urgently needed to reduce fentanyl-related deaths.”

But the Trump administration isn’t into that. In fact, the Trump Justice Department just recently went out of its way to promise a crackdown on any cities that try to open safe injection sites as a means of reducing overdose deaths and the spread of blood-borne diseases. He would rather American drug users die and Chinese drug sellers be killed than come up with effective responses that would actually save lives.