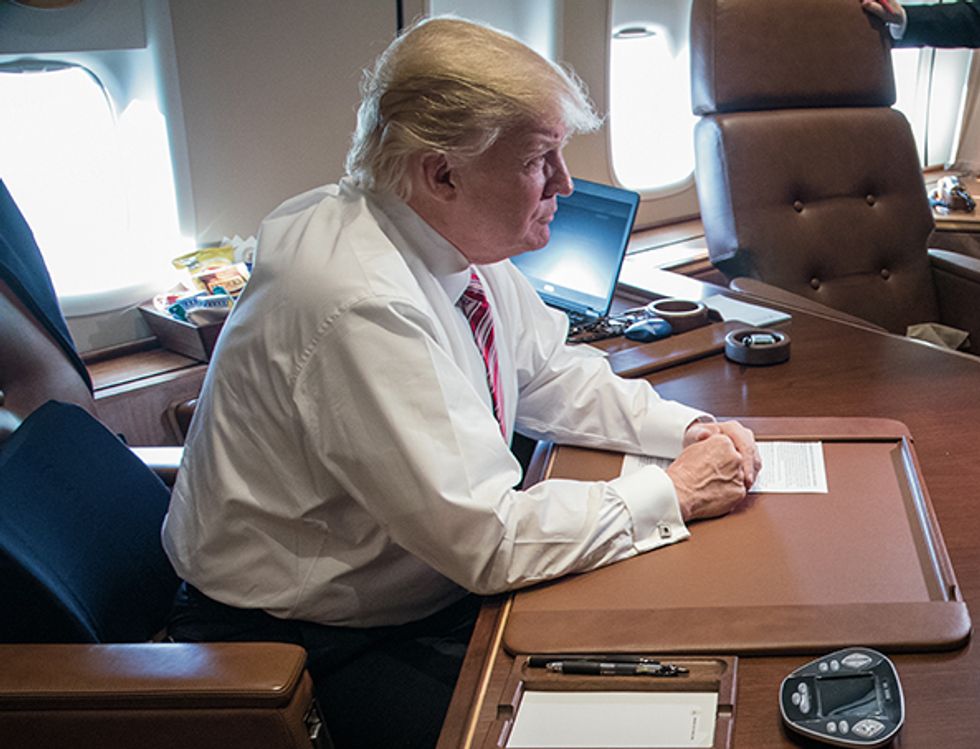 President Donald Trump talks to members of the press in his office aboard Air Force One during a flight from Philadelphia, Pennsylvania, to Joint Base Andrews in Maryland, January 26, 2017. (Official White House Photo by Shealah Craighead)
Sarah Toce
and
The New Civil Rights Movement
December 28, 2018

It's been six days since the government began a partial shutdown under the direction of President Donald J. Trump. Now, a new poll shows what some are saying could possibly be the beginning of the end for Trump - a nose dive in the court of public opinion.

As Mueller continues his Russian election interference probe, the American people are already casting their "border wall" verdicts - guilty. In fact, the Morning Consult National Tracking Poll had some decidedly grim statistics for the troubled Commander-in-Chief and his extremely white base.

The findings show that only 39% of respondents approve of Trump, while 56% don't. To put it into perspective, he's about as popular now as he was in August 2017 after the Charlottsville protests.

A majority of Trump supporters polled also believe the president won't be able to obtain full funding for his border wall - a whopping 52% of them.

Then there's this: 43% plurality says he is mostly to blame for shutdown; 53% also say he didn’t do enough to stop it from happening.

The poll was conducted between Dec. 21-23, 2018. Registered voters were surveyed two hours before some government agencies shut down amid an impasse over wall funding. 39% of registered voters — including 80% of Republicans — approved of Trump’s job performance. However, 90% of Democrats surveyed did not approve (equating to 56%). As for Independents, that percentage was even higher at 57%.

Approximately 63% of those surveyed said they understood what caused the shutdown. To follow that up, 43% of registered voters said Trump was mostly to blame for the shutdown.

1,992 registered voters took part in the newest national online survey where 78% of voters said they had heard at least “some” about the government shutdown rumblings rotating throughout the current news cycles.