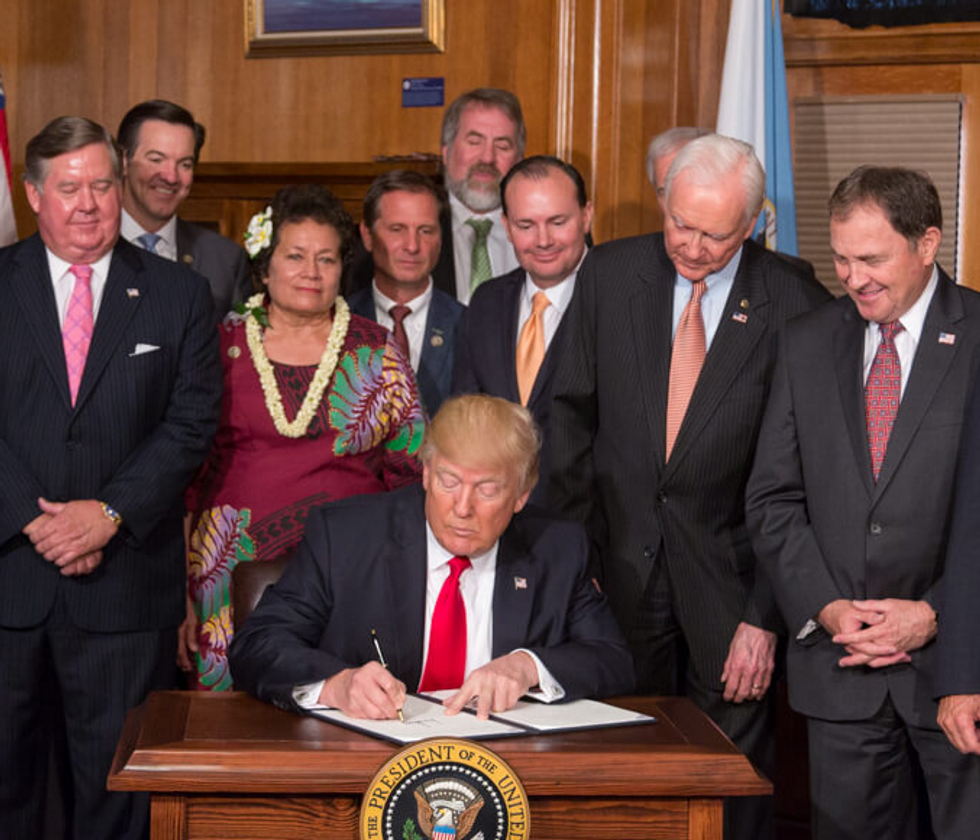 After receiving a barrage of negative publicity this week for comments he made to CNN’s Manu Raju about President Donald Trump's hush money payments, outgoing Sen. Orrin Hatch (R-UT) has issued an official retraction and admitted that the statements were “irresponsible.”

When Raju asked Hatch about hush money paid on Trump’s behalf during he 2016 presidential election, Hatch commented Monday, “The Democrats will do anything to hurt this president.” And when Raju noted that hush money allegations were made by U.S. attorneys for the Southern District of New York, Hatch responded, “OK, but I don’t care. All I can say is he’s doing a good job as president.”

A backlash quickly followed. And Hatch issued a formal retraction Friday, saying, “Earlier this week, in an unplanned hallway interview with CNN, I made comments about allegations against the president that were irresponsible and a poor reflection on my lengthy record of dedication to the rule of law.”

Attorney Michael Cohen, Trump’s former personal attorney, has been sentenced to three years in federal prison for a long list of crimes he has pleaded guilty to, ranging from campaign finance violations to bank and tax fraud. The eight crimes Cohen confessed to on August 22 were for charges brought about by federal prosecutors for the Southern District of New York, but in late November, Cohen also pled guilty to lying to Congress about his role in plans to build a Trump Tower in Moscow—and that plea was made as part of his agreement with Special Counsel Robert Mueller.

In pleading guilty to the hush money campaign finance violations, Cohen said Trump directed him to carry out these crimes. He has since said that Trump was aware doing so was a crime and did so to help his campaign. Many legal experts say these comments, which have been supported by the New York federal prosecutors and accepted by the judge in the case, directly implicated Trump in crimes.

In his retraction, Hatch was critical of Cohen but avoided saying anything negative about Mueller. Hatch stated, “While I don’t believe Michael Cohen is any kind of reliable voice in this process, I have expressed confidence in Bob Mueller and his investigation countless times, including writing in the Wall Street Journal that he must be allowed to complete his investigation.”

Hatch added that he took allegations of campaign finance violations seriously, noting that back in August, he stated that they “can’t be ignored.”

Hatch went on to say that he has “long believed our criminal code is simply too large.” The senator elaborated, “I’ve proposed legislation to reduce overcriminalization, simplify our criminal code and reinvigorate criminal intent requirements.”

Now 85, Hatch was first elected to the U.S. Senate in 1976. In January, Hatch announced his retirement from the Senate—and former Massachusetts governor and 2008/2012 presidential nominee Mitt Romney decided to run for his seat. Romney, a fellow Republican, won the general election on November 6 and will be taking over Hatch’s seat in January.