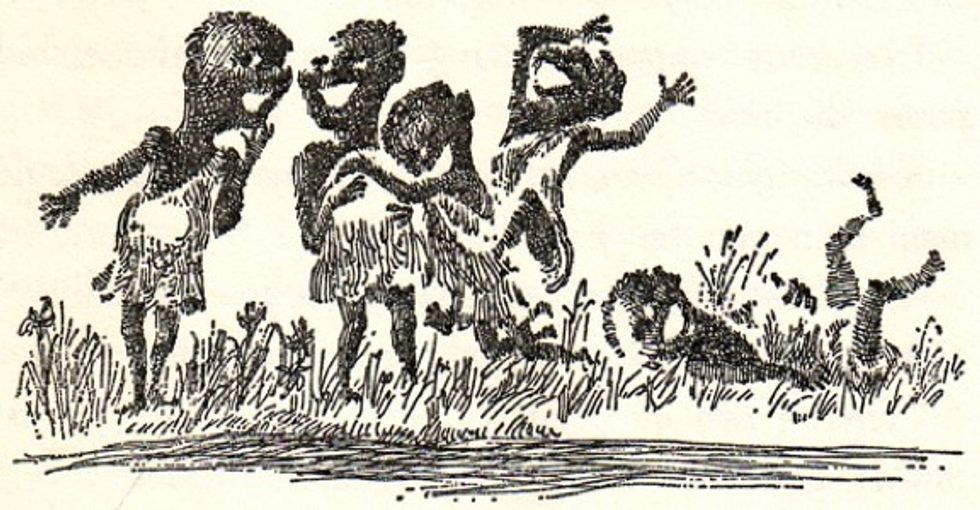 Countless Americans grew up with Roald Dahl’s captivating 1964 children’s book, Charlie and the Chocolate Factory, or with one of its two film versions—in 1971 and 2005. Who knew during all this time that this most beloved story is shot full of white supremacist messages worthy of the Klu Klux Klan? But now we do, and now is the time to replace this destructive narrative for one that tells healing truths. Netflix has announced that it will create a series of animations from sixteen of Dahl’s children’s tales, and most prominent among them, Charlie and the Chocolate Factory. And this past June Newsweek reported that Hollywood is considering yet another film knockoff of Dahl’s story, only this time as “a prequel,” explaining how Willy Wonka “acquired his riches and his legendary chocolate factory.”

Inverting history in a way that would have shocked Dahl, the new film may star the African American actor, comedian, and singer Donald Glover as Wonka. Newsweek quoted Dahl’s widow, Felicity d'Abreu Crosland Dahl, as saying that her former husband’s original scheme was to have Charlie, the boy who finds the golden ticket that gets him into Wonka’s legendary factory, be “a little Black boy.” In a BBC radio interview, she declared it a “great pity” that Dahl (who at the time was married to the American actress Patricia Neal) bowed to his publisher’s wishes and dropped the idea.

This latest possible remake would go far beyond anything Dahl could have envisioned. But will it go far enough? Does Donald Glover, or anyone else associated with this new effort fully understand what is at stake?

Despite what Felicity Dahl implied, Roald Dahl never considered any black roles for his famous story that were not right out of the Sambo tradition, British imperialism, or slavery. Indeed, the workers for his chocolate factory, the Oompa-Loompas, were slaves. When Charlie and the four other golden ticket holders and their parents first spied the Oompa-Loompas Wonka explained that the workers were not made of chocolate, but they “are real people! They are some of my workers!” He had imported the tiny black people “direct from Africa!” They belonged to “a tribe of tiny miniature pygmies known as Oompa-Loompas. I discovered them myself,” Wonka exclaimed. I brought them over from Africa myself—the whole tribe of them, three thousand in all. I found them in the very deepest and darkest part of the African jungle where no white man had ever been before.”

Wonka informed Charlie and his companions that the tribe had been starving, subsisting on green caterpillars but longed for cacao beans; “oh how they craved them,” he said. He bargained with the tribe and promised that if they agreed to “live in my factory” they could have all the cacao beans they wanted: “I’ll even pay your wages in cacao beans if you wish!”

So, the black pygmies traded their freedom for permanent enslavement and all the cacao beans they could eat. After the tribal leader agreed to stop eating green caterpillars and work for “beans,” Wonka “shipped them over here, every man, woman, and child in the Oompa-Loompa tribe. It was easy. I smuggled them over in large packing cases with holes in them, and they all got here safely.”

Because Britain the slave trade had outlawed the trade in 1807, as Wonka alluded to, he smuggled the slaves into England in packing cases, in conditions that sounded almost as horrific as the Middle Passage. And so that no one would miss the point, Joseph Schindelman’s images of the Oomp-Loompas in the book showed them as animal-skin clad jovial Sambos who just loved their labor.

A slave galley even made an appearance in the book, one powered by the pygmies who rowed on a river of chocolate. To further emphasize the slave analogy, Dahl introduced whips into the tale, “WHIPS—ALL SHAPES AND SIZES.” And why whips? Well, “For whipping cream, of course!”

Riveting the idea that these black pygmies were Wonka’s property, to which he could do whatever he wanted, the Oompa-Loompas were subject to hair-growing medical experiments and product testing that turned the little pygmies into blueberries. The entire Wonka enterprise relied on slavery and complete racial subordination.

Dahl, as he later confessed, grew up with an imperialist frame of mind. While in prep school, for instance, and dreaming about gold and an adventurous life that might be awaiting him in Africa, he remarked, “Sometimes there is a great advantage in traveling to hot countries where niggers dwell.” He carried that attitude to Africa just before World War II when he labored for the Asiatic Petroleum Company in the former German East Africa, then known as Tanganyika. His imperial enterprise and his experiences with the servants he commanded, and whom he labeled “boy,” and the native Africans he encountered, would shape his racial views and tincture almost all his future writings.

Even in 1982, long after the NAACP had condemned the way he presented Africans, and after he dropped the black Oompa-Loompas in the revision of the book, he continued in the same vein. His first draft of The BFG, the friendly giant at the center of that book emerged as the very worst imitation of a Zip Coon figure, a black, flat-nosed, giant with “thick rubbery lips . . . like two gigantic purple frankfurters lying on top of the other.” For once, an editor spoke up. Dahl’s new editor, Stephen Roxbourgh at Farrar, Straus, and Giroux, properly denounced Dahl’s characterization as a “derisive stereotype.” Dahl conceded the point, responding: “the negro lips thing is taken care of.”

If we are to surmount the ugly legacy of Dahl’s work, the kind of imagination that Lin-Manuel Miranda applied to his blockbuster Alexander Hamilton is necessary. But to create a counter-narrative of America’s origin story that attacks white supremacy racial subordination, Miranda needed not just talent and imagination, but awareness, facts, accurate knowledge of this nation’s (racial) past. It’s a lofty goal, but it can’t be done right without the awareness that history and knowledge brings.

For a full analysis of Dahl’s attitudes and his writings, see my essay “Innocence Betrayed: Charlie and the Chocolate Factory and the Deep Roots of White Supremacy,” http://www.processhistory.org/yacovone-dahl-racism/

Donald Yacovone is an Associate at the Hutchins Center for African and African American Studies, Harvard University and an Athenæum member.