Standing Rock changed the course of this doctor’s entire life 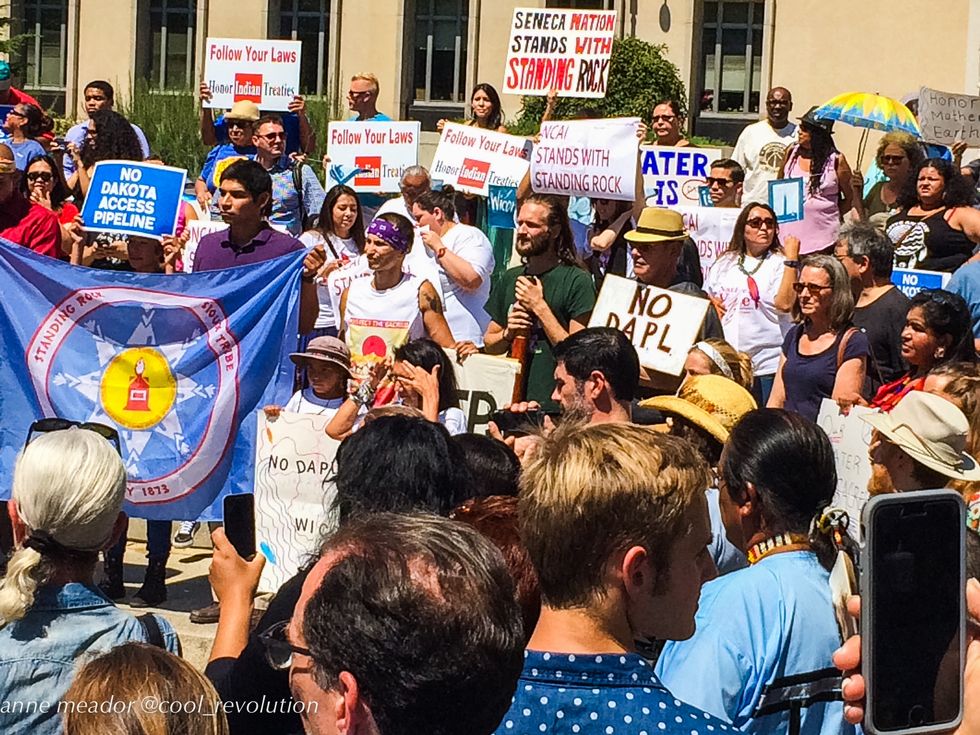 In November 2016, emergency physician Dr. Tara Sood rushed to volunteer with the Indigenous-led protest against the construction of an oil pipeline across the water supply for the Standing Rock reservation. Sood is one of many activists profiled in Road Map for Revolutionaries by Elisa Camahort Page, Carolyn Gerin, and Jamia Wilson. Here she recalls the protest and how “one of the most soulfully powerful places I’ve ever been” continues to inspire her activism.

I showed up in Cannon Ball, North Dakota (the largest community near the Standing Rock protests), at a basketball gym that was acting as an evacuation center for people too old or sick to remain in camp. Two nurses, retired friends from Portland, were there, as was an OB/GYN who had been volunteering for a few days and was just leaving. They showed me around the gym, where there was no heat, but it was indoors. People were sleeping on cots and bleachers. Supplies were stored. There was a kitchen, bathrooms, and showers.

We also had a place to sit and talk to people to see what their needs were. If they needed to go to the hospital in Bismarck, no ambulance would come if called, so someone had to volunteer to drive them. Someone always did.

There was every type of person there. There were people who felt left out in their own worlds and found community. There were “protest tourists”: kids who sought to socially document their “commitment,” when in reality, they sat around and did nothing. But mostly there were regular, everyday people who felt they had to do something to fight against the injustice. Nurses, lawyers, veterans, Marines, students, homemakers, farmers, journalists, construction workers, engineers—people from every walk of life. The majority of the people felt they were fighting for a cause bigger than themselves. I’d say the ratio of committed individuals to protest tourists was probably 500 to 1. Most of the people in camp helped in every way they could—including cleaning the compost toilets, shoveling massive amounts of snow, cooking, cleaning, building shelters, hooking up solar panels, and more.

There was little formal organization. However, if you were a Native elder, people deferred to you. There was a sense of respect. Every female elder was called “Grandmother.”

Of the 100 to 200 people who were in that gym on any given day, only a handful of folks stayed at the gym; the vast majority were in camp, and they preferred to be in camp.

Ultimately the gym-cum-evacuation center was shut down because the city needed to take back the space to use for upcoming planned Christmas activities. So after one week, I headed out to the Oceti Sakowin Camp, the encampment that was closest to direct protest actions.

At the Oceti camp, there was a medic/healer council and section. There was an herbalist, midwives, mental health practitioners, EMTs, paramedics, social workers, body workers, nurses, and another new doctor.

It was not truly organized, and there was no medical supply chain. We didn’t always have resources needed to take care of people. You’d hope to catch people going into Bismarck and give them a list of things that were needed. People were taking back roads because the police had closed the highway. Those of us at Standing Rock had to take alternate routes to get to Bismarck.

Large numbers of donations were coming in, but because of the lack of organization, the donations often weren’t providing what was really needed. As an example, when news got out that the authorities were teargassing the water protectors, people started sending Mylanta, but we had bottles and bottles long after it wasn’t needed anymore. Or people sent heat packs that can’t be stored below certain temperatures and so were useless. We had a few supplies, but not necessarily the right amounts of the right things.

I saw people who willingly sacrificed treatments or medications they needed because there was such limited supply, in case “someone else needed it more.”

This also seemed so different from the real world.

The typical story was that the police would arrest people, strip them, and put them in buses with no heat, hence the hypothermia. There were reportedly beatings, and I saw lacerations and one woman who lost an eye to a rubber bullet. Many Americans can’t imagine the level of mistreatment that happened at Standing Rock—right here in the United States. We were witness to the courage of the protesters at Standing Rock as well as to the brutality of those sent to “protect us.” Three weeks at camp changed my life and informed my future activist activities.

The camp was one of the most soulfully powerful places I’ve ever been. I brought nothing to eat or drink, and every day people would bring me supplies and check on my well-being. There was such a strong sense of community.

Coming back was harder than I expected. In addition to witnessing difficult “this can’t be happening” experiences, I returned to hear from people in my life who seemed curious about my work there, but who didn’t really care about what was happening. But Standing Rock inspires me to continue.