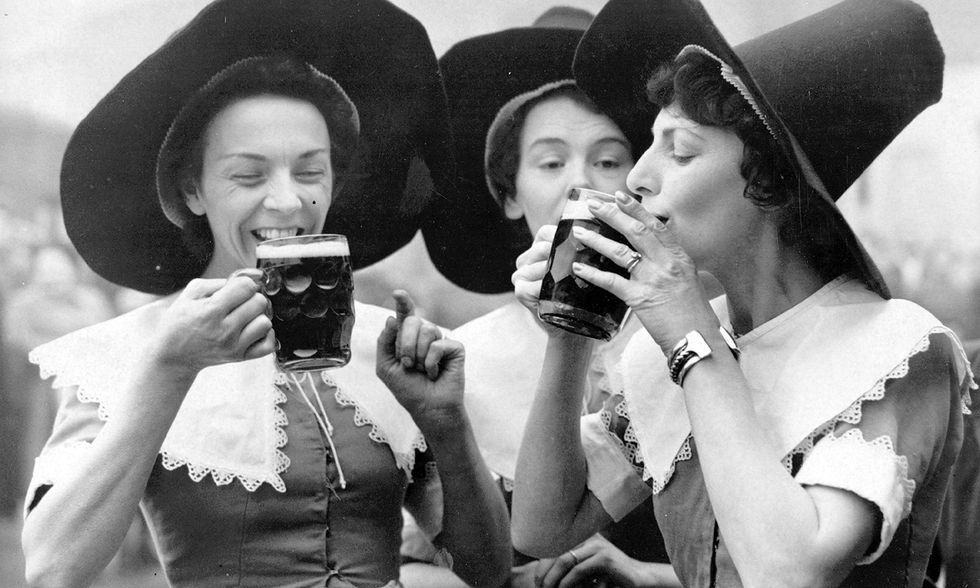 In Brew Beer Like a Yeti, Jereme Zimmerman gives brewing tips and takes readers on a ride through the history of beer making. In this excerpt, he finds evidence that down the ages, women played a central role in developing the craft behind your favorite microbrew.

Sumer, the civilization that emerged in about 3400 BCE in what is now southern Iraq, is known as the cradle of civilization, and the record holder for the oldest known drinking song, “The Hymn to Ninkasi.” More accurately, the hymn is a song about the making of beer, describing in detail the process of malting grain; making “beer bread” (bappir) flavored with honey, dates, and various herbs from the malt; and then brewing beer from the bappir after mixing it with hulled grain and warming it to create a mash. The mash was then cooled on reed mats, mixed with water in a large vat, and sweetened (likely with honey) to initiate fermentation, after which the beer was filtered into a vat.

Ninkasi was the Sumerian goddess of beer and the chief brewer of the gods, but she also appears to have been the personification of beer itself, as the hymn starts out saying that Ninkasi was “given birth by the flowing water,” indicating that she first came about from water that was turned into beer wort. She was a very popular goddess. Her name can be translated to either “lady who fills the mouth (with beer)” or “she who sates the desires.” The gods and goddesses of Sumerian mythology took part in much beer drinking, sometimes to their detriment. One example comes from the poem “Inanna and Enki,” in which Enki, the Lord of Wisdom, sits down to drink and dine with Inanna, the Queen of Heaven, and after “their hearts had become happy with drink,” he unwittingly gives the goddess “the over one hundred divine decrees which … control the culture pattern of civilization itself.”

In Europe, up through the Middle Ages, brewing, grain production, and malting were domestic tasks alongside food preparation and crop maintenance. For the most part, women ran these operations. These “brewsters” or “alewives” brewed primarily for their own households, but would also sell excess to friends and neighbors. It wasn’t the most profitable work, paying much less than what most men made in their trades, but it did help pay the bills, and some industrious brewsters managed to make a thriving business, hanging brooms above their doors to indicate when a fresh batch was ready.

Alewives were often also their community’s herbalists. Since many of their ales were made with herbal combinations with specific medicinal qualities, townspeople would come to these women for help with health problems. But the paternalistic society that dominated the Middle Ages could only tolerate giving women this much sway for so long. Disgruntled men who ran the power establishments and superstitious peasants began associating the brewing cauldrons and brooms with witchcraft, not to mention the tall, wide-brimmed hats alewives wore to stand out while selling their wares in the marketplace. All of these factors combined to cement the image of the conniving, cackling witch with a wide-brimmed hat and broomstick indelibly into popular culture.

As brewing transitioned from “just” a household task to a profitable commercial venture, the role of women was diminished. Women never stopped brewing entirely; they often kept up with the low-paying, low-skill aspects of brewing—or continued to run much of the business—while men were the faces of the business and eventually took over the trade entirely. So remember this, fellas, we have women—many of whom were publicly reviled and privately relied upon—to thank for the beer we drink today.

This excerpt is from Jereme Zimmerman’s Brew Beer Like a Yeti (Chelsea Green Publishing, 2018) and is reprinted with permission from the publisher.