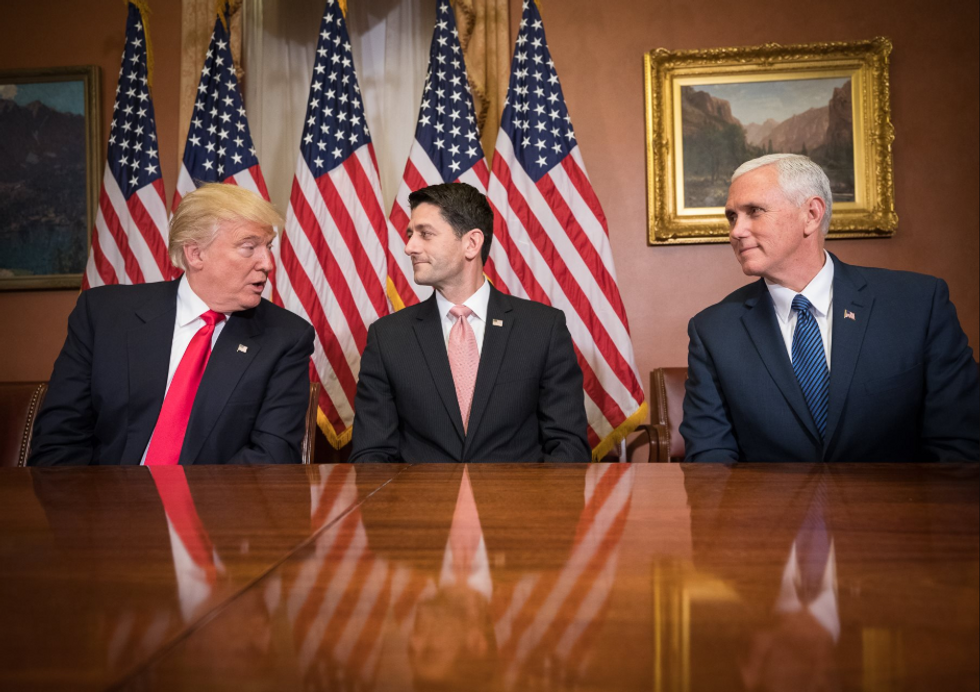 We can now declare it official: The Republican Party has been completely consumed by Donald Trump and now should be regarded as little more than another shoddy and overpriced Trump® property.

Politico's Alex Isenstadt reported on Tuesday morning that the GOP has adopted an unusual campaign strategy going into the 2020 elections, basically rebranding itself as the Trump party:

Under the plan, which has been in the works for several weeks, the Trump reelection campaign and the RNC will merge their field and fundraising programs into a joint outfit dubbed Trump Victory. The two teams will also share office space rather than operate out of separate buildings, as has been custom.

Republican National Committee chairwoman Ronna McDaniel — or should we start calling it the Trump National Committee? — brags that this will be the "most efficient and unified campaign operation in American history," But in theory anyway, the party is supposed to support the campaigns of thousands of Republican candidates running for federal, state and local offices, not just one guy. It's terrible the way presidential elections suck up more and more of the political oxygen every electoral cycle, and this move only promises to make that bad situation worse.

It also seems to defy common sense. Trump has never been a popular politician, winning the 2016 election on a technicality while losing the popular vote to Hillary Clinton. His reputation has only grown worse since then. Trump's disapproval ratings cracked 50 percent during his first couple of months in office and have not fallen below that since. An even higher percentage of Americans believe, correctly of course, that Trump is corrupt and liar. A recent poll found that 62 percent of respondents believe Trump is lying about special prosecutor Robert Mueller's investigation.

Moreover, the Republicans took a shellacking in the 2018 midterms, and it's mostly because Trump is such a noxious figure that he drove up Democratic voter turnout. Republicans in certain suburban areas — most famously, Orange County, California — lost districts that had been reliably Republican for generations. While there's no doubt that Trump voters really love their guy, the majority of voters clearly see an association with Trump as a negative for Republican politicians, and will vote against them because of it.

One would think that the Republican Party would see these trends and at least allow for the option of having candidates distance themselves from Trump when and where that's expedient. Instead, the party is doubling down on a stance of servile loyalty to Trump, even though all signs suggest that we'll see many more damning stories demonstrating that Trump's corruption is widespread, absolute and has infected pretty much every endeavor he's been involved in.

While there's no telling how things will play out, all signs suggest that Trump is a sinking ship and anyone who ties themselves to him has a strong chance of sinking. So it's difficult to escape the conclusion that Republican Party leaders are just authentically sycophants and authoritarians, and it's not just a cynical pose that is affected for political purposes. These are the moves of people who have been craving a strongman leader with shamelessly fascistic impulses, so much so that even the instinct to self-preservation has been abandoned in favor of loyalty to Dear Leader.

This impulse towards mindless loyalty is evident in the early advertising for Trump's 2020 campaign, spotted by journalist Yashar Ali. In one ad, Trump's campaign manager, Brad Parscale, declares that Trump has “achieved more during his time in office than any president in history," and asks supporters to call an 800 number to "let President Trump know that we appreciate what he is doing for America."

It's hard for me, personally, to wrap my mind around what it must be like to find such mendacious boot-licking appealing. The ad is built around the kind of rhetoric bandied about in North Korea to flatter Kim Jong-un. Historically, Americans have laughed at that kind of propaganda, but maybe a healthy percentage of Americans have been longing for that kind of political idolatry all along.

Playing to the minority of Americans who are Trump cultists seems like terrible political strategy, but that doesn't mean that the 2020 election will be a cakewalk for Democrats. The Trumpers may be a minority of Americans, but they will not fail to turn out to vote. If Democratic voters get demoralized or confused and fail to show up at the polls, it's entirely possible that, as in 2016, Trump can squeak by with another flukish win.

As Vox reported this week, there are now a whopping 34 Democrats who are clearly contemplating a presidential run in 2020. While some of those potential candidates are long shots, the odds are high that quite a few build up a real base of support, people who might become bitter if and when a different candidate wins the nomination. So while the anti-Trump side of this fight has far more people in actual numbers, there's reason to worry that a unified Trump coalition could best a Democratic coalition that loses voter turnout to pouting.

That's clearly what the RNC is betting on with this all-in approach to Trump. But there's ample reason to believe that their scenario of victorious Trumpian unity, is unlikely to work. The next two years will almost certainly be characterized by a steady stream of ever-worsening stories about Trump's corruption and criminality. He's already been forced to shut down the Trump Foundation, in an effort to shake off a criminal investigation that could implicate three of his children. Most Republicans will no doubt go along with Trump and his lawyer, Rudy Giuliani, arguing that crimes shouldn't count as crimes if the president they love commits them. But even a few voters pulling away as things get worse is bad news for Trump.

This level of organizational commitment on the part of the RNC is hard to pull away from.  If Trump's precarious situation gets worse, as it almost assuredly will, it will be difficult, just in logistical terms, for the Republican Party to untangle itself from Trump's orange-octopus grasp. As with an acid trip or going into labor, the GOP will just have to see this thing through to the end.