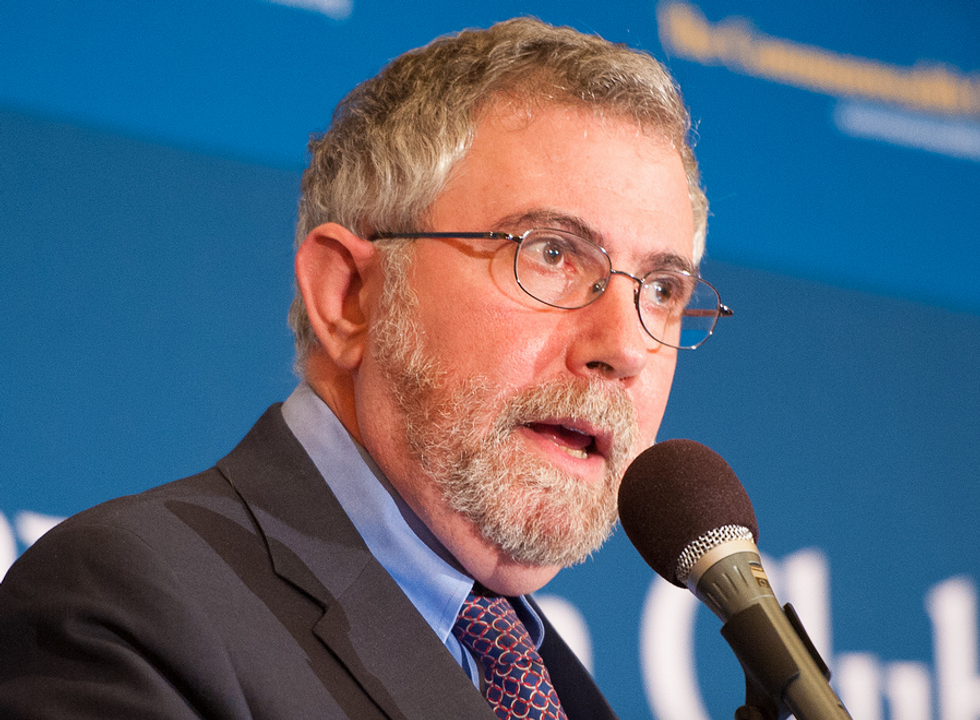 While President Donald Trump's personal scandals and the ever-increasing number of criminal investigations arrayed against him dominate the news, the stock market has faced extremely tumultuous headwinds, wildly rising and falling, often by hundreds of points, each day. Though, as always, this reflects countless factors, economist Paul Krugman argued that its movements can tell us something about Trump's presidency.

"Well, the stock market doesn't seem too happy," he wrote in a new Twitter thread. "Does this mean recession? No. But it does look as if Trumpophoria is fading, which makes this a good time to ask how that tax cut -- the only major legislation Trump will pass -- is going."

Many defenders of the president's policies — and even some of his critics — have pointed to the elevated growth in the last two quarters as a sign that, even if it wasn't a great idea, the GOP's giant tax cut at the end fo 2017 has had some positive effect on the country's economy.

Krugman noted, however, that quarterly GDP growth figures fluctuate a lot, and the recent figures are hardly unheard of, despite what the president's most enthusiastic cheerleaders have said.

He also pointed out that the most recent figures appear to show the trend of elevated GDP growth appears to be diminishing:

"To a rough approximation, then, whatever bump in growth we got over the past year is most of what we'll ever see. Now, annual growth including those two good quarters was 3 percent. But that should be compared with a baseline of normal growth, maybe 2 percent," he explained.

So what caused the bump in the growth of about one extra percentage point? In fact, it's the factor the Republican Party and conservatives have derided for nearly a decade now: economic stimulus. When President Barack Obama passed the 2009 stimulus bill to fight the 2008 recession, conservatives derided the idea as nonsense. Now, they're seeking to claim credit for the effects of that very phenomenon on the current economy.

But, Krugman, noted, it was just the tax cut funds — most received by wealthy people and corporations — that boosted the economy. With Obama out of power, Republicans finally decided to let government spending rise again:

But that wasn't the only thing going on -- there was also a real pickup in government spending; after imposing aust… https://t.co/We6ndlavWv
— Paul Krugman (@Paul Krugman)1544829483.0

"What this all looks like to me is a small payoff given the bulge in the deficit -- a multiplier well under 1 even in the short run, and likely to shrink further as higher interest rates take their toll," said Krugman. "Oh, and what about the great investment boom the tax cut was supposed to unleash? It's looking about as real as Trump's wall."