Our ladies of perpetual activism: Nuns for social justice 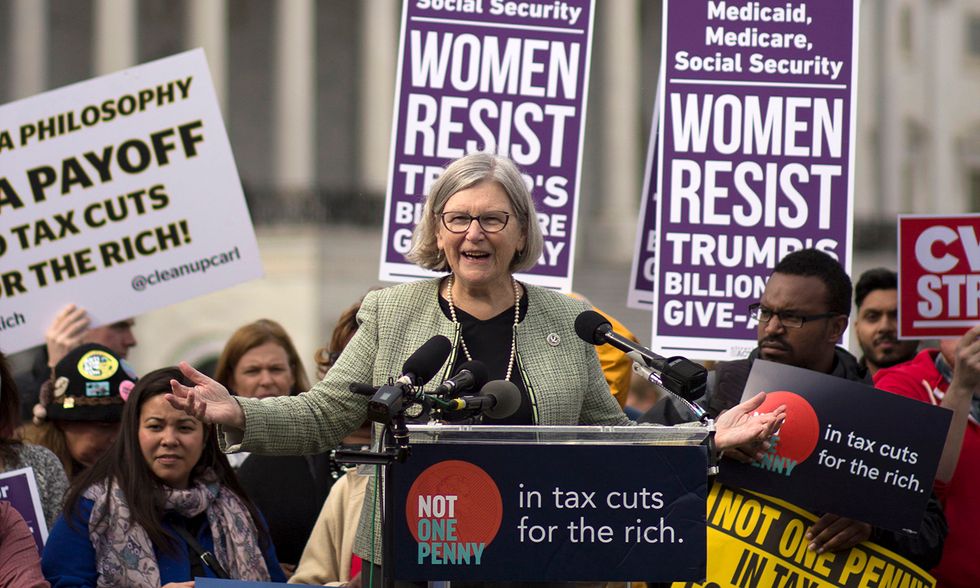 Sister Simone Campbell speaks at a Not One Penny coalition rally on Nov. 1, 2017, on Capitol Hill, where hundreds of activists protested corporate tax cuts proposed by Republicans in Congress.
YES! Magazine
and
YES! Magazine
December 28, 2018

Whether focusing on fossil fuels, social justice, or lobbying major corporations to be better stewards of the environment, these sisters believe that their faith calls them to create a more just world.

Sister Simone Campbell didn’t expect the Vatican to condemn her group, Nuns on the Bus, as a “bad influence.” Campbell didn’t let it stop her from touring the country  by bus to protest social and economic issues, though. Their latest excursion will target the 2017 tax law and encourage voter participation in the midterms.

A key element in Campbell’s religious practice is meditation. It allows her to pause and listen to what she calls “the wee voice—the Holy Spirit.” This is what she says has gotten her through the tough parts of her activist journey.

After witnessing protesters risk their lives during the civil rights movement, Campbell said, “the gospel spoke to me.” She decided then to use her faith to mend gaps in equality. Despite disapproval from the very institution she serves, Campbell says that activism requires accepting opposing perspectives. “I came to realize it’s fighting for a vision and not against a person.”

An integral part of Sister Janet McCann’s faith is her devotion to Mother Earth.

McCann and her colleagues at the Adorers of the Blood of Christ filed a complaint last year against the Federal Energy Regulatory Commission to keep a pipeline off their land in Lancaster County, Pennsylvania. Previously, they had built an outdoor chapel on the proposed route of the pipeline as an act of peaceful protest.

“We wanted to have some kind of physical witness to our faith on that property,” she said.

While judges ultimately ruled against the nuns, McCann said that their fight to preserve the environment isn’t over. She and the rest of the order are planning to establish a small solar farm near the pipeline to call attention to and combat the negative impacts of fossil fuels.

“So long we’ve been fighting this pipeline,” she said. “We want to use some of our expertise to do something for the environment.”

The Sisters of St. Francis of Philadelphia set up a corporate investment portfolio with their retirement fund in the 1980s. The sisters use their stakes to lobby more than 70 companies to be better corporate citizens.

Led by Sister Nora Nash, the order’s director of corporate social responsibility, the nuns have used their dividends to provide capital and mentorship to women of color entrepreneurs, build infrastructure in developing nations, and compel corporate giants such as ExxonMobil and Wells Fargo to measure and lessen their environmental and social impacts.

“We believe that we need to look at corporations as organizations that are accountable for their impact on health and human rights,” Nash said. “We encourage corporations to do the right thing—not just for themselves but also for the environment.”

The Trump administration’s rollbacks on environmental protections have made this type of activism even more critical to Nash and her convent.

The sisters have also lobbied airlines to combat human trafficking, gun retailers to amend their sales practices, and grocery stores and restaurants to promote healthier options.