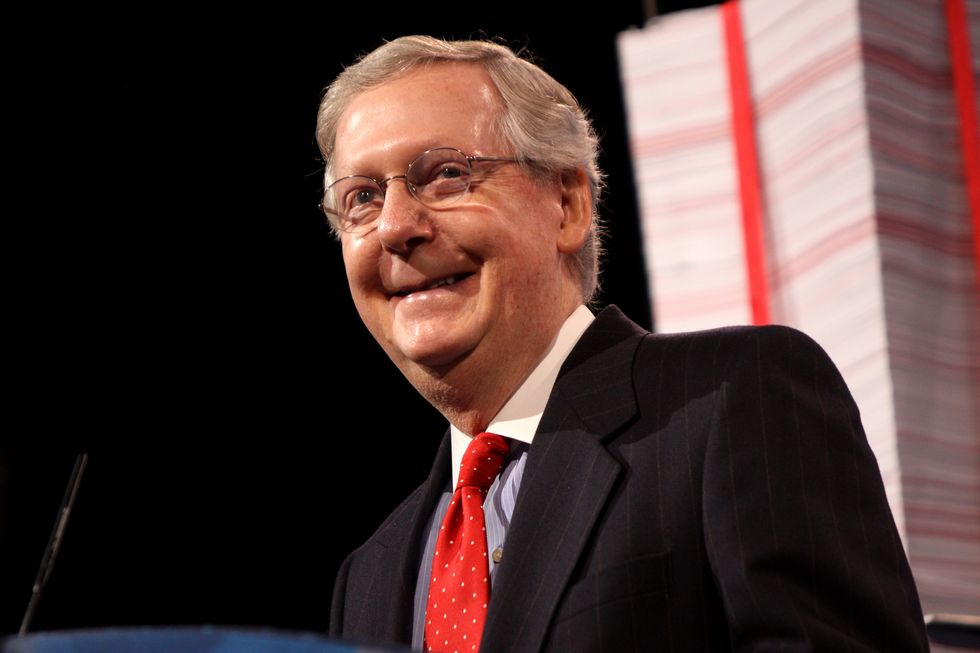 It's no secret that Senate Majority Leader Mitch McConnell (R-KY) does not like the bipartisan bill put forward in the Senate to prevent President Donald Trump from firing special counsel Robert Mueller.

But how much does he hate it? He hates it so much that he'd rather let Trump's judicial nominees go unconfirmed for the rest of the year.

That is the choice McConnell now faces. 22 judicial nominees are currently stuck in the Senate Judiciary Committee because Sen. Jeff Flake (R-AZ) is refusing to vote for any of them until the special counsel bill, crafted by Sens. Lindsey Graham (R-SC), Thom Tillis (R-NC), Chris Coons (D-DE), and Cory Booker (D-NJ), is allowed a vote by the full Senate. Without Flake's approval, Republicans lack a majority on the Judiciary Committee to move them forward.

Confirming far-right judges to the federal bench has been McConnell's top priority under Trump, and one of the GOP's only successful endeavors. So far, they have put two men on the Supreme Court, and filled dozens of lower court seats, to the point that one of every six judges on appellate courts is a Trump appointee. Some of these judges are reasonably uncontroversial and have even voted against the GOP on occasion, but a huge number of them are hard-right ideologues and many were hand-picked by the ultraconservative Federalist Society. McConnell knows that the more judges Trump seats, the longer Trump's legacy will outlast his presidency, in the form of right-wing courtroom decrees.

So why would McConnell be willing to suspend his top agenda item just to disapprove of protecting the Russia investigation?

One possibility is that McConnell is playing the long game. He knows that Flake will be gone in January, his Senate majority will grow in size by two, and then he will have the votes to resume confirming judges without having to deal with the Mueller issue.

But a better question is why McConnell even opposes the special counsel protection bill in the first place. He has never given a logical answer for that.

Recently, when asked why he opposes the bill by reporters, McConnell said, "This is a solution in search of a problem. The president is not going to fire Robert Mueller ... We have a lot of things to do to try to finish up this year without taking votes on things that are completely irrelevant to outcomes." But this reasoning makes no sense. If he simply thought the bill was unnecessary, he wouldn't need to be actively blocking it — and by allowing Flake to block votes on judges rather than take it up, McConnell is arguably wasting more time in the lame duck session than he would by letting it go to the floor.

It is hard to say what his calculus is. Regardless, he has made his choice, and he will have to live with the consequences.