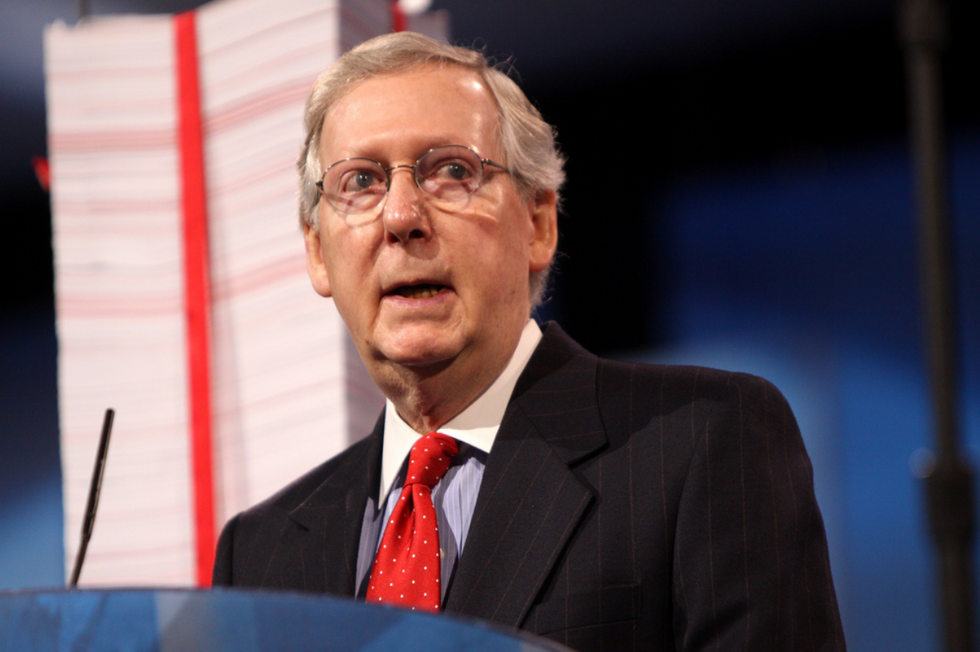 The Wall Street Journal's new interview with Senate Majority Leader Mitch McConnell (R-KY) is, for the most part, full of the usual bland dodges and preemptive scapegoating of Democrats for any potential setback to his party.

But one particular comment of his, when discussing possible Senate election opportunities for Republicans in 2020, was a lot more eye-opening.

"If you look at a map of America, there's a lot of red," he said, noting one obvious 2020 pickup opportunity for the GOP: Democratic Sen. Doug Jones's Alabama seat.

McConnell believes it was a "mistake" for voters in Alabama not to choose Roy Moore, who was credibly accused of molesting multiple teenage girls, over Doug Jones, a prosecutor who locked up Klansmen for the murders of children, in the Senate special election to replace Jeff Sessions.

While Republicans (at least those outside of Alabama) initially tried to distance themselves from Moore when these stories broke during the special election, President Donald Trump decided to double down on endorsing him and trash his accusers. The Republican National Committee then followed his lead, and although this failed to save Moore's disastrous campaign for Senate, it would form the blueprint for how Republicans stomped on sexual assault survivors during the Brett Kavanaugh hearings and confirmed an accused rapist and perjurer to the Supreme Court over the objections of women across the country.

It is worth noting that McConnell is likely to blame for Moore winning the GOP Senate nomination in Alabama to begin with. While McConnell did not endorse Moore in the primary, he engaged in ham-handed efforts to prop up appointed Sen. Luther Strange, even though voters distrusted the corrupt way disgraced ex-Gov. Robert Bentley had elevated Strange from the attorney general's office to try to buy off an investigation into his extramarital affair. In the process, McConnell pushed out another GOP candidate, Rep. Mo Brooks, who might have either beaten Moore or split his voters to allow Strange a path to victory.

So to a large degree, the "mistake" in Alabama that cost Republicans a Senate seat might have been McConnell's.

Alabama is likely to be Republicans' top target in 2020, as Jones is one of only two Democrats up for re-election in a state Trump carried — a much smaller field for Republicans than 2018, when there were ten such Democrats running. There have been rumors that Sessions, who was fired from the Justice Department by Trump last month, might run for his old seat back, but so far he does not sound interested.