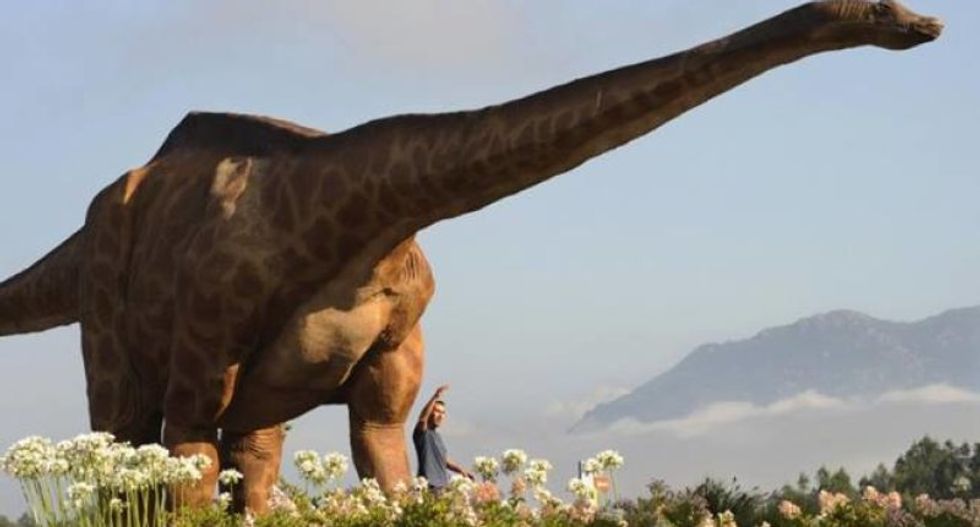 Forensic geologists have revisited the scene of one of the world’s great massacres to identify the means of death. The victims of the Permian era die-off found themselves increasingly in hot water, to die of overheating or suffocation.

That is, in a rapidly warming globe, marine animals simply could not gasp fast enough to take in the increasingly limited dissolved oxygen. So they died in their billions.

It happened at the close of the Permian Era 252 million years ago: the planet’s worst single mass extinction event so far, in which up to 90% of marine species perished and 70% of land animals succumbed.

And if the scientists who have reconstructed this epic event are right, then the prime cause of mass death and destruction was a dramatic rise in atmospheric carbon dioxide which raised tropical ocean temperatures by about 10°C [18 F].

Tropical species could move away from the equatorial zones to find cooler waters and a breathing space. Species adapted to cooler waters had nowhere to go.

“Very few marine organisms stayed in the same habitats they were living in,” said Curtis Deutsch, an oceanographer at the University of Washington. “It was either flee or perish.”

And his co-author and colleague Justin Penn sees a warning for today – in which temperatures have begun to rise in response to profligate combustion of fossil fuels – in a desperate moment long ago. He said:

“Under a business-as-usual emissions scenario, by 2100, warming in the upper ocean will have approached 20% of warming in the late Permian, and by the year 2300 will reach between 35% and 50%. This study highlights the potential for a mass extinction arising from a similar mechanism under anthropogenic climate change.”

This latest study is unlikely to close the case: carbon dioxide build-up in the atmosphere has been proposed before, but other teams have suggested dramatic ozone loss in the upper atmosphere as a prime cause of death. Other candidate killers include increasingly acidic oceans, the mass release of metal and sulphide toxins, or the complete lack of oxygen.

Geologists work on the principle that the present is key to the past: it follows that what happened in the past could also be a guide to what might happen in the future, which is why climate scientists, in particular, attach huge importance to research into ancient atmospheres.

So to build up a picture of what may have happened, Penn and his colleagues report in the journal Science that they matched computer models of animal metabolisms and ocean conditions with the fossil evidence from the boundary of the Permian and Triassic periods. And they claim the first computer-based prediction that could be directly tested against the evidence from the shells and bones of creatures preserved in strata laid down 252 million years ago.

From that, they were able to reconstruct the pattern of obliteration. Massive volcanic lava flows in what is now Siberia deposited colossal volumes of carbon dioxide into the atmosphere. As ocean temperatures rose, the seas began to lose up to 80% of their dissolved oxygen. About half of the deep ocean seafloor became completely anoxic (without oxygen). What is now known as “the Great Dying” began.

The researchers checked their temperature and oxygen readings on what they knew of 61 modern marine species – sharks, crustaceans, corals, molluscs and bony fish – all classes of creature that evolved under conditions similar to the Permian.

Those hit the hardest were the most sensitive to oxygen that lived far from the tropics. Tropical species were already adapted to high temperatures and low oxygen, and had somewhere to move to: they fared better.

It is not at all certain that conditions at the close of the Permian Period provide a parallel to the planet today. Most of the land surface then was one huge supercontinent, there were no mammals, grasses or flowering plants, and the forests – and thus the traffic between atmosphere and life – would have been very different.

“But even if it represents an extreme case, the lesson is clear,” writes Lee Kump, an earth scientist at Penn State University in the U.S., in a commentary in Science.

“Continued or accelerated fossil fuel burning presents a risk that must be reversed or mitigated so that we can avoid a fate anything like the end-Permian.”