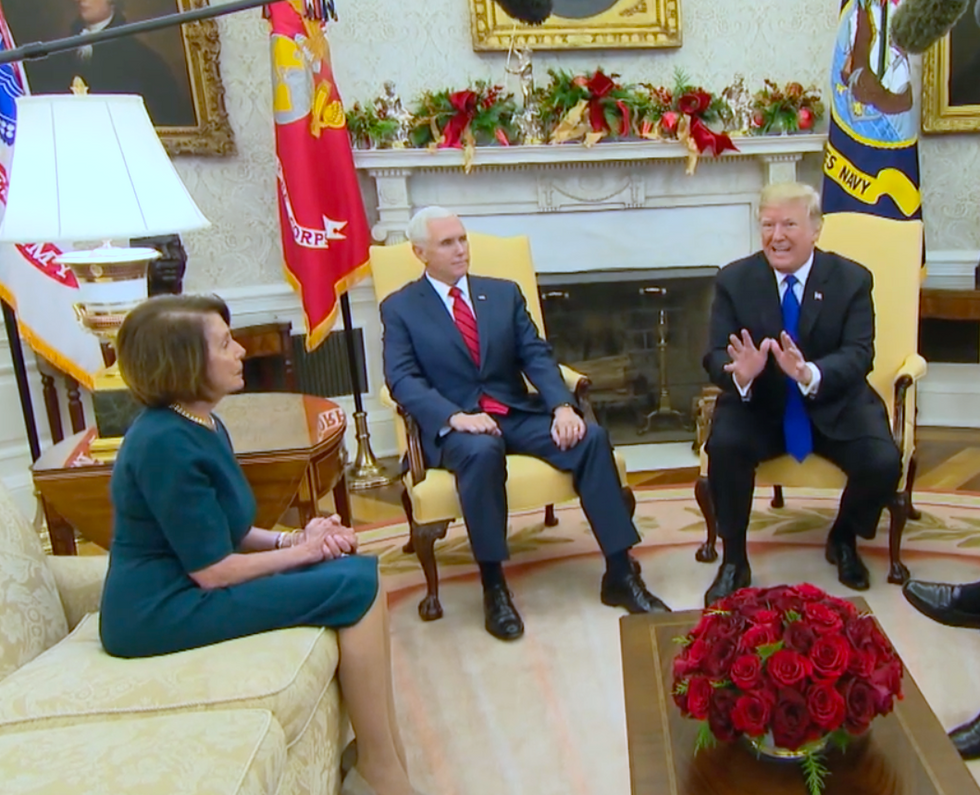 On Tuesday, a televised meeting between President Donald Trump and Democratic congressional leaders Nancy Pelosi (CA) and Chuck Schumer (NY) to negotiate border security and a spending resolution ended horribly for the president.

After the Democrats refused to give him an inch on his cherished pet project of a border wall, and Pelosi referred to the possibility of a "Trump shutdown," Trump lost it and ... agreed with Democrats that he would own any shutdown.

It was a massive, unforced blunder. And, writes conservative columnist Jennifer Rubin in the Washington Post, it means Trump has lost the fight over funding the government before it even begins.

"The first rule of shutdown fights is never say you are for a shutdown," said Rubin. "Voters invariably oppose this kind of stunt and see it as evidence of incompetence and unnecessary rancor by the governing party. In short, since Republicans control everything and are likely to be blamed for shuttering the government, the last thing President Trump wants to do is say he is for a shutdown."

"Ironically, it was Democrats who tried to spare Trump the embarrassment," Rubin added, noting that Pelosi had offered to turn the cameras off and have the discussion in private, and Trump insisted instead on self-destructing out in the open. "It was an extraordinary moment when Trump not only lost the high ground as president but made Democrats look like the grown-ups."

Moreover, Rubin notes, The New York Times has reported that Trump cannot use "the military" to build the wall, as he threatened, because federal law prohibits spending defense money to construct a solid barrier at the border. And in any case, if he could do that (or, you know, make Mexico pay for it), why is he demanding Democrats give him the money in the first place?

"It is not clear how Trump could have appeared more irrational and unhinged," Rubin says.

Trump's tirade, writes Rubin, will throw any attempt by the GOP to whip the votes for a spending bill into chaos. "Hard-liners in the House and Senate will be emboldened by his rant. To keep the government running, GOP leadership may have to turn to Democrats for votes, giving Pelosi and Schumer leverage not only on the border wall but on other spending items as well."

"In some ways, a shutdown at the end of 2018 would put an exclamation point on one of the worst years in memory for Republicans," concludes Rubin. "The president is under investigation in multiple venues. Republicans lost 40 seats and with them the House majority. Indeed that number might be 41 thanks to substantial evidence of election fraud by Republicans in North Carolina's 9th Congressional District. Legislatively, Republicans have accomplished next to nothing this year. If they shut down the government, they'll wind up confirming that the party of Trump is not only unethical but also incompetent and dysfunctional. Christmas sure came early for Democrats."