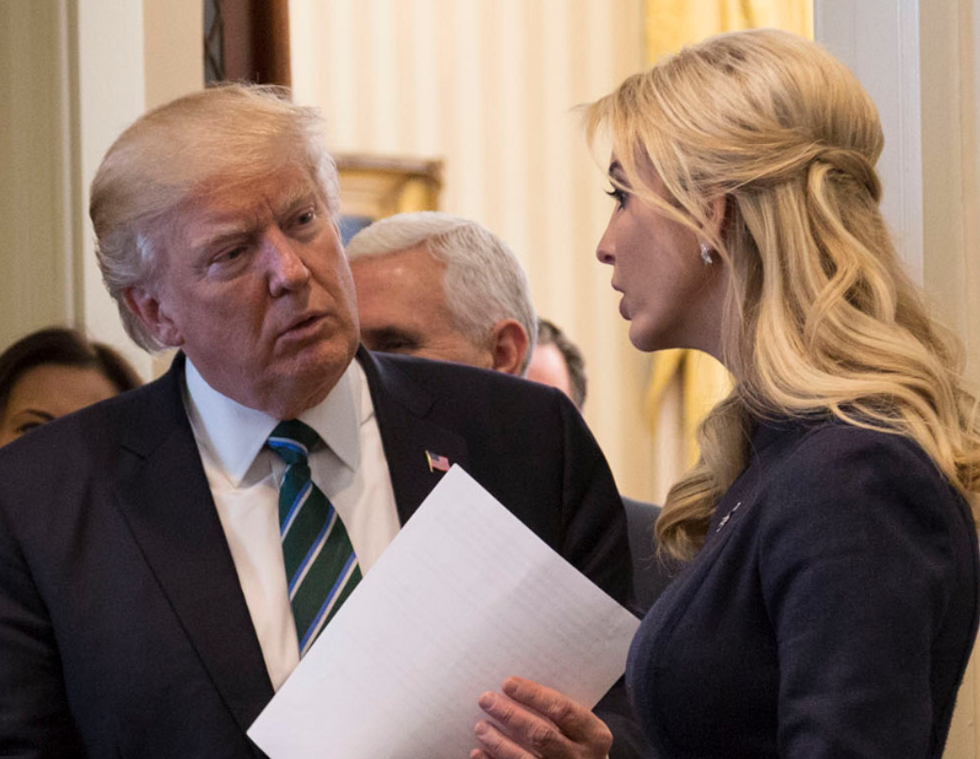 When it came out this year that President Donald Trump’s inaugural committee raised and spent unprecedented amounts, people wondered where all that money went.

It turns out one beneficiary was Trump himself.

The inauguration paid the Trump Organization for rooms, meals and event space at the company’s Washington hotel, according to interviews as well as internal emails and receipts reviewed by WNYC and ProPublica.

During the planning, Ivanka Trump, the president-elect’s eldest daughter and a senior executive with the Trump Organization, was involved in negotiating the price the hotel charged the 58th Presidential Inaugural Committee for venue rentals. A top inaugural planner emailed Ivanka and others at the company to “express my concern” that the hotel was overcharging for its event spaces, worrying of what would happen “when this is audited.”

If the Trump hotel charged more than the going rate for the venues, it could violate tax law. The inaugural committee’s payments to the Trump Organization and Ivanka Trump’s role have not been previously reported or disclosed in public filings.

“The fact that the inaugural committee did business with the Trump Organization raises huge ethical questions about the potential for undue enrichment,” said Marcus Owens, the former head of the division of the Internal Revenue Service that oversees nonprofits.

Inaugural workers had other misgivings. Rick Gates, then the deputy to the chairman of the inaugural, asked some vendors to take payments directly from donors, rather than through the committee, according to two people with direct knowledge. The vendors felt the request was unusual and concerning, according to these people, who spoke on condition of anonymity because they signed confidentiality agreements. It is not clear whether any vendors took him up on his request.

The revelations about the inauguration’s finances show how Trump blurred the lines between his political and business lives, as the real estate mogul ascended to the presidency.

On Thursday, The Wall Street Journal reported that federal prosecutors in New York have opened a criminal investigation into whether the inaugural committee misspent money and whether donors gave in return for political favors, citing people familiar with the matter. In addition, The New York Times reported that prosecutors are examining whether foreigners illegally funnelled money to the inauguration.

Peter Mirijanian, a spokesman for Ivanka Trump’s ethics lawyer, said: “When contacted by someone working on the inauguration, Ms. Trump passed the inquiry on to a hotel official and said only that any resulting discussions should be at a ‘fair market rate.’ Ms. Trump was not involved in any additional discussions.”

Mirijanian did not provide evidence that Ivanka Trump sought a fair market rate.

A spokeswoman for the inaugural committee said it “is not aware of any pending investigations and has not been contacted by any prosecutors. We simply have no evidence the investigation exists.” The White House and a lawyer for Gates did not immediately respond to requests for comment. A spokesman for the Manhattan federal prosecutors’ office declined to comment. The Trump Organization did not comment.

“That doesn’t have anything to do with the president or the first lady,” White House press secretary Sarah Huckabee Sanders told reporters on Thursday night, when asked about the story in the Journal.

President-elect Trump was repeatedly briefed on inaugural planning and specific events, according to one committee worker with direct knowledge. WNYC and ProPublica have seen presentations that were shown to the president-elect, complete with renderings and floor plans.

Trump’s 2017 inauguration committee, which was chaired by his friend the businessman Tom Barrack, raised nearly $107 million from donors including the casino magnate Sheldon Adelson and AT&T. The January 2017 festivities cost almost twice President Obama’s 2009 inauguration, previously the most expensive. The nonprofit that planned Trump’s inauguration booked many spaces in the Trump International Hotel, located in the Old Post Office building near the White House, including a ballroom, hotel rooms and work spaces, as well as paying for meals there, according to several people who worked on the inauguration.

How the inaugural committee managed to spend all the money it raised remains a mystery, nearly two years after the event. While groups that support political candidates or issues must publicly detail their spending, an inaugural committee is required to list only its top five contractors. That leaves about $40 million unaccounted for.

Greg Jenkins, who led George W. Bush’s second inauguration, was perplexed by the Trump team’s mammoth fundraising haul. “They had a third of the staff and a quarter of the events and they raise at least twice as much as we did,” Jenkins told WNYC and ProPublica this year. “So there’s the obvious question: Where did it go? I don’t know.”

As planning for the inauguration was underway in December 2016, Ivanka Trump was still an executive vice president at the Trump Organization. But she was reportedly preparing to move to Washington and take on a greater public role. She now serves as an adviser to the president.

Around the middle of the month, with Inauguration Day scarcely a month away, Ivanka Trump was asked to help resolve a dispute between inaugural planners and her family’s Washington hotel, according to emails.

The problem: Organizers thought the hotel was charging too much money.

Emails show that Ivanka Trump connected Gates with Mickael Damelincourt, managing director of the hotel. Damelincourt responded with a new rate of $175,000 per day for use of the Presidential Ballroom and meeting rooms, offering a $700,000 charge for four days of use.

It is not clear what the earlier price was, but Damelincourt’s revised rate did not satisfy one of the lead organizers of the inauguration, Stephanie Winston Wolkoff.

In an email to Ivanka Trump and Gates, Wolkoff, who had previously managed the Metropolitan Museum’s annual gala and fashion shows at Lincoln Center, expressed discomfort with the price.

“I wanted to follow up on our conversation and express my concern,” Wolkoff wrote in the December email.

“These events are in PE’s [the president-elect’s] honor at his hotel and one of them is for family and close friends. Please take into consideration that when this is audited it will become public knowledge,” she wrote, noting that other locations would be provided to the inaugural committee for free.

“I understand that compared to the original pricing this is great but we should look at the whole context,” Wolkoff wrote, suggesting a day rate of $85,000, less than half of the Trump hotel’s offer.

Wolkoff, who is a friend of first lady Melania Trump, did not respond to a request for comment. Wolkoff’s firm, WIS Media Partners, was the inauguration’s highest-paid contactor, according to the committee’s tax filing. Wolkoff was scrutinized in media accounts this year because the firm received nearly $26 million. Most of that of the money was passed on to subcontractors, according to a person familiar with the spending. It is possible that payments to the Trump hotel were included in that sum.

If the Trump hotel charged the inaugural committee above-market rates, it could violate tax rules, according to Owens, the nonprofit tax expert who is now a partner at the law firm Loeb & Loeb.

If a person with “substantial influence” over a nonprofit group charges the group above-market rates in a transaction with their outside business, the IRS can impose steep fines. In this case, Donald Trump could qualify as a person with such influence. Should the tax agency find that a violation occurred, the Trump Organization would have to refund any overcharge and the inaugural committee would be hit with a 25 percent tax on the money, Owens said.

Owens added that IRS audits of nonprofits are increasingly rare. Since the inaugural committee was incorporated in Virginia, the state attorney general there could also have standing to investigate its operations.

A spokeswoman for the inaugural committee said its finances “were fully audited internally and independently and are fully accounted. … These were funds raised from private individuals and were then spent in accordance with the law and the expectations of the donors.”

The inaugural committee spent money at the Trump International in Washington in other ways as well. Many workers came from California and New York and stayed at the hotel, eating their meals there and holding meetings. Receipts reviewed by WNYC and ProPublica show they typically paid about $350 a night. According to an inaugural worker, 15 to 20 inaugural workers stayed at the hotel most nights for roughly a month in the run-up to the inauguration, at a total cost of what could be more than $200,000.

The professional resumes of top Trump hotel staffers indicate they worked closely with the presidential inaugural committee. The hotel’s director of food and beverage says on his LinkedIn profile that he was “working with PIC [Presidential Inaugural Committee] during the 2017 Inauguration” and a “related series of very special events.”

The day before Trump’s swearing in, the inaugural committee hosted a Leadership Luncheon in the hotel’s Presidential Ballroom, featuring his cabinet nominees and major donors. “This is a gorgeous room,” the president-elect told the crowd. “A total genius must have built this place.” And the night of the inauguration itself, Trump’sfamily and close allies such as Sean Hannity celebrated into the early morning at an exclusive after-party in the Trump hotel’s grand lobby. Thousands of red, white and blue balloons were released from the rafters.

Some vendors for the inauguration became concerned when Gates, a top inaugural committee official, asked them to take payments outside of the normal committee invoicing process, according to two people with knowledge of what happened. He proposed that they be paid for their work directly from a would-be donor rather than by the committee. Gates told the vendors that the inaugural committee had received pledges of more money than was initially targeted, and, therefore, he wished to reduce the publicly reported sum raised.

Gates did not respond to a request for comment. Last February, he pleaded guilty to unrelated charges of lying to the FBI and conspiracy, as part of special counsel Robert Mueller’s inquiry.

Over the summer, Gates was cross examined about his work for the inauguration in the trial of his former boss, Paul Manafort. Gates conceded that he might have charged personal expenses to the committee. “It’s possible,” he said.

In a separate episode this year, a U.S. lobbyist pleaded guilty to helping a Ukrainian businessman and member of Parliament buy tickets to the inauguration, in violation of rules barring the committee from taking foreign money. The inaugural committee was not accused of wrongdoing in that case.