'It was glorious': Internet cheers Pelosi and Schumer for standing their ground against Trump's 'petulant tantrum' 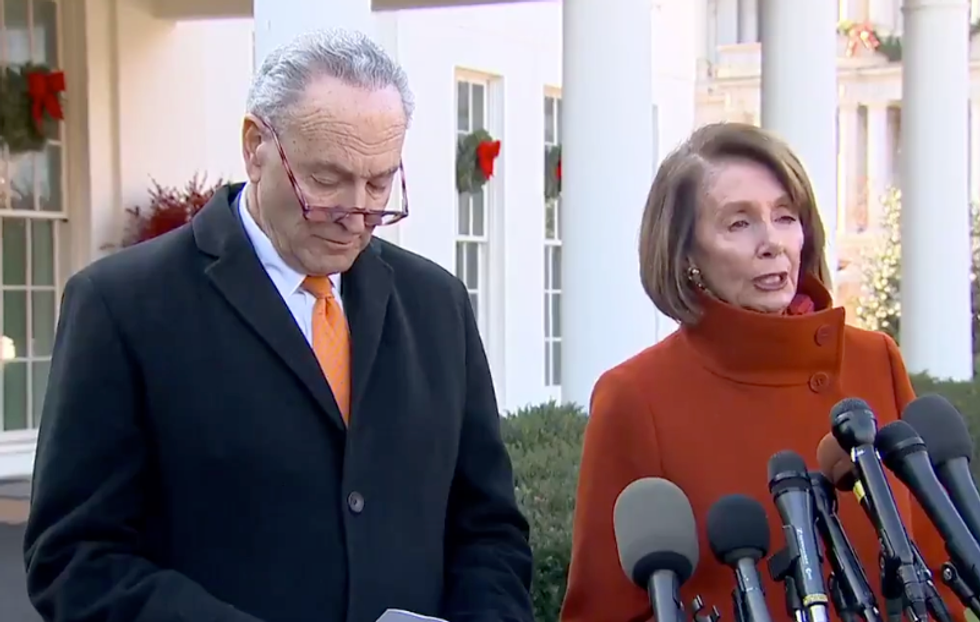 The incoming House Speaker and the Senate Minority leader met Tuesday with Trump and Vice President Mike Pence, and the pair of Democratic lawmakers blasted the president for threatening a government shutdown over his proposed border wall.

“If I needed the votes for the wall in the House, I would have them in one session — it would be done,” Trump said.

“So go do it,” Pelosi responded.

By the end of the meeting, Schumer had baited the president into bragging: “I am proud to shut down the government for border security.”

Trump has been able to hide how deeply stupid and bad at politics he is, because for 2 years he hasn't had to deal… https://t.co/n0OMeFgOwV
— Ken Tremendous (@Ken Tremendous)1544549076.0

Trump has no idea what he’s in for the next two years and how different things are about to be for him. https://t.co/agZgkIWUBI
— Matthew Miller (@Matthew Miller)1544548564.0

THE PRESIDENT has just robbed Republicans of the ability to say Democrats are shutting down government. This is g… https://t.co/8IGb82LP7z
— Jake Sherman (@Jake Sherman)1544547942.0

Two adults dealing with a petulant, unbriefed, unprepared tantrum. White House corroding so much of the gravity and… https://t.co/bj9RVKepCD
— Tom Nichols (@Tom Nichols)1544549553.0

Schumer says The Post gave Trump a bunch of pinocchios on claims that the wall is being built. Trump sits on it for… https://t.co/QgHmxLuhJ6
— Philip Bump (@Philip Bump)1544549832.0

Nancy Pelosi just did something that not a single Republican has had the guts to do in 2 years. Stand up to Trump… https://t.co/LiQkZ7XwEZ
— Judd Legum (@Judd Legum)1544549938.0