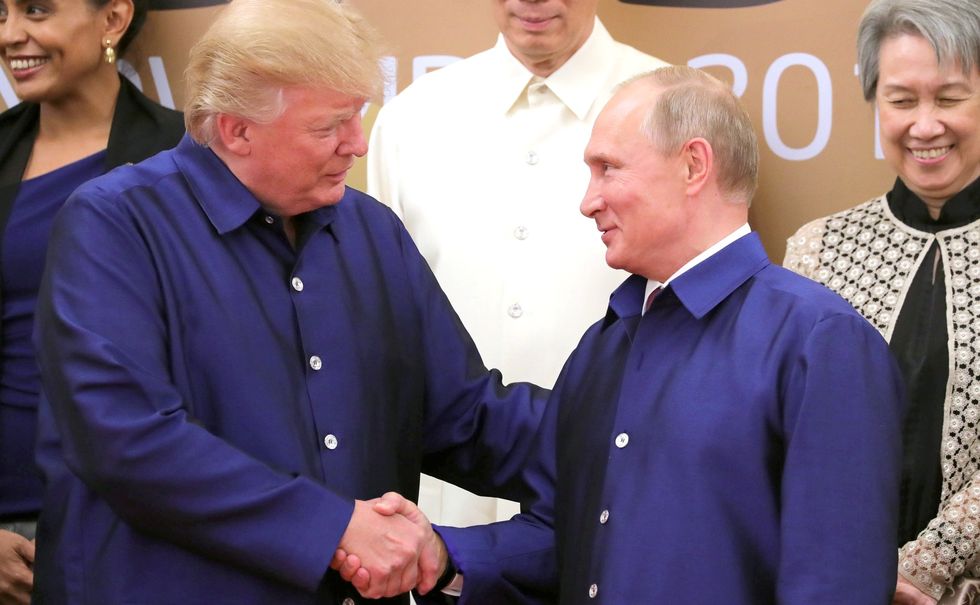 Weirdly, it kind of makes sense that Donald Trump's supporters on Fox News and elsewhere are brushing off last week’s revelations about the Trump Tower Moscow deal as a “nothingburger.”

This knee-jerk reaction makes sense because Trump loyalists clearly haven’t been following the ongoing reporting on this story, even though Rupert Murdoch’s own paper, the Wall Street Journal, has been one of many top-shelf publications covering the Trump-Russia saga in granular detail. Simply put: The Red Hats are just now catching up to speed with a story that’s been years in the making. So perhaps their nothingburger meme is just a reflection of being slow on the uptake.

OK, that’s admittedly a generous analysis of what we’re hearing from Trump’s loyalists, especially after it became clear that Trump and his company were engaged in a colossal real estate deal to build what literally would’ve been the tallest building in Russia, with Vladimir Putin as a principal, and that this was negotiated during the same period of time when Putin was engaged in a pervasive military intelligence cyberattack against the United States, with the explicit intention of helping Trump become president.

The most realistic analysis is that Trumpers are being deliberately ignorant about a vast series of crimes with our current president at the center of a nefarious confederacy that could easily be defined as the Trump crime family. This is absolutely a somethingburger, stacked high with all the fixin’s -- and we haven’t really seen the lion's share of the details yet.

Trump supporters have been belittling the news as just another real estate deal by a real estate mogul: Nothing to see here, they say. This would be not unlike calling the U.S. Civil War just another case of “regional tensions.” They fail to grasp that the president repeatedly lied about his ties to Russia, and that he was doing so because he was obviously trying to keep this deal from being revealed to his Republican voters during the Republican primary season in 2015 and 2016.

Even a cursory glance at the record of denials shows that Trump and his surrogates vehemently rebuffed any and all suggestions about business with Russia, as well as earlier reports about Trump Tower Moscow -- now known as the “Moscow Project” -- before it was finally tossed to the back burner in June of 2016 (as far as we know). Anyone existing in the real world can see how the deal and its secrecy, then and now, exposed Trump to potential blackmail by the Russian government, which itself faced a series of economically crippling sanctions by the U.S. and our allies. Consequently, Trump was and is beholden to Putin, with the Moscow Project as at least one of the Russian anvils dangling over the president’s head. And we still don’t know whether the Moscow Project is set to be reanimated after Trump finally leaves office. It could be that Trump is carrying a torch for the project until all this blows over.

But it wasn’t just the overall hush-hush nature of the Moscow Project that poses such a threat to American national security. The true smoking gun at the center of the Trump Tower Moscow prong of the Russia story happens to be a Russian bank known as VTB. Those who haven’t been following the day-to-day developments (hello, Red Hats) might not know that 60 percent of VTB is controlled by the Kremlin.

It turns out that one of Trump’s many shady operatives and hangers-on, Felix Sater, a Russian-born New Yorker with an office in Trump Tower, arranged financing for the Moscow Project. The money was to be put up by VTB, and Trump himself signed a letter of intent to build the skyscraper, complete with a spa facility for Ivanka Trump’s brand and a $50 million penthouse for Putin (priorities, priorities).

VTB’s financing appears to have been locked in around October 2015, while Russia’s military intelligence agency, the GRU, was busily deploying its attack against the Democrats and the forthcoming American elections.

What the nothingburger crowd won’t say out loud is that VTB has been subject to American sanctions since July 2014, after Putin invaded Ukraine and seized Crimea in the wake of the Sochi Olympics. Simply put, it’s illegal for any Americans or American corporations, including the Trump Organization, to do business with VTB and other entities under sanction. Trump, Cohen and Sater did it anyway.

No wonder Trump and his people wanted to keep the deal secret. Sanctions were potentially violated, and Putin appears to have been bribed with a $50 million apartment. If that’s a nothingburger, I’d hate to see what an actual burger looks like.

This whole arrangement is amplified by the fact that Trump inexplicably admitted last week that the Moscow Project was a real thing, while also not denying any of the related details. To repeat: Trump confessed to the existence of the deal. The Moscow Project, therefore, isn’t “fake news.” The president has confirmed it.

By way of context, couple Trump’s remarkable confession with the rest of Trump’s links to Russia including financing for various Trump projects; campaign personnel links to Putin and other Russia oligarchs -- specifically, convicted hired goons like Paul Manafort and Michael Flynn; alleged links between Russian cash and the Trump Soho property; Trump’s direct link to oligarch Dmitry Rybolovlev, who purchased a moldy Trump property in Palm Beach at a significant markup; and so on -- all of which render Trump’s repeated denials intensely laughable. We can expect to hear many more details from Robert Mueller once all this reaches a public conclusion.

Trump is publicly altering American foreign policy toward Russia in order to suit his own financial best interests. But it could be far worse than that. Trump could also be ensnared by Russian kompromat, forcing him to enact policies favorable to Putin and Putin alone (the lifting of sanctions and the penalties in the Magnitsky Act, primarily). Anyone beating the nothingburger meme to death right now isn’t seeing the harrowing big picture -- the criminal and national security ramifications of Trump’s ill-advised alliance with a nation whose government is run by thugs, assassins and thieves. If you’re still unconvinced, go ahead and replace every instance of “Trump” in this article with “Obama” and then tell us again how it’s all a big nothingburger.