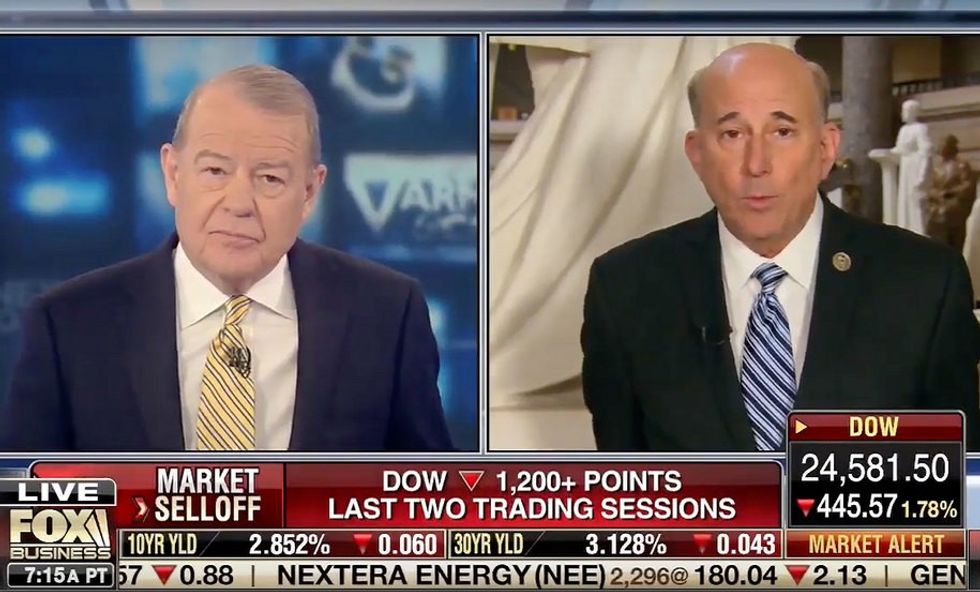 Fox Business’s Stuart Varney, a man that somehow makes Piers Morgan sound less smarmy, had wildly dumb Texas Rep. Louie Gohmert on his show Thursday morning. Varney was hosting a segment about how the tech giant Google has been willing to be complicit in the Chinese government’s censorship of the internet in order to penetrate the Chinese marketplace. Attacking Google for its complete lack of ethics is totally warranted, but of course the reason that Fox News is attacking Google is in order to build the vilification of China, justifying Trump’s incoherent trade while attacking a company perceived as being “liberal.” Rep. Louie Gohmert is sort of like having a drug-fueled 1970s rock-and-roll legend on your show—sure they’re narcissistic and terribly erratic asshats, but they will likely make for some entertaining television.

Gohmert makes a clearly well-worn and on-brand right-wing conspiracy joke about George Orwell. He then explains how Google has “literally sold their souls” to China. Classic rock god antics! Literally! Of course, the problem with putting an erratic and unsophisticated mind and mouth in front of a microphone is that, so very frequently, they veer off into truly insane (and thinly-veiled) anti-Semitic conspiracy theory.

In a truly tortured segue, Gohmert connected George Orwell to another George—Soros. Get it?

Gohmert: You mention Orwell, it reminds me of another George, ah George Soros. Because Google is born in a free country and they go over and oppress others, help oppress others in another country. George Soros is supposed to be Jewish but you wouldn't know it from the damage he inflicted on Israel and the fact that he turned on fellow Jews & helped take the property that they owned.

Varney quickly moved on, probably afraid that Gohmert would pull out his Glenn Beck blackboard to begin drawing lines between Hitler, the Rothschilds, George Soros, and black ops helicopters. If Louie Gohmert has a “brand,” it’s called “Batshit Crazy.” But the awfulness of the claim, so grotesquely wedged into a conversation about China, clearly stuck in someone’s craw at Fox Business, and according to the Daily Beast, Varney made an on-air apology later in the segment.

In the following broadcast hour, Varney issued an on-air apology for Gohmert’s remarks: “Congressman Louie Gohmert, for some reason went out of his way to bring up George Soros and made unsubstantiated and false allegations against him. I want to make clear those views are not shared by me, this program or anyone at Fox Business.”

This isn’t the first, second, or last time he’s publicly promoted the abhorrent George Soros as a Nazi collaborator meme. But here’s a quick primer on George Soros:

When World War II began, and Jews were swept up into camps, with more than 6 million ending up systematically murdered by the Third Reich. George Soros was 9-year-old Jew living in Hungary with his family when the war began. Soros was 14 years old when the Nazis occupied Hungary, and his family forged false identification papers and split up, in order to escape being sent to a Nazi concentration camp. Soros and his father forged similar papers for other Hungarian Jews during that time, before leaving the country and relocating in England.

The erroneous meme about Soros that has taken off in right wing circles originated with Glenn Beck—back when he was the heinous Glenn Beck we all remember. An old 60 Minutes interview with Soros shows him explaining how, at 14—charged with pretending he was the Christian child of an Hungarian officer—he had to watch as Hungarian and Nazi officials stole away the property of Jewish citizens who had been sent to their likely deaths in concentration camps.

None of us can know how we would have responded under the kinds of circumstances people like George Soros were put in as children—and adults—during World War II. But I will bet you another blue wave in 2020 that at 14, Louie Gohmert would have sold his family to the devil to keep his hair.