Can a physics of panic explain the motions of the crowd? 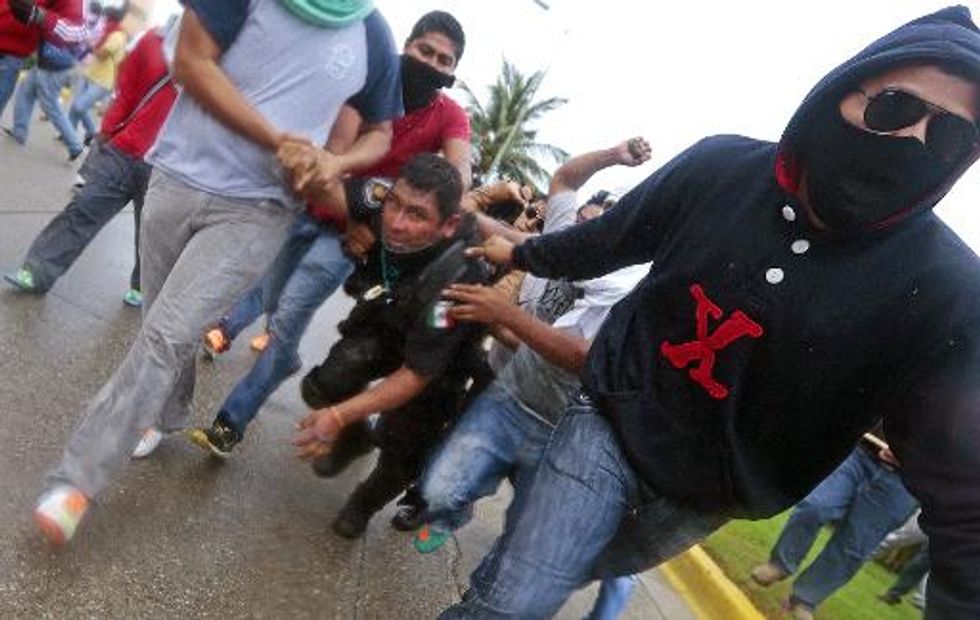 When people come together in a crowd, physical and emotional connections define their movement, state of mind and will to act. Understanding crowds can help us manage the panic caused by a terrorist attack; a science of crowds is vital to managing many emergencies, especially when density becomes dangerously high. Panic or chaos in a crowd can kill or injure hundreds, as happened at the Love Parade in Germany in 2010 when thousands of attendees to an electronic dance music festival piled up as they tried to enter a narrow tunnel; 21 people died of suffocation.

Fundamental science and public safety demand that we develop a complete science of crowds using a range of disciplines. Today, work by social psychologists shows that crowds are influenced by the personalities of individual members; thus, crowds can embody altruistic and helpful behaviour as well as the opposite. And now we can extend crowd science further by incorporating quantitative analysis using classical and statistical physics, computational science and the theory of complex systems – the study of groups of interacting entities.

One relevant concept from complexity theory is ‘emergence’, which occurs when the interactions among the entities produce group behaviour that could not have been predicted from the properties of any individual element. For instance, randomly moving H2O molecules in liquid water suddenly link up at zero degrees Celsius to make solid ice; starlings in flight quickly form themselves into an ordered flock.

Emergent behaviour can be predicted if the interaction among the entities is known, as shown in 2014 by researchers at the University of Minnesota who determined how two people in motion interact and, from that, how a crowd moves. The researchers first considered an idea from physics, theorising that, like electrons, pedestrians avoid collision by repelling each other as they get closer. But video databases showed instead that when people see that they are about to collide, they change their paths. From this, the researchers derived an equation for what amounts to a universal force of repulsion between two people, based on time until collision, not distance.

The formula successfully reproduced the emergent real-world features of a crowd, such as forming a semicircular configuration while waiting to trickle through a narrow passage, or extemporaneously developing independent lanes as its members walk toward different exits. This makes it possible to simulate crowd behaviour to design evacuation routes, for instance.

To be useful in emergencies, crowd analysis must also account for emotional contagion. Spreading fear can change emergent behaviour, as shown by researchers at the K N Toosi University of Technology in Iran. In 2015, they created a computer version of a public space populated with hundreds of simulated adults and children, and security guards who directed people to the exits. Assuming that the participants were responding to a dangerous event, the simulation escalated them to greater levels of fear and panicked, random movement when they failed to find an exit.

Running the simulation, the researchers found that between 18 and 99 per cent could escape, depending on the combination of participants. The greatest number of escapes did not occur with the smallest or largest numbers of people or security agents but at intermediate values. This shows that the emotional state of a crowd can carry its dynamics into a complicated nonlinear stage.

We can determine the emotion of individuals in a real crowd by observing their physical behaviour. In 2018, a team under Hui Yu of the University of Portsmouth in the UK used kinetic energy, the energy of motion in physics, to serve as a gauge that could establish when a crowd enters an ‘abnormal’ emotional state. Crowd members running from a dangerous event such as an explosion have increased kinetic energy, which can be detected in real-time crowd video images. Using computer vision techniques, the researchers calculated the speeds of the pixels that make up the images, from which they identified the most energetic part of the crowd.

The researchers applied their method to the dataset of video clips collated by the computer scientist Nikolaos Papanikolopoulos and colleagues at the University of Minnesota. Those clips show crowds of real people reacting to simulated emergencies. Initially, the subjects walk normally, then suddenly disperse and run in all directions. The energy algorithm quickly sensed these transitions, and the researchers conclude that the method can automatically detect unusual, potentially dangerous behaviour in public gatherings.

Other links between emotions and actions have been drawn by the computer scientist Dinesh Manocha at the University of Maryland and his colleagues in their ‘CubeP’ model, which unites analysis of factors from physics, physiology and psychology. These three factors are strongly interrelated during the physical activity and emotional responses that mark a crowd in crisis. CubeP uses the basic physics of forces and velocities to calculate the bodily effort of a person in motion. CubeP also incorporates the model of emotional contagion developed in 2015 by the computer engineer Funda Durupinar at Bilkent University in Turkey and her colleagues, which includes typical personality profiles that determine a person’s response to stress. CubeP adds a physiological measure of the panic level for each person, based on bodily effort. This affects heart rate, which is known to indicate the degree of fear. All this is combined to predict the speed and direction of motion for each crowd member.

The researchers tested CubeP in computer simulations of a crowd reacting to a dangerous event, with realistic results. A virtual person near the threat quickly panics and runs. A more distant individual responds to emotional contagion with fear and escape behaviour, though later. The researchers also applied CubeP to the University of Minnesota dataset and to videos of real emergencies, such as on the Shanghai subway system in 2014, and outside the British Parliament building in 2017. In all these, CubeP simulations of crowd behaviour were reasonably close to reality, and closer than the Durupinar approach and other models that do not merge physical, psychological and physiological factors.

This improvement illustrates the power of a multidisciplinary science of crowds. As the insights accumulate, they are sure to be useful in architectural design and disaster planning. Findings could, however, lead to more surveillance of crowds in public spaces, a phenomenon currently raising concerns from the American Civil Liberties Union about privacy and potential for abuse.

Something is lost and something gained by reducing crowd behaviour to numbers. Comparing models to real data will provide welcome insights into crowd dynamics, but we need a sweeping understanding from psychology as well. Elias Canetti, the Nobel prizewinning author who wrote the classic Crowds and Power (1960), foresaw the day when this partnership would help to break the crowd code. In considering the importance of a certain critical density in crowd behaviour, he wrote: ‘One day it may be possible to determine this density more accurately and even to measure it.’ Now we can measure and analyse such quantities, but we also need the expansive views of the humanities and social sciences to tell us what they really mean.