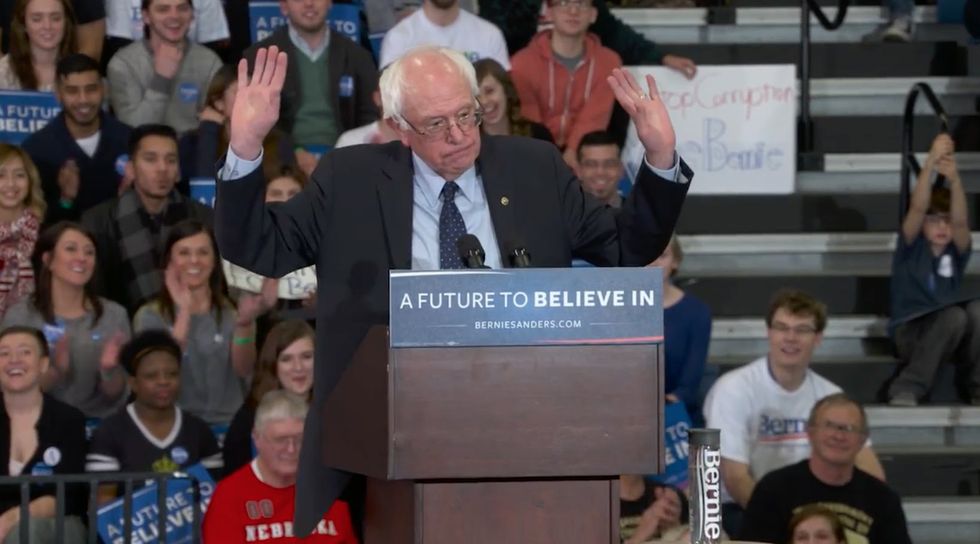 And in a new interview on "The View," Love, the daughter of Haitian-American immigrants, argued that this somehow proves Democrats are racist. Why? Because they ran a candidate against her and won.

"We're not going to let Democrats off the hook, because I was actually targeted by Democrats," said Love. "They targeted me because I am a black female Republican. And they replaced me with a middle-aged white male in the state of Utah."

OMG she is saying that the Democrats are the *real* racists because they tried to get rid of all the diversity in t… https://t.co/O1hbFzOyK1
— chris evans (@chris evans)1544205010.0

It should go without saying that targeting a Republican House seat is not racism — it's democracy. Rather than focus on how she lost to a Democrat, Love might want to consider encouraging her party to run more people of color, and ask herself why Trump's base seems so uninterested in doing so.

On the flip side of that issue, this week, Fox News talk show host Tucker Carlson went full white nationalist during a segment on immigration.

Tucker complained in an argument with former Democratic National Committee communications director Luis Miranda that it was a national crisis that birth rates were falling in America, and that immigrants are going to step in and "replace you."

Tucker: Birth rates are falling and immigrants are "going to replace you" "I just am for Americans and nobody care… https://t.co/x6JfTlLv9u
— Madeline Peltz (@Madeline Peltz)1543972882.0

This talking point will be familiar to anyone who has followed the rhetoric of white nationalists, who are obsessed with the idea of other people coming in and "replacing" the white population. This was most visible during last year's violent chaos in Charlottesville, where Tiki Torch bearing neo-Nazis marched and chanted "Jews will not replace us!"

The fact that Fox News continues to employ someone who is making white nationalism accessible to a mainstream audience is deeply disturbing.

This week, one such attack came from Rep. Louie Gohmert (R-TX), and host Stuart Varney was apparently so caught off-guard by Gohmert's casual hate speech that he simply tried to move on:

Gohmert is referring to a frequently-debunked lie that Soros helped the Nazis confiscate Jewish property — which is not only false, it is a despicable claim to make against a Holocaust survivor. Sadly, various members of the right, including Donald Trump Jr., have been circulating this claim for a while, hoping to make it stick by repetition.

The absentee ballot election fraud scandal in North Carolina's 9th Congressional District continues to grow, and it is now all but certain that GOP candidate Mark Harris and his strategist Leslie McCrae Dowless, Jr. sent ballot harvesters to steal hundreds of absentee ballots from elderly black voters in Bladen and Robeson Counties.

But according to former GOP Gov. Pat McCrory, the solution is simple: make it harder to vote!

McCrory previously signed a sweeping voter ID bill in 2013 that was later found to have targeted African-Americans "with almost surgical precision" by a federal court. That bill actually made it easier to vote by absentee ballot, possibly due to the fact that Republican voters have traditionally liked to vote absentee.

Regardless, McCrory's suggestion that North Carolina should punish voters for fraud that was committed against them by a candidate is irresponsible and cruel. The answer to voters having their votes stolen from them is not to then make it even harder for those people to vote in the first place.

The news that special counsel Robert Mueller has gained "substantial assistance" from former National Security Adviser Michael Flynn in the Russia investigation is a big development.

But a singer from the "Deplorable Choir" did not think it was all that amusing. She took to Twitter to shout at liberals in a bizarre, poorly-edited two-minute rant in which she proclaimed Flynn a "hero," warned the "liberal losers at CNN" that they are "on a sinking ship" with the rest of the "Deep State," and told everyone to donate to Flynn's legal defense fund:

"The Deplorable Choir" is a bizarre Twitter account in which young women in Trump hats sing bizarre songs attacking liberals and praising Trump's greatness, even dedicating one prop-comedy-filled song to the border wall. It is such a strange group that people debate whether they are legit or just very sophisticated satire.

In any event, as more revelations come from the Mueller investigation, Trump's right-wing supporters are likely to come apart even further.