'The Worst Attorney General in Modern History': Jeff Sessions' Last Act at the DOJ Solidified His Devotion to Racist Policies 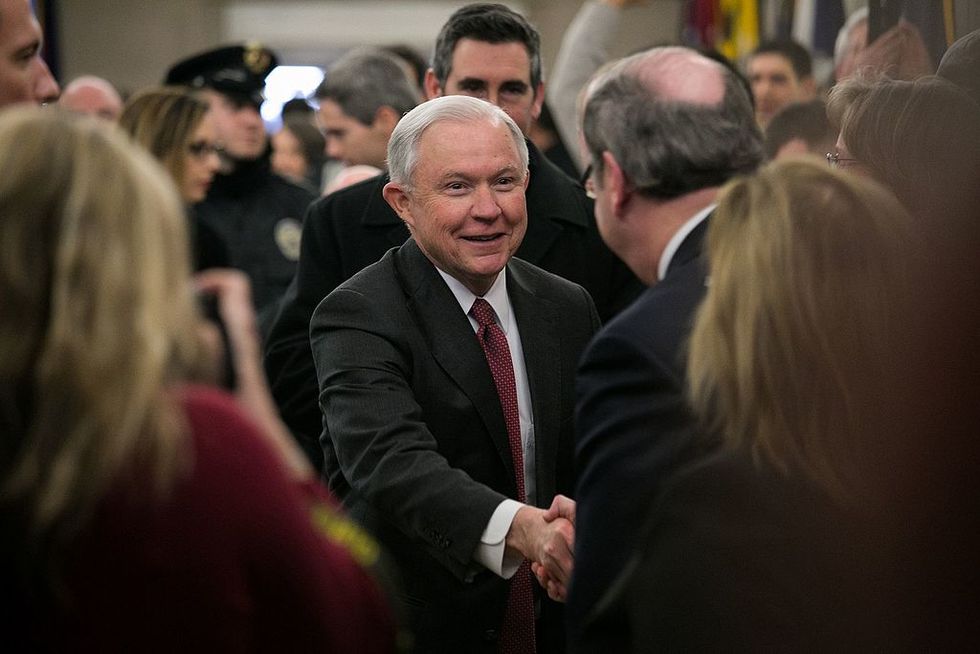 In his last "evil" act as head of the Justice Department under President Donald Trump, Jeff Sessions reminded "everyone yet again why he's been the worst attorney general in modern history" and drastically limited the ability of federal officials to use court-enforced deals to require reforms at police departments that are found systematically violating people's civil rights.

Sessions, on his way out the door, reminds everyone yet again why he’s been the worst attorney general in modern hi… https://t.co/YGUIkiBgTm
— Trevor Timm (@Trevor Timm) 1541734305.0

Shortly before Trump forced Sessions to resign on Wednesday—and appointed a temporary replacement who is hostile toward Special Counsel Robert Mueller's investigation—Sessions signed a memorandum (pdf), as the New York Times reports, "sharply curtailing the use of so-called consent decrees, court-approved deals between the Justice Department and local governments that create a road map of changes for law enforcement and other institutions," by imposing "three stringent requirements for the agreements."

The decrees were, as the Times noted, "used aggressively by Obama-era Justice Department officials to fight police abuses," but soon after Sessions took office, he had signaled he would scale back their use and "ordered a review of the existing agreements, including with police departments in Baltimore, Chicago, and Ferguson, Mo., enacted amid a national outcry over the deaths of black men at the hands of officers."

Sessions' last-minute final act was met with widespread outrage, but not surprise—rather, as many critics quickly pointed out, it fit with the patterns of Sessions' moves throughout his tenure as attorney general.

"From day one, former Attorney General Jeff Sessions expressed open and naked hostility to the use of consent decrees, especially in the civil rights context," said Kristen Clarke of the Lawyers' Committee for Civil Rights Under Law. "This action by Sessions, on his way out the door, seals his legacy as an obstructionist when it comes to advancing justice and protecting rights in our country."

"I would never expect Sessions to be anything other than an unrepentant civil rights foe until the very last minute," tweeted Sherrilyn Ifill, president and director-counsel of the NAACP Legal Defense Fund.

"He was a racist when appointed, a racist while serving, and a racist to the very end," Josh Moon of the Alabama Reporter said of his state's former senator. "There is no redeeming quality to Jeff Sessions. He's a horrible racist at his core."

The New Republic's Matt Ford concluded simply, "He is who we thought he was."

Although Sessions, much to Trump's frustration, recused himself from the Mueller probe, while serving as attorney general, he made several moves—including canceling Deferred Action for Childhood Arrivals (DACA) and implementing the "zero-tolerance" policy that tore migrant children away from their parents—that had civil and human rights advocates constantly raising alarm about "the Trump/Sessions white supremacist agenda."

Even before news broke about his memo to curb the use of consent decrees, social justice advocates began to document Sessions' record as he departed.

"Jeff Sessions was the worst attorney general in modern American history. Period," the ACLU charged in a series of tweets on Wednesday that, among other things, noted his discrimination against trans people, enthusiastic enforcement of racist drug laws, and use of religion to attack women's reproductive rights.

Sessions allowed the DOJ to function as the political arm of the Trump administration to undo fundamental rights, d… https://t.co/YEnQqPzeEL
— ACLU (@ACLU) 1541621746.0

One of the most prominent parts of Sessions' legacy is the immigration crisis he leaves behind, as Julia Preston outlined for The Marshall Project on Wednesday. Acknowledging Preston's report, the Lawyers' Committee for Civil Rights Under Law summarized on Twitter, "On President Trump's favorite issue, the departing attorney general leaves behind record-breaking backlogs of cases, onerous constraints on judges, and a bulwark of punitive attitudes toward families seeking asylum."