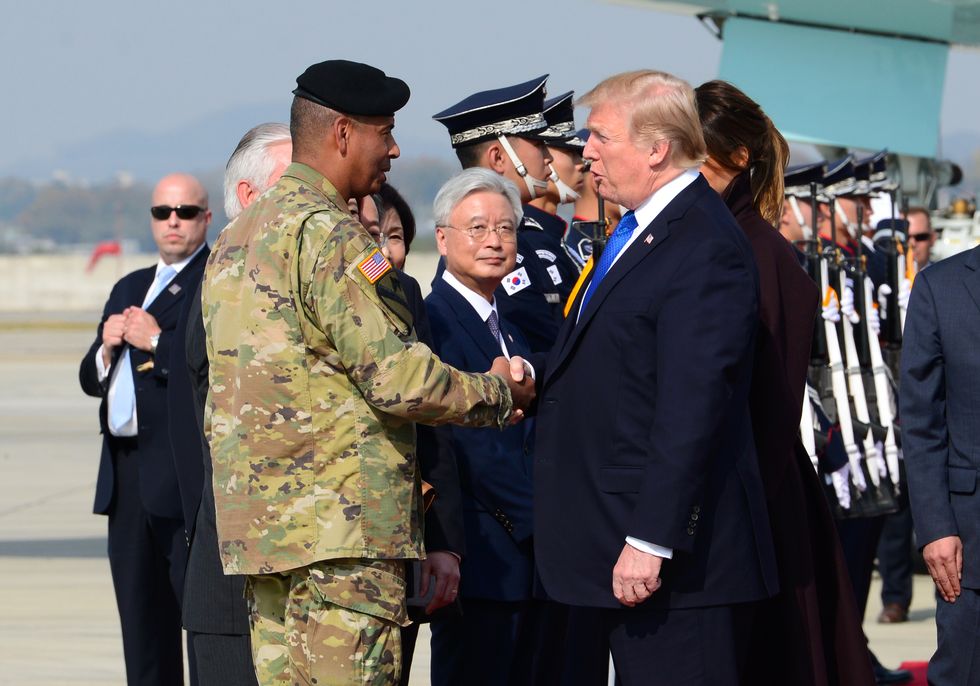 President Donald J. Trump greets U.S. Army General Vincent Brooks, United States Forces of Korea commander, after landing at Osan Air Base, Republic of Korea, Nov 7, as part of his 13-day trip through the Pacific Theater. President Trump traveled from Osan to Camp Humphreys to speak with service members. Afterward, he is expected to speak with key military leaders of the region on strengthening the international resolve to confront the North Korean threat and ensure the denuclearization of the Korean Peninsula. (U.S. Air Force photo by Staff Sgt. Alex Echols III/Released)
Cody Fenwick
and
AlterNet
November 02, 2018 Human Rights

President Donald Trump is already breaching the bounds of central norms surrounding the U.S. military by sending in troops to the Mexican border in the run-up to the midterm elections, despite no evident need — and for obvious political reasons.

Trump has been continuously tried to turn a Central American caravan of migrants into a major political issue, despite the fact that they're about 1,000 miles away from the United States and pose no danger to the country. Using the military to raise the stakes at the border is a clear play to stoke his base ahead of the midterms.

But on Thursday, during a speech that was ostensibly about asylum policy, Trump showed even more disdain for American norms and laws by describing what was essentially an unlawful order.

In other words, Trump was saying the U.S. military should shoot the immigrants first if they tried to throw rocks. But as numerous observers explained, this was a patently unlawful direction.

This means that, even if soldiers took Trump's words to be an order, they would be obligated to disobey it.

"[There] is no leader in the military - Officer or NCO - who would allow a soldier to shoot at an individual throwing a rock," said Mark Hertling, a veteran and CNN national security analyst. "They know that violates the rules of engagement, the law of land warfare & the values those in the military believe. It would be an unlawful order."

Gen. Marty Dempsey, a former chairman of the Joint Chiefs of Staff, agreed: "Our men and women in uniform are better trained, better equipped, and better led so they meet any threat with confidence. A wasteful deployment of over-stretched Soldiers and Marines would be made much worse if they use force disproportional to the threat they face. They won’t."

Before Trump became president, many warned of this type of scenario. I wrote about the possibility — and the legal requirement — that military servicemembers could disobey a president's manifestly unlawful orders in the context of Trump's praise for torture and his endorsement of killing the families of terrorists.

We're not there yet — in part because Trump's way of talking is so vague and non-committal that he can often avoid being pinned down to having any one meaning, or he can dismiss critics by claiming he was joking. But we do face a real potential crisis if Trump gets serious about directing the military to break the law. It's unclear where that would leave civilian control of the armed forces.