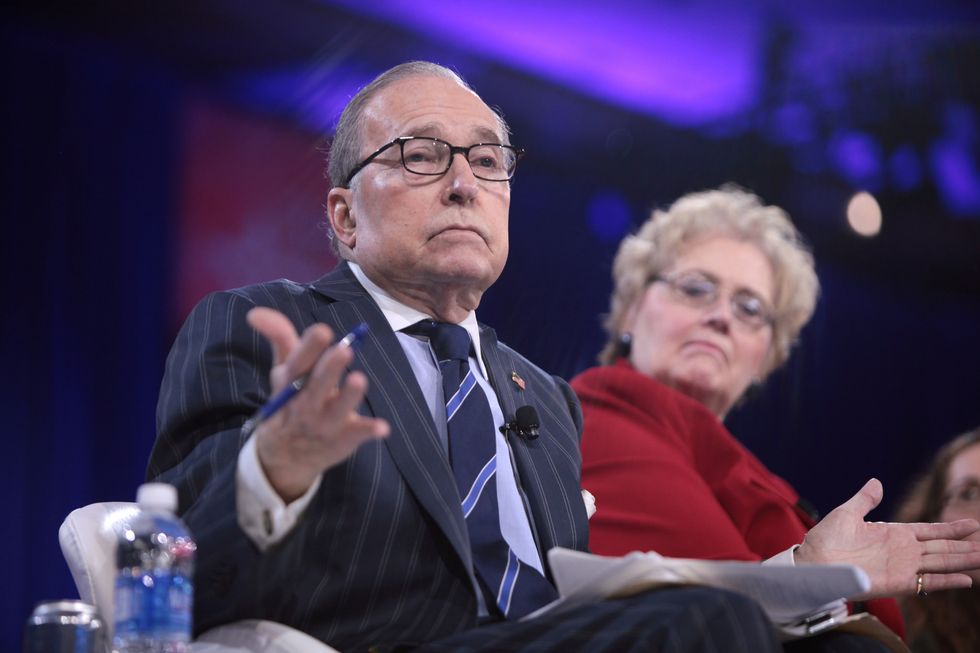 Despite mounting evidence to the contrary, White House economic adviser Larry Kudlow said Thursday that corporate tax cuts are the best way to lift low-income Americans out of poverty—not a federal minimum wage hike, which he denounced as "silly."

Kudlow, who heads the National Economic Council, told a crowd at a live event hosted by the Washington Post that the federal minimum wage overall—which was first introduced in 1938 as a way to alleviate the effects of the Great Depression on American families—is a "terrible idea" which damages small businesses' ability to operate.

The president's top economic adviser also said that should Democrats win control of the House or Senate in the midterm elections, the White House would fight against any effort to raise the federal minimum wage.

Progressives and Democratic lawmakers immediately seized on the comments as the latest proof that President Donald Trump's policies and proposals endanger working families while propping up corporations and the wealthiest Americans—and urged voters to keep that in mind when they go to the polls on November 6.

"Donald Trump and his advisers believe in huge tax breaks for billionaires, but when it comes to raising wages for workers they actually want to abolish the minimum wage," Sen. Bernie Sanders (I-Vt.) said in a statement following Kudlow's remarks. "Too many Americans today are forced to work two or three jobs to survive. That's wrong. If you work 40 hours a week, you should not live in poverty. We must raise the federal minimum wage to a living wage, $15 an hour."

Kudlow and McConnell are being very clear about what they want to do: get rid of the minimum wage, gut Social Secur… https://t.co/XqCacC1ccU
— Ruben Gallego (@Ruben Gallego)1541089909.0

The federal minimum wage has stood at $7.25 per hour—just over $16,000 per year—for nearly a decade. According to the National Low Income Housing Coalition, an employee earning the minimum wage would be unable to afford to rent a small two-bedroom apartment in any state in the nation.

While Kudlow suggested that corporate tax cuts are the most effective way to help working families, nearly a year after the passage of the Republican tax plan, that theory has been proven to be demonstrably false. According to the Tax Policy Center, 83 percent of the $1.5 trillion plan's benefits went to the wealthy, and only 4.3 percent of American workers were expected to see those benefits down to them in the form of raises or substantial bonuses according to Americans for Tax Fairness.

Kudlow also said that a federal minimum wage did not make sense for a country in which the cost of living varies from state-to-state.

"Idaho is different than New York. Alabama is different than Nebraska. That's why the federal minimum wage doesn't work for me," Kudlow said. The comment drew criticism from advocates for a $15 minimum wage—who believe that cost-of-living disparities mean that that minimum wage in more expensive states should be far higher than those in states with cheaper housing, to allow workers to support themselves and their families.