Trump used troops as political props. When will those who claim to revere soldiers hold him accountable? 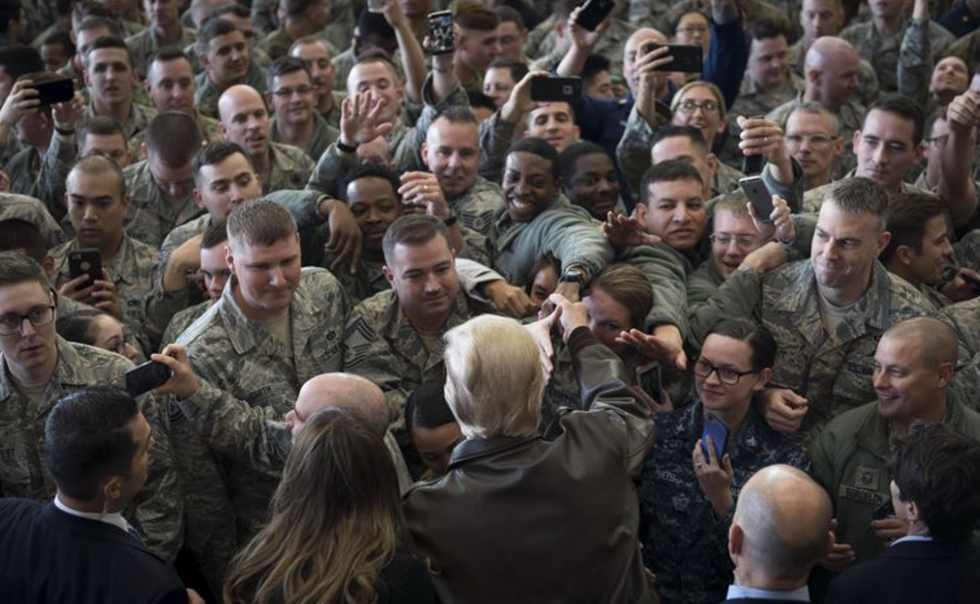 Here’s how you judge sincerity in politics: when a politician does something, a person with sincerely held principles judges that action in a consistent way—no matter which party that politician belongs to. Partisan hacks, on the other hand, judge the action based on whether the politician is on their side. Partisan hacks are those who would squeal like stuck pigs over a given action taken by an opponent, yet who say nothing or, even worse, applaud when their chosen leader acts similarly. Donald Trump’s White House has provided many, many opportunities for testing the sincerity of his followers.

Before the election, The Man Who Lost the Popular Vote announced a military operation called “Operation Faithful Patriot.” At least, that’s what it was known as until, the day after the election, a (hopefully) thoroughly embarrassed Defense Secretary James Mattis unnamed the operation, declaring it simply “border support.” It was ridiculous on its face: sending soldiers to our southern border NOW because a couple of thousand refugees were hundreds of miles away? It was nothing more than a ploy to buttress the disgusting Republican fear-mongering about the so-called caravan.

Before the election, President Barack Obama rightly called out Trump for this disgraceful misuse of American military personnel, characterizing it as “a political stunt.” More recently, a former soldier and top foreign policy official in the George W. Bush administration, Lawrence Wilkerson, co-authored an op-ed pieceentitled “Trump’s Border Stunt Is a Profound Betrayal of Our Military,” in which the authors condemned Mr. 46 Percent of the Popular Vote for using the military as “toy soldiers, with the intent of manipulating a domestic midterm election outcome, an unprecedented use of the military by a sitting president.”

A White House announcement from this week that the troops would be coming home by Christmas confirmed exactly that, as Politico’s Wesley Morgan reported:

The 5,800 troops who were rushed to the southwest border amid President Donald Trump’s pre-election warnings about a refugee caravan will start coming home as early as this week — just as some of those migrants are beginning to arrive.

This is as close to a sick burn as you are likely to see in a straight news article at Politico. And it’s in the lead paragraph.

The Politico article also pointed out a number of noteworthy aspects of what it called this “highly unusual deployment.” Although military personnel have been sent to the border before, in previous cases the troops were drawn from the National Guard, part-time service members commanded by state governors. This time, Trump demanded that we deploy “not just the National Guard.” That meant sending active-duty soldiers. Apparently, the Department of Homeland Security asked for armed military personnel in case the caravan, about 50 percent girls and women, got violent and border patrol agents needed more firepower.

Thankfully, the military denied that request, as the general in charge of the deployment explained: “That is a law enforcement task, and the secretary of Defense does not have the authority to approve that inside the homeland.” You see, Mr. President, you can’t use the military to enforce the law inside our borders. That restriction on presidential authority is a cornerstone of keeping this a country free of dictatorial rule. Don’t doubt Donny is exploring options to get around it.

As for the fear Trump sought to gin up before the election over this so-called crisis, it seems that once the election was behind us, there wasn’t much need for him to keep on ginning, as this news article in the New York Times noted:

For weeks before the midterm elections, President Trump warned ominously about the threat from a caravan of migrants streaming from Central America toward Mexico’s border with the United States. It was a fearsome mix of criminals and “unknown Middle Easterners,” Mr. Trump claimed darkly, one that constituted a genuine national emergency.

But since the election last week, Mr. Trump has tweeted about the caravan exactly once — to issue a proclamation preventing those who cross the border illegally from applying for asylum in the United States. Fox News, which faithfully amplified Mr. Trump’s warnings about the migrants, has gone similarly quiet on the subject.

Clearly, Trump didn’t appreciate it when he was asked for a Thanksgiving message for the troops—who will be spending that holiday eating ready-to-eat field rations while he feasts at Mar-a-Lago.

Here’s the response of the commander in chief to that question: “Don’t worry about the Thanksgiving—These are tough people.”

Let’s get real about what Trump did here, in terms of both the rhetoric he and his party used about the caravan, and the troops he misused—and don’t forget that Republicans have long claimed not only to respect, but to revere the U.S. military. What Trump did here shows the ultimate lack of respect for our troops. As for rhetoric, the core of Trump’s message all along has been white nationalism and white identity politics. Not all of his supporters were drawn to him for those reasons, no, but it has been without question at the center of his rhetoric from day one. Never forget that he began his campaign saying that Mexico was sending to the U.S. people who are “bringing drugs. They’re bringing crime. They're rapists.”

Look at who votes for Republicans. According to exit polls from the recent midterms, thanks in part to Trump’s heavy emphasis on this kind of racially divisive politics, large majorities of voters of color voted for the Democrats—this is true for African Americans (90 percent), Asian Americans (77 percent), and Hispanic Americans (69 percent). There was a time when Asian voters were much more up for grabs. In the most recent midterms before this year, a slight majority actually favored the Republicans. The shift among them is profound. Likewise, 44 percent of Latinos wentfor George W. Bush in 2004. Although these huge shifts didn’t begin with Trump, he has certainly exacerbated them.

Additionally, as for religious groups, Jewish Americans voted for Democrats by 79 percent to 17 percent; those of “other” religions favored Democrats by 73 percent to 25 percent; and the religiously unaffiliated did so 70 percent to 28 percent. White Christians, on the other hand, favored Republicans. While there’s no specific breakdown for them overall, white evangelical Christians voted overwhelmingly for Republicans—75 percent to 22 percent.

Trump is doing more and more to make the Republican Party into a movement of, by, and for white religious Christians. That is deadly in a multiethnic, pluralist society. When one party becomes the province of a particular ethnocultural group, it hardens divisions and turns politics into a question of identity rather than policy.

It’s even more dangerous when the ethnocultural group in question is not only the most powerful group, but also a group in relative decline as others in the society begin to achieve equality and thus threaten the powerful group’s dominance. At the risk of oversimplifying things, we saw that happen in the multiethnic Austro-Hungarian Empire, and one result was the radicalization of some within the once-dominant Austro-German population.

Trump is not Hitler, let’s be clear about that. Although white supremacists in this country and, apparently, in South Africa definitely see him as a kindred spirit. The rhetoric around the caravan and the use of troops to back up that rhetoric play into the fears around demographic change and the browning of America.

Democrats support secure borders, but the difference is that we don’t demonize the people trying to come across in order to score political points. We understand that unleashing hate has consequences. I think Trump does as well; it’s just that he sees the consequences as positive ones. His supporters either don’t care, or they agree.

I began this piece by comparing those who hold sincerely held principles to partisan hacks. In the case of Trump, who has taken actions and made statements that directly contravene our basic democratic values, I don’t think the term “partisan hack” is quite enough. The term is far too banal for people who clap louder and nod more vigorously when their leader hacks away at the concept of truth, stokes racial anger and fear, and, in the incident highlighted here, uses soldiers as props to win votes in an election. Our own Greg Dworkin has frequently used a term that I believe applies to these people. Authoritarian enablers is what they are.

Ian Reifowitz is the author of Obama’s America: A Transformative Vision of Our National Identity (Potomac Books).