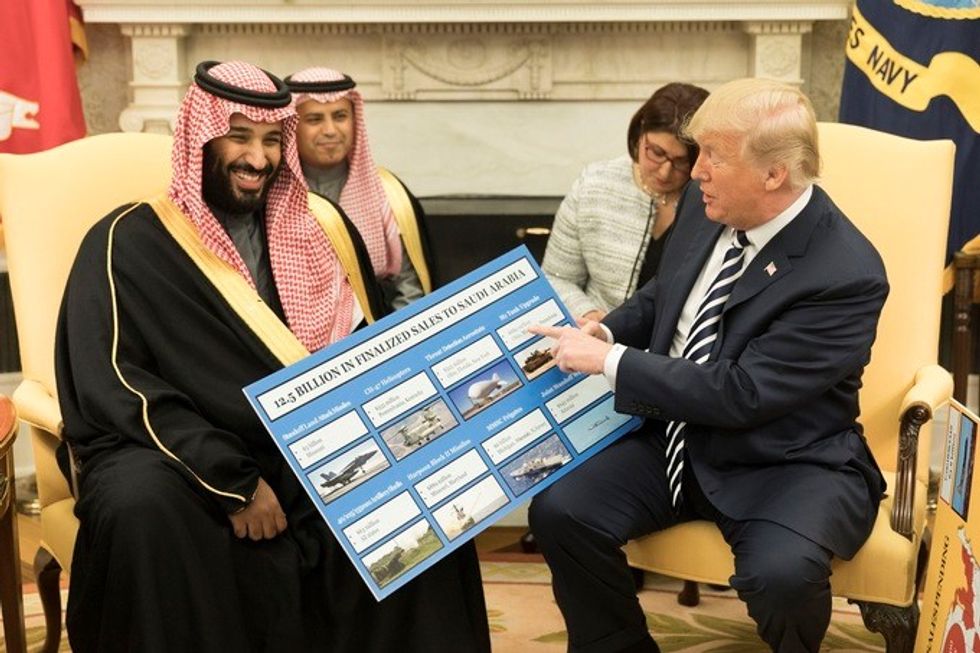 In a clearly strained opinion piece, the Wall Steet Journal editorial board — which tends to be as breathlessly supportive of the current White House as Breitbart or Fox News — issued a nevertheless stinging critique of President Donald Trump's defense of Saudi Arabia.

As convincing evidence has accumulated indicating that Crown Prince Mohammad bin Salman directly ordered the assassination of Washington Post journalist Jamal Khashoggi, including reports that the CIA has "high confidence" in this conclusion, Trump has stood fast by his administration's Middle East ally. The president issued a statement Tuesday casting doubt on these conclusions, essentially claiming the facts are unknowable while amplifying Saudi propaganda that attacked Khashoggi as an "enemy of the state."

The Journal's editorial board said Trump's "crude statement" did little to help himself or the country.

"The bloody realities of the Middle East and the clear threat from Iran, which Mr. Trump described in his statement, give any U.S. President some latitude in forging a policy toward the region that reflects America’s interests," the Journal continued. "But we are aware of no President, not even such ruthless pragmatists as Richard Nixon or Lyndon Johnson, who would have written a public statement like this without so much as a grace note about America’s abiding values and principles."

Trump, it concluded, is "incapable" of balancing U.S. interests and ideals. The editorial goes on to say that Trump's defense of partnering with Saudi Arabia on the grounds of its deals with American defense contractors was "startling" and "crass." (The Journal fails to note that the dollar amounts Trump has attributed to the deals are wildly inaccurate and inflated.)

While the editorial distanced itself from those who are "moralizing" and arguing for a complete end to the American alliance with the Saudis, it made clear that Trump's approach is both morally problematic and destined for failure.

But because of the Journal's long-standing fealty to Trump's larger agenda (with the exception of his trade policies), it failed to issue the more blistering critique that the president's approach deserves — even by the editorial's own logic.

For instance, the Journal refers to Trump's policy as a "raw and brutalist" version of realpolitik. But this is wrong. "Realpolitik" means an approach that is based on practical considerations as opposed to moral — which doesn't apply in this case, The two considerations don't come apart. By ignoring the moral implications of the Saudi regime's act, Trump is alienating his allies in Congress like Sen. Lindsey Graham (R-SC), which dooms his strategy. In this case, doing the wrong thing is neither moral nor practical for Trump — which means it should be classified as vile and evil. There's no doubt that, had these actions been taken by a president the Journal was more generally critical of, its editorial would have been a resounding condemnation — and perhaps a call for impeachment.

The only defense the Journal could make of Trump's actions is that he's too uninformed to realize the consequences. But of course, it can't bring itself to say that — it has spent far too long carrying water for this hapless and cruel administration.