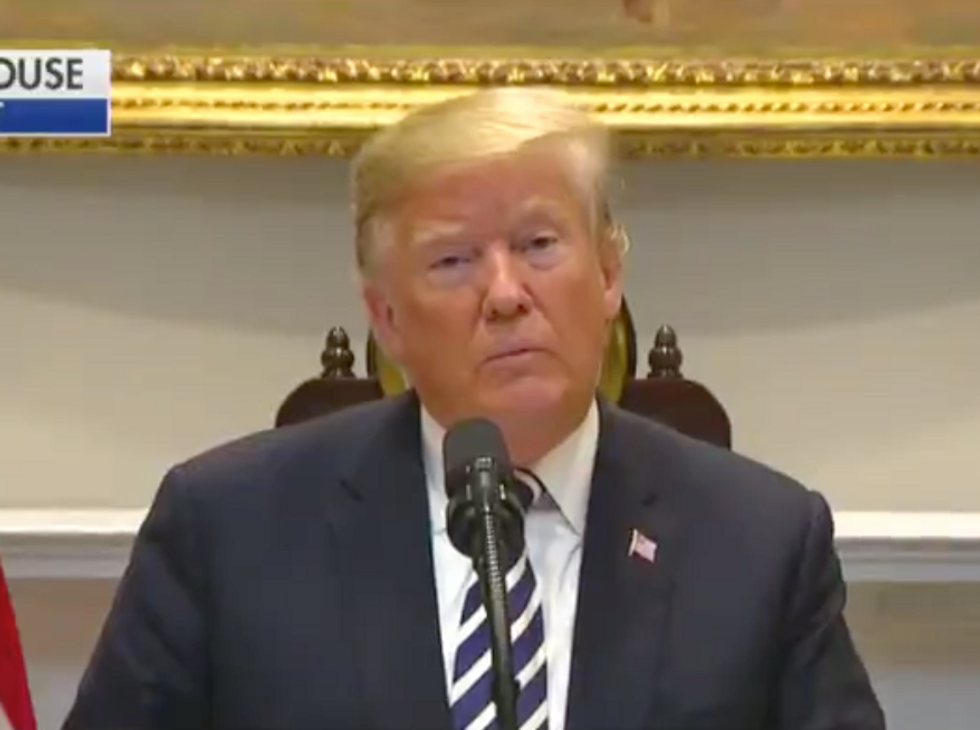 Media outlets planned to cover a major policy announcement from President Donald Trump on Thursday afternoon, but instead, they were essentially duped into airing a campaign speech from the White House.

With the pretense that he was going to present a proposal for changes to U.S. asylum policy, the president launched into one of his typical rants — though somewhat more muted — including his usual lies about immigrants and campaign-style attacks on Democrats.

He lied that his administration is building his promised border wall, he lied about asylum-seekers, he stoked conspiracy theories about the Central American immigrant caravan, and he lied about the number of undocumented immigrants in the country. He attacked Stacey Abrams, a Democratic gubernatorial candidate, as "unqualified," despite the fact that she is far more qualified to be governor than he ever was to be president.

"Trump says, as always without any evidence, that asylum seekers are given phony statements to read when they get to the border. He again promises 'massive cities of tents,'" noted Toronto Star reporter Daniel Dale. "He lies that only '3%' of asylum seekers show up for trial."

Dale added: "This is very dishonest and very fearmongery, and also the same old."

CNN reporter Kaitlan Collins agreed: "President Trump is essentially repeating his past remarks on immigration — caravans, bad laws, etc. — just in a toned down manner. I haven’t heard anything new yet. (We were told it would be new asylum proposals.)"

In the end, Trump announced that his administration is "finalizing" new asylum policy changes, but he didn't provide any details. There was no point to the speech — except to further spread his misinformation and hate for immigrants.

The most vicious part of his speech, however, was when he spoke of migrants coming to the U.S. border. He said if they try to throw a rock, "We will consider that a firearm. Because there's not much difference."

As Dale pointed out: "He's saying, obviously, that he wants rock-throwers shot."

While MSNBC had declined to air the speech live, CNN broadcast Trump's speech directly, exposing millions of viewers to his lies.