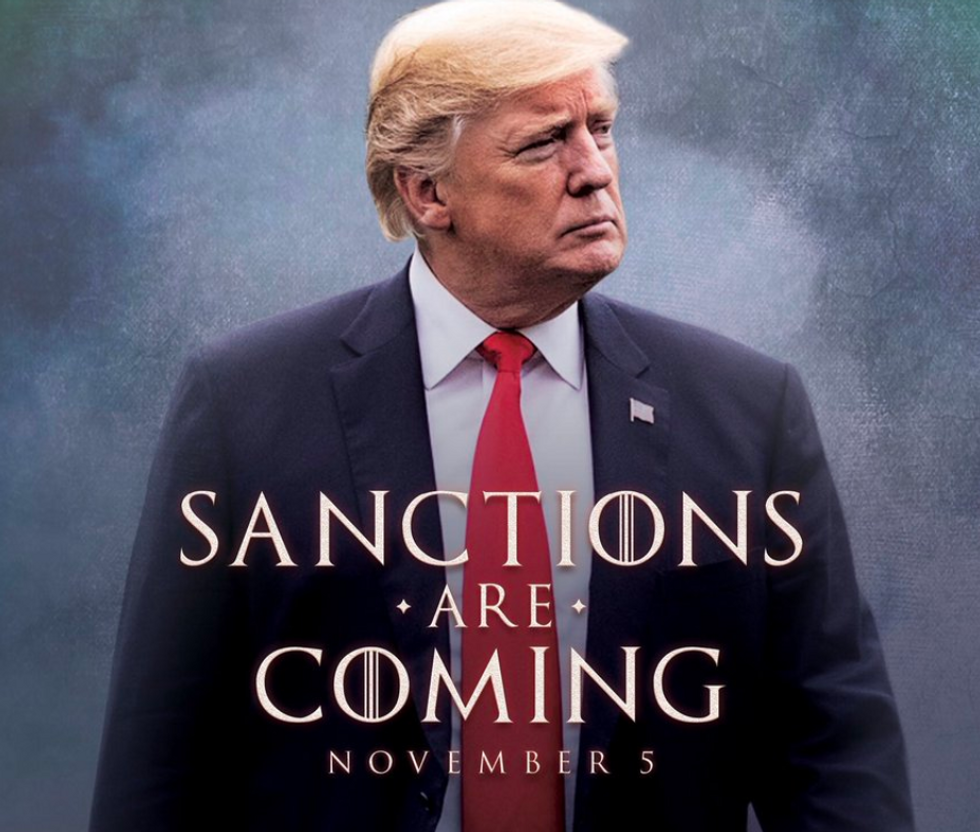 Treating the welfare of the Iranians people like a TV show, Donald Trump used a meme from Game of Thrones—an arrogant, stylized photo of himself with the tagline: “Sanctions Are Coming November 5”—to announce the new round of crippling sanctions targeting Iran’s oil exports, banks and shipping.

This is the second round of sanctions since Trump pulled out of the Iran nuclear deal, a deal that was signed in 2015 not only by the U.S. and Iran, but also by Germany, England, France, Russia and China—and approved unanimously by the UN Security Council. It’s also a deal that has been working. Iran has been complying with the most intrusive inspections regime ever devised, as the International Atomic Energy Agency has confirmed 13 times.

Trump, always ready to bulldoze international agreements, unilaterally withdrew from the deal and imposed a first round of sanctions in August and the second round now. These sanctions are designed to stop not just U.S. companies from trading with Iran, but all companies—anywhere in the world. According to Treasury Secretary Steve Mnuchin, “Any financial institution, company, or individual who evades our sanctions risks losing access to the U.S. financial system and the ability to do business with the United States or U.S. companies.” In effect, the Trump administration, practicing imperial hubris on steroids, is determined to punish countries abiding by an internationally approved agreement.

Faced with U.S. threats, big Western companies that had recently signed contracts with Iran, such as Total, Eni, Boeing, Airbus, and Peugeot, have canceled multibillion-dollar deals.

Desperate to counter U.S. sanctions, the European Union is creating a mechanism called the “special purpose vehicle.” It is essentially a barter system, similar to one used by the Soviet Union during the Cold War, to exchange Iranian oil for European goods without money changing hands. The U.S. government has vowed to sabotage this effort. “I have no expectation that there will be any transactions that are significant that go through a special purpose vehicle based upon what I’ve seen,” Treasury Secretary Steve Mnuchin said. “But if there are transactions that have the intent of evading our sanctions, we will aggressively pursue our remedies.”

Secretary of State Mike Pompeo boasted that even before the November 5 sanctions went into effect, the U.S. had already succeeded in reducing Iranian crude oil exports by more than 1 million barrels, and insists that the goal is to stop all Iranian oil exports. The administration is granting temporary waivers to eight countries, including India, South Korea and Japan, principally out of concern that withdrawing so much oil from the market at once would lead to a spike in global oil prices. Moreover, they are merely six-month waivers contingent on countries “winding down” their oil business with Iran. A major stipulation for the waivers is that Iran’s revenues must be kept in foreign accounts that can only be used for trade in “nonsanctioned goods and services.”

While this economic stranglehold is officially designed to “stop Iran’s destabilizing activities across the world,” Trump administration officials are known to be gunning for regime change, hoping that distraught Iranians take to the streets to overthrow their government.

Indeed, since last December there have been sporadic protests against the economic hardships. But will unorganized protesters really be capable of toppling a well-armed, tightly controlled regime? Some analysts speculate that what the Trump administration wants in Iran is not even regime change but chaos, with Iranians fighting each other so they won’t be projecting power beyond their borders.

Trump’s wishful thinking aside, the most likely effects of the sanctions will be to further inflame regional conflicts, empower conservative forces in Iran, make other governments resentful of U.S. imperial overreach and worst of all, needlessly cause suffering to millions of Iranian citizens.

The sanctions are already taking a tragic toll. While there are humanitarian exemptions on food and medicines, restrictions on banks and shipping companies make even exempted items difficult to obtain. Asked about humanitarian exemptions, French Ambassador to Washington Gerard Araud said, “The banks are so terrified by the sanctions that they don’t want to do anything with Iran.”

Below is a sampling of the desperate messages we at CodePink have been getting from people in Iran:

Iranian government officials want to know how the Trump administration can get away with punishing Iran and other countries for complying with the internationally recognized nuclear deal signed in 2015. “The U.S. is, in effect, threatening states who seek to abide by Resolution 2231 with punitive measures,” said President Rouhani. “This constitutes a mockery of international decisions and the blackmailing of responsible parties who seek to uphold them.”

Donald Trump is only too happy to make a mockery of international decisions. It is up to the rest of the world to stop him.