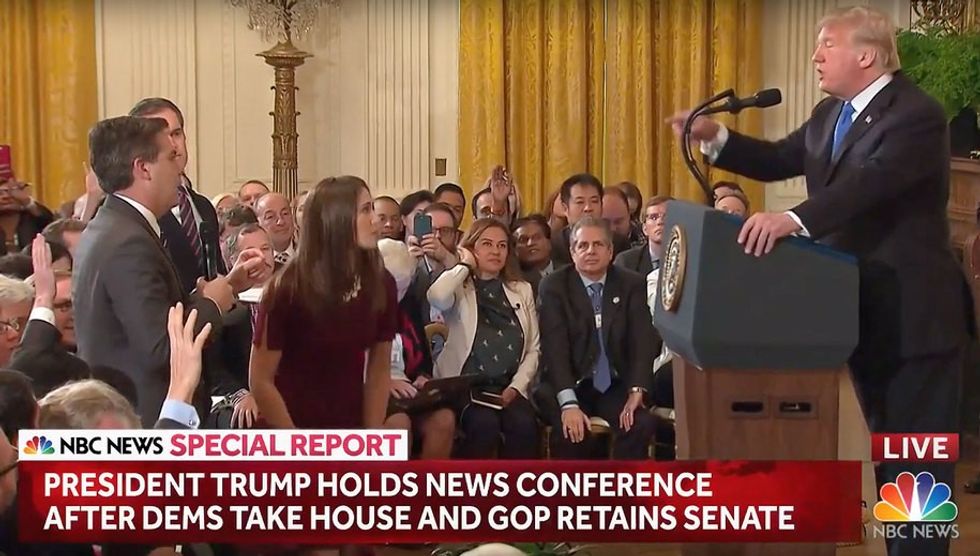 Speaking from his years of experience being pursued by the Obama Justice Department for simply practicing journalism and refusing to reveal his confidential sources, Intercept reporter James Risen told The Hill on Monday that President Donald Trump is building on his predecessor's war on the free press by "demagoguing" the media "in a way we haven't seen in modern American history."

"Obama tried to put me in jail for seven years... A lot of conservatives try to point to me as an example of Obama on press freedom and I fully agree with the view that he had a terrible record on press freedom," Risen said. "The difference with Trump is that he is demagoguing the issue in a way we haven't seen in modern American history."

Asked if, given his history, he believes the Trump White House is a greater threat to press freedom than the Obama White House was, Risen said, "I didn't think I would get to the point where I would say that, but I do believe that now."

Risen's assessment of Trump's attacks on the press throughout his first two years in office came just after the White House on Monday threatened to revoke CNN reporter Jim Acosta's credentials as soon as the emergency restraining order imposed by a federal judge expires in two weeks.

In a statement, CNN said Trump is continuing to violate the First and Fifth Amendments and that the administration's "actions threaten all journalists and news organizations."

Risen echoed this sentiment in his interview with The Hill, arguing that Trump's attack on Acosta is a "symbol" of his broader war on journalism.

Trump, Risen said, is "going to the people constantly to try to destroy their belief in the press and I think the Acosta incident is really just a symbol of that—it's a symbol of an attempt to discredit not only CNN but the entire press corps in Washington and really more generally the press all over the country."

As Common Dreams reported, in addition to the White House's attacks on CNN, Trump's Justice Department also inadvertently revealed in a court filing that it has secretly charged WikiLeaks founder Julian Assange, who has been living in the Ecuadorian Embassy in London since 2012 to avoid extradition to the U.S. for publishing classified and embarrassing information that the American government was keeping secret from the public.

Journalists and civil liberties advocates immediately decried the unspecified charges as a dire threat to the free press.

"Any prosecution of Mr. Assange for WikiLeaks' publishing operations would be unprecedented and unconstitutional, and would open the door to criminal investigations of other news organizations," Ben Wizner—director of the ACLU's Speech, Privacy, and Technology Project—warned in a statement last Friday.