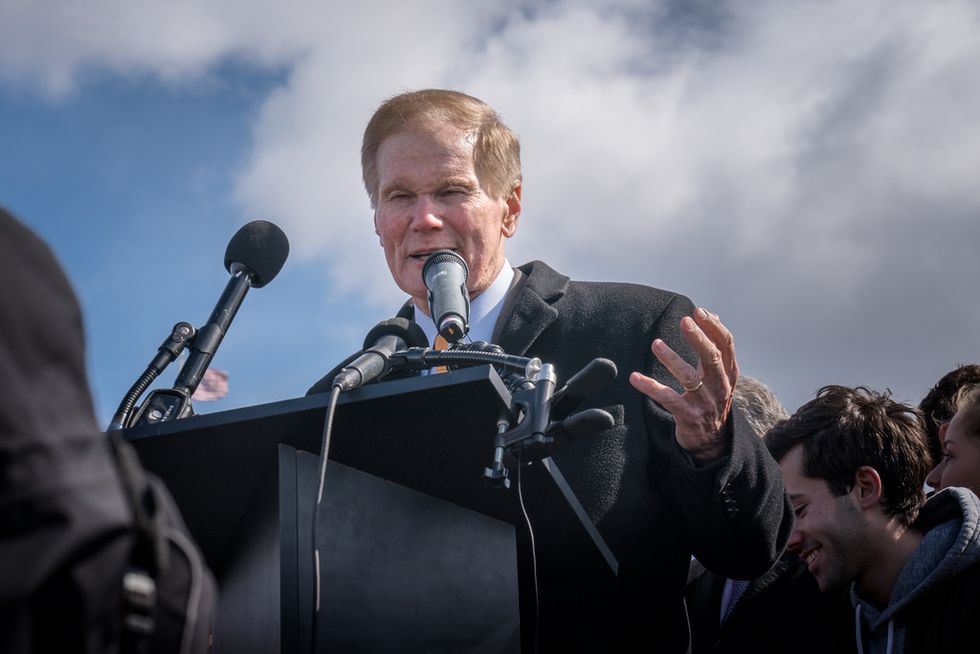 Tuesday's election did not go well for Republicans, but it has been getting even worse for them since then as ballots continue to trickle in.

In Florida's Senate and gubernatorial races, Republicans are panicking at the prospect of a recount even though they are still slightly ahead. Meanwhile in Arizona, the steady counting of mail-in ballots has turned the narrow lead the GOP held in the Senate race on Election Night into a more than 30,000-vote deficit, putting Democratic Rep. Kyrsten Sinema on track to become the first Democrat to win a Senate race there since 1988.

Republicans have responded to the embarrassments with a long string of conspiracy theories. Here are three of the craziest ones:

On Thursday, Sen. Marco Rubio retweeted a video, demanding, "Has anyone in local media looked into this claim or asked elections dept about it?"

The video was originally posted to Twitter by Tim Canova, a local professor and gadfly candidate who twice tried to primary Democratic Rep. Debbie Wasserman Schultz, once with Bernie Sanders' blessing, and in this election ran as an independent. A conspiracy theorist who previously suggested Democrats had DNC staffer Seth Rich murdered, Canova, along with the supporter who shot the video, claims it shows filled-out Broward County ballots being illegally loaded into trucks and driven off, possibly to be destroyed and replaced with "fake ballots."

The video, filmed from a distance, does not actually show what is in the boxes, so there is no evidence they contained filled-out ballots, as opposed to unused ballots or some other kind of election equipment. Even Canova himself acknowledged this, but added "the video itself demands an investigation."

Incredibly, Canova is now running interference for GOP Gov. Rick Scott as he tries to demonize Broward County supervisor Brenda Snipes, find a pretext to shut down the vote tally, and declare himself the winner of his race against incumbent Sen. Bill Nelson without a state-mandated recount. "For two years, I have been warning that the Broward Supervisor of Elections office is a swamp of corruption," Canova wrote in an op-ed for the South Florida Sun-Sentinel. "I'm sure Gov. Scott now wishes he had heeded those warnings."

It makes no sense for the GOP to claim a far-left independent's conspiracy theory about his ballots being "stolen" somehow proves Republicans are being targeted and that the fix is to stop counting ballots. But logical consistency doesn't seem to be their strong point.

Moore is referring to the fact that Fontes, when he was working as an attorney, defended a group of straw buyers who were tracked as part of the 2010 ATF "gunwalking" scandal. Under a sting operation at the beginning of President Barack Obama's administration, called "Operation Fast and Furious," federal agents let licensed firearms dealers sell to gun runners, hoping to track them over the border to the Mexican drug cartels and make larger arrests. Unfortunately, they lost track of the illegal shipments, and the guns ended up being used in a number of crimes, including the murder of Border Patrol Agent Brian Terry, and provoked diplomatic tensions between Mexico and the United States.

The failure of this operation became a rallying cry of Republicans arguing Obama was soft on crime or corrupt. But why Fontes doing his job as a lawyer and representing defendants caught in this sting would discredit his ability to administer the election is left to the imagination.

Furthermore, as even outgoing Republican Sen. Jeff Flake made clear, Moore can't seem to provide any evidence for his claim that Fontes is "destroying evidence to cook the books for Kyrsten Sinema."

George Soros, a liberal Hungarian-born billionaire philanthropist and Holocaust survivor who has devoted much of his fortune to promoting democracy in Eastern Europe, has been the repeated focus of vicious, and often anti-Semitic, conspiracy theories from the far right. So it is perhaps little wonder that the GOP also tried to drag his name into all of this.

This weekend, the Arizona Republican Party filed a public records request seeking any interaction between Soros and the Maricopa County elections office.

There is, of course, not a shred of evidence Soros had any contact with election administrators in Arizona, but Republicans seem desperate to uncover some. And this rhetoric could have dangerous consequences, especially coming less than a month after a fanatical supporter of President Donald Trump mailed a pipe bomb to Soros' house.

Taken together, these conspiracy theories paint a picture of a political party that has no interest in objective reality or the integrity of the ballot process, and that will say whatever it takes to cast doubt on their opponents' legitimacy.