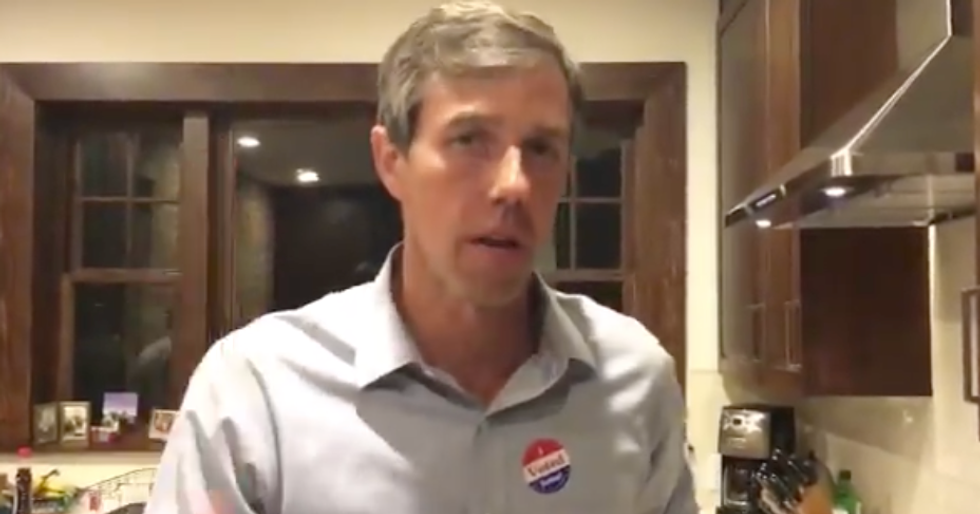 By Emma Platoff, The Texas Tribune

"Texas Democrats were aiming for historic wins in 2018. What they got instead was hope for 2020." was first published by The Texas Tribune, a nonprofit, nonpartisan media organization that informs Texans — and engages with them — about public policy, politics, government and statewide issues.

Texas Democrats on Tuesday came closer than they have in two decades. But the “blue wave” many had hoped for failed to crest over the state.

For the 20th year running, Republicans swept every statewide election in Texas, soaring to victories in the governor’s mansion, the attorney general’s office and the U.S. Senate, the most closely-watched top-of-the-ticket contest. El Paso Democrat Beto O’Rourke lost a hard-fought, nationally-watched U.S. Senate race to incumbent Ted Cruz. The margin was just three points — a tighter race than Democrats have achieved in years. And several statewide Republican incumbents were elected by mere single digits.

It is a weaker grip than Texas Republicans have held in decades. But it is a full-fingered grip nonetheless — the party maintained control of the two high courts and kept dominant majorities in both houses of the state Legislature and in the delegation to the U.S. Congress.

In 2018, in a midterm expected to rebuke a GOP-dominated federal government and a controversial occupant of the White House, Texas Democrats saw an opening for historic victories. Instead they found hope for 2020.

Texas Democratic Party Chair Gilberto Hinojosa hailed the failure of the full slate as a victory, citing “the best statewide margin in a generation.”

In his concession speech, O’Rourke was — as ever — optimistic.

"I am as inspired and hopeful as I have ever been in my life,” a hoarse O’Rourke told a crowd of thousands in his home city of El Paso. “Tonight's loss has done nothing to diminish the way I feel about Texas and this country."

One source of Democratic optimism: single-digit victories for a handful of Republican incumbents who swept into office by double digits in 2014.

Even as Gov. Greg Abbott easily won a second term, winning some 56 percent of the state, other top incumbent Republicans trailed him significantly. None struggled more than Attorney General Ken Paxton, who has served most of his first term under indictment for securities fraud. In 2014, Paxton won his first term by 21 percentage points; this year, that margin of victory was about four points.

Democratic challenger Justin Nelson ran a particularly tight race, following an aggressive campaign built around Paxton’s indictment, complete with a rolling billboard he called the “Mugshot Mobile.” The campaign “isn’t about right versus left,” Nelson liked to say — “it’s about right versus wrong.”

Lt. Gov. Dan Patrick, who heads a socially conservative faction of the Republican Party, won another term on the dais with a five-point lead — less than a third of his 19-point victory in 2014. Patrick, a champion of “school choice” — programs that would give Texas families subsidies to send their kids to private schools — has drawn the ire of many education-minded voters, thousands of whom pledged to block-vote for his opponent, Democrat Mike Collier.

“Somewhere the Republicans are toasting, but their hands are shaking,” Collier told a thinning but enthusiastic room of supporters at the Driskill Hotel in Austin late Tuesday night. “I ain’t going nowhere.”

Other bright spots for Democrats came in the U.S. House and the Texas House, where Democrats knocked off powerful Republicans. O’Rourke didn’t quite topple Cruz, but he carried Democrats to victory in battlegrounds suburbs, particularly around Dallas, where a slate of Texas House Republicans and one powerful U.S. House member, House Rules Chairman Pete Sessions, were unseated.

Texas’ congressional delegation — the second-largest in the country after California — has ever-so slightly shifted its tilt toward the center. Democrats picked up three seats, knocking off Sessions and Houston-area U.S. Rep. John Culberson. That took the delegation from a lopsided 11–25 split favoring the Republicans to a tighter 13–23.

And in the Texas House, Democrats picked up a dozen seats, bringing the minority party to a level it hasn’t seen in a decade. And Democrats positioned themselves to carry ever-so-slightly more influence in the upcoming race for speaker of the Texas House.

In the Texas Senate, Democrats knocked off two Republican incumbents, Konni Burton and Don Huffines, both from battleground North Texas. But a close race that ultimately favored state Sen. Joan Huffman, R-Houston, means Texas Republicans continue to hold the powerful 19-seat advantage that will allow them to bring bills up for a vote on the Senate floor without any Democratic support.

Texas Democrats flipped four major appeals courts, taking back majorities in the judicial districts that serve Austin, Dallas and Houston. The 5th Court of Appeals, based in Dallas, has not elected a Democrat since 1992; on Tuesday, the 13-member court elected eight Democrats, including a Democratic chief justice.

But if Texas Democrats achieved little more than a crack in the dam, its placement was noteworthy. O’Rourke led battleground suburban counties like Williamson and Hays. And he cut down Republicans’ traditionally hefty margins in reliably red counties, coming neck-and-neck with Cruz in Tarrant County, suggesting the state is purpling faster than many expected.

O’Rourke’s historic margin could change the national calculus on the country’s second-largest electoral prize during the 2020 presidential run.

The Texas Democratic Party certainly seemed to think so. Hinojosa said Tuesday night’s results have “definitively shown Texas is in play in 2020.”

That could be especially true if O’Rourke makes a presidential bid — a much-hyped speculation from national politicos that the El Paso Democrat has so far shot down.

In its victory lap Tuesday night, even Cruz’s camp suggested just that.

“He is in a league of his own in the Democrat Party,” said Jeff Roe, Cruz’s chief strategist. “If he doesn’t use that to run for president, then I don’t know what he’d do with it.”

And in his exhausted, emotional goodbye late Tuesday night, O’Rourke did not entirely dismiss that possibility.

“We will see you out there down the road,” he said.

Disclosure: The Driskill Hotel has been a financial supporter of The Texas Tribune, a nonprofit, nonpartisan news organization that is funded in part by donations from members, foundations and corporate sponsors. Financial supporters play no role in the Tribune's journalism. Find a complete list of them here.

This article originally appeared in The Texas Tribune at https://www.texastribune.org/2018/11/07/blue-wave-texas-democrats-beto-orourke-midterms-2018/.