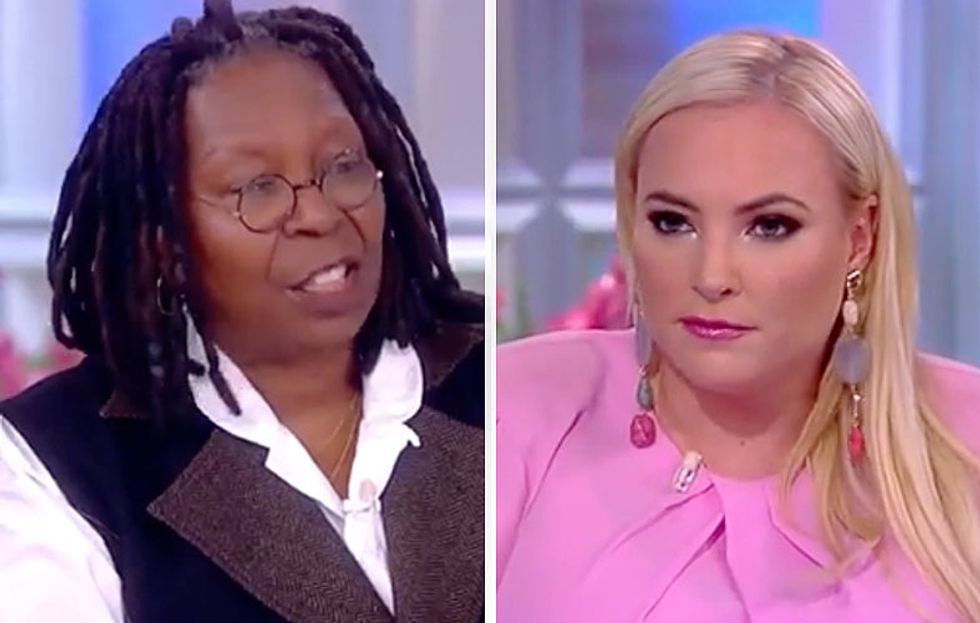 The two conservative co-hosts on “The View” blamed CNN’s Jim Acosta for a tussle over a microphone that got him banned from White House press briefings — but former prosecutor Sunny Hostin explained why they’re wrong.

President Donald Trump called Acosta a “rude, nasty person” for asking questions during a news conference, and a White House intern tried to grab the microphone from his hand — and press secretary Sarah Sanders accused the reporter of inappropriately touching the young woman.

“I don’t like it when men touch me, in general, without asking for permission,” said co-host Meghan McCain. “If I were handing that and some man went like this, I wouldn’t like it. Is it assault? I don’t think it goes to the level of assault. Is it inappropriate — 100 percent.”

Co-host Joy Behar said the video shows Acosta pushing her arm away to keep the intern from taking the microphone he was holding, and Hostin explained the legality of the interaction.

“For me, when I saw that, I mean, I learned very early on that what I saw was battery — not by Jim Acosta, but by the young White House aide,” Hostin said. “When you are holding something, if I may, if you’re holding something and you snatch this from me, this cup is now an extension of me, and that means you’ve battered me, you’ve assaulted me.”

Huntsman was the first to retort.

“So you’re blaming the woman in this situation, for doing her job,” Huntsman exclaimed.

Hostin said she wasn’t assigning blame, and McCain blew up next.

“So that White House aide should be arrested for battery,” McCain said.

“I’m telling you what the law is,” Hostin said.

“So we should get her arrested for battery, clearly,” McCain continued. “I’m saying that facetiously, obviously. You better arrest her, I mean, I better go arrest her for battery.”

Host Whoopi Goldberg heard enough, and asked McCain to let Hostin give her legal assessment of the incident.