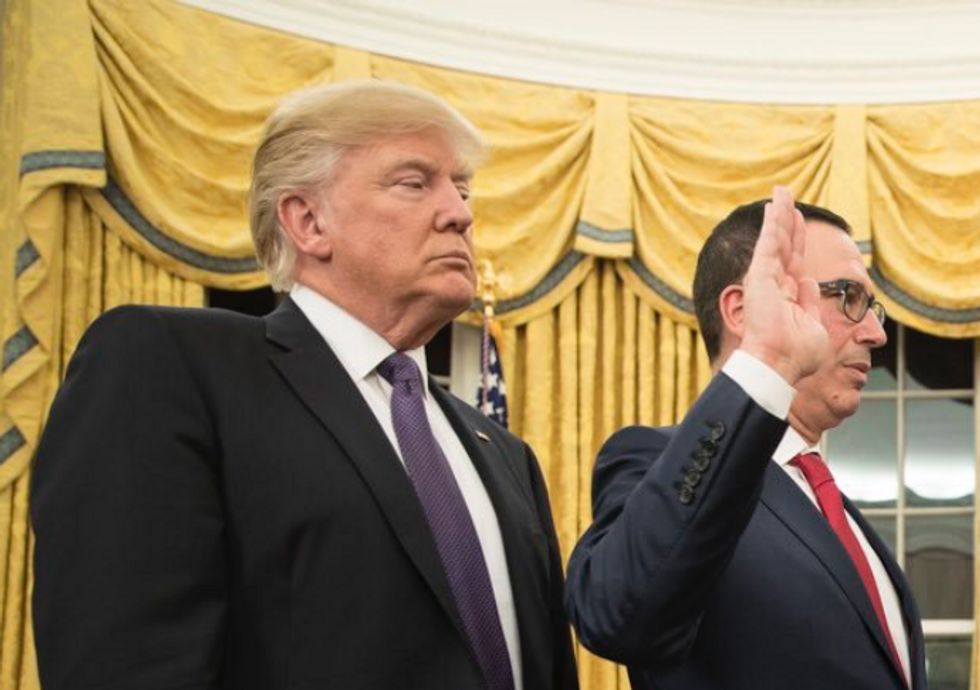 In one of the most-high profile casualties yet of President Donald Trump's failed trade war, General Motors announced on Monday it will be shuttering multiple auto plants, including two in Michigan and Ohio, laying off 14,700 workers, and discontinuing several vehicles — news that sent shockwaves across the Rust Belt and laid bare the failure of Trump's promise to boost manufacturing employment.

In characteristic fashion, Trump tried to bully his way out of the problem, threatening to revoke GM's electric car subsidies and sending their stock into a tailspin.

But Trump wasn't alone. Treasury Secretary Steve Mnuchin jumped into the fray, by retweeting an attack on GM:

A remark that was just the angry rantings of an anonymous Trump supporter on social media, looked much more like a threat when retweeted from the verified government account of one of the Trump administration cabinet members in charge of the financial system.

Shortly, however, Mnuchin put out a message claiming that the retweet wasn't his, and that someone gained unauthorized access to his account:

A retweet was posted last night on @stevenmnuchin1 by someone other than the Secretary or an individual with author… https://t.co/E2UnTQ9r8A
— Steven Mnuchin (@Steven Mnuchin)1543416810.0

It is entirely possible that someone did indeed break into Mnuchin's account. But given the president took to Twitter to threaten GM, and proceeded to retweet the exact same tweet Mnuchin did, it would not at all have been off-message if Mnuchin retweeted it himself.

GM received multibillion dollar bailouts in 2008 and 2009 from Presidents George W. Bush and Barack Obama at the height of the economic downturn. The company actually did pay back all of the loans the government made them, with interest — although taxpayers still lost money because the government sold off the GM stock they bought as part of the deal for less than they paid for it. Regardless, the deal allowed GM to grow for years, and by 2016 profits were at record highs, their cars were winning awards, and their sales soared to 10 million vehicles worldwide. The boom was already tapering off somewhat in Trump's first year, but he made matters much worse with his steel tariffs, which reportedly increased the cost of GM's raw materials by $1 billion.

Mnuchin and Trump should look at the damage their own administration's policies have done to the auto industry, rather than shooting the messenger.