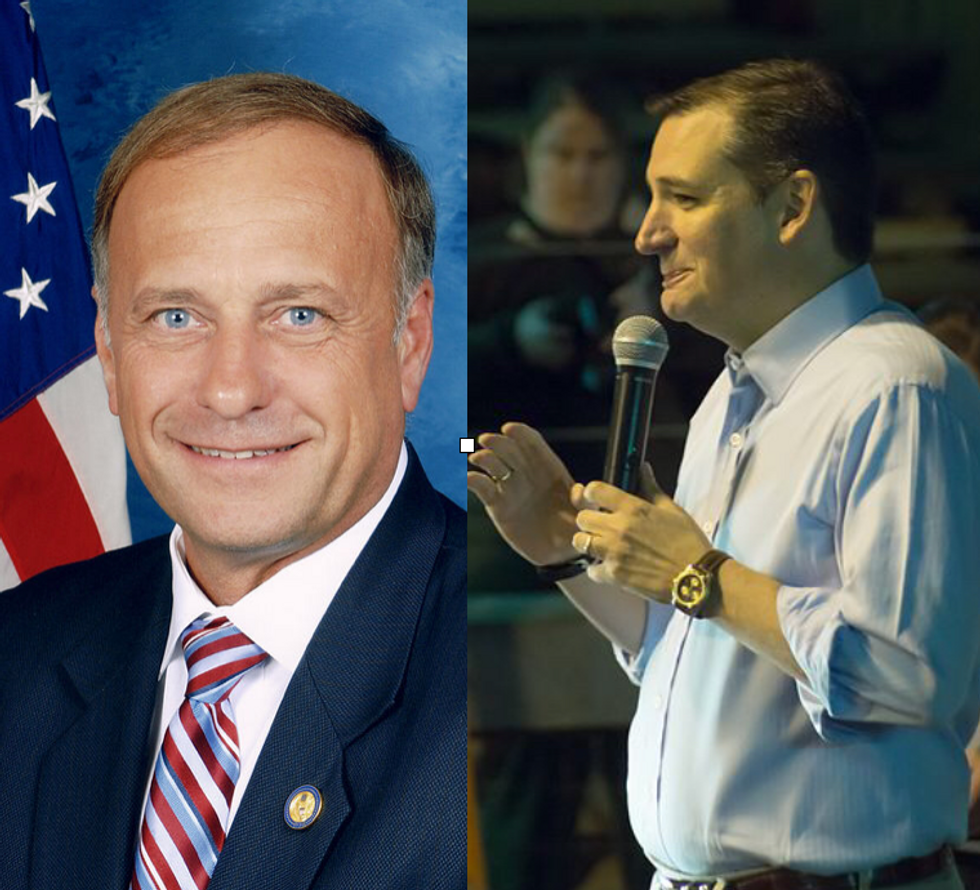 If King is telling the truth, that would contrast with the already-tepid public statement Cruz made on the matter to reporters for the Dallas Morning News at a campaign stop in Midland that same day, where he refused to directly condemn King but said his rhetoric was "disappointing" and  "pulling us apart." Cruz's campaign spokeswoman, Catherine Frazier, disputes King's characterization, saying that Cruz "told [King] the same thing he said to reporters today."

Whether or not Cruz was friendlier to King in private than in public, the fact that remains clear is that Cruz is unwilling to fully condemn a white nationalist — which is particularly troubling from a senator representing a state where Hispanics and racial minorities make up 55 percent of the population.

King, who represents Iowa's 4th Congressional District, has always had a history of white supremacist rhetoric. But he is facing a fresh wave of outrage after giving a racist, anti-Semitic interview to an Austrian far-right party with historic ties to the Nazis — while on a European tour sponsored by a Holocaust awareness organization. In the interview, King suggested nonwhite migrants were being paid by Jewish financier George Soros to flood the West and displace white people — a conspiracy theory very similar to the beliefs of the neo-Nazi gunman who murdered 11 worshippers at the Tree of Life Synagogue in Pittsburgh last Saturday.

In the wake of the controversy, several companies that have funded King's campaign have cut ties with him, and even the National Republican Congressional Committee (NRCC) chair, Rep. Steve Stivers (R-OH), has forcefully condemned him.

But Cruz's hesitance to fully distance himself from King is unsurprising, as the two have a political friendship. King was an early endorser and national co-chair of Cruz's 2016 campaign for president, and the two share some fringe political beliefs, including that parts of the 14th Amendment should be abolished, and that certain crimes should be punishable by loss of citizenship.

Both Cruz and King are up for re-election next week, with Cruz facing a well-publicized grassroots challenge from El Paso Rep. Beto O'Rourke, and King facing former Sioux City professional baseball player J.D. Scholten. While both Republicans are favored to win re-election, recent polls have shown their races tightening to within the margin of error.