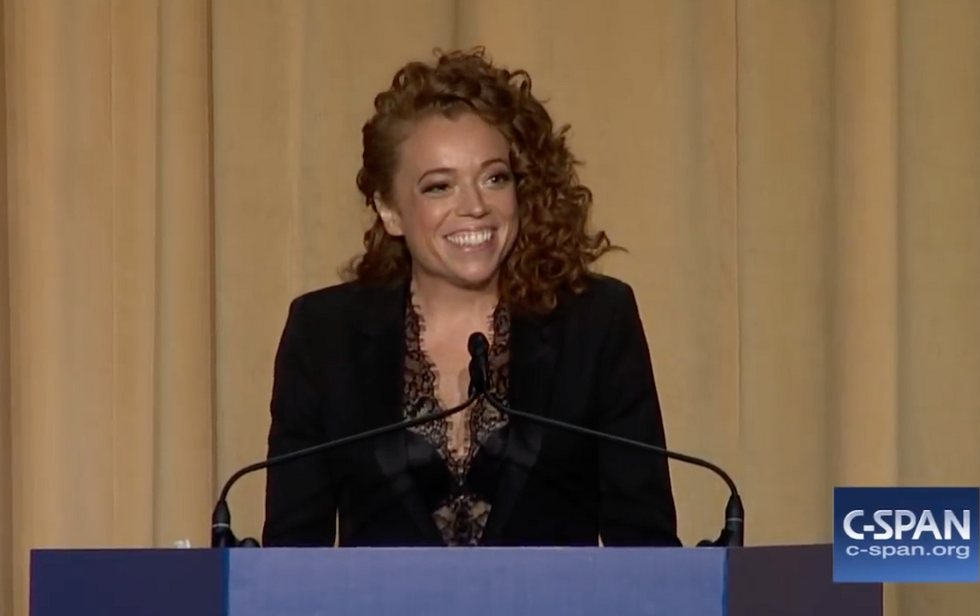 One of them is Michelle Wolf, who was featured at the 2018 White House Correspondents Dinner and had some laughs at the expense of White House Press Secretary Sarah Huckabee Sanders—inspiring a lot of whiny faux-outrage from Trumpistas.

Visiting Twitter on November 19, Wolf posted, “The @whca are cowards. The media is complicit. And I couldn’t be prouder.”

“Daily Show” correspondent Roy Wood, Jr. was equally outspoken about the decision, telling The Daily Beast it was a “sad day for jokes. I would call the people who made this decision a bunch of snowflakes, but then, we’d just be called snowflakes for calling them snowflakes.”

Over the years, the White House Correspondents Dinner has had some memorable comic moments. At the 1976 event, the guest comedian was Chevy Chase—who had been lampooning President Gerald R. Ford mercilessly on NBC’s “Saturday Night Live.” But Ford had a sense of humor about it, and his ability to laugh at the joke along with Chase spoke well of him. And Dana Carvey’s hilarious impression of President George H.W. Bush on “SNL” even led to the two of them becoming friends and appearing together at the event.

Some of the event’s edgiest moments at a White House Correspondents Dinner came in 2009, when guest comedian Wanda Sykes tore Rush Limbaugh to pieces for his assertion that he hoped Barack Obama would fail as president. Sykes joked that Limbaugh’s comments were so unpatriotic that he might have been 9/11’s “20th hijacker.”

In addition to the right-wing faux-outrage over Wolf, a factor in the WHCA’s decision to not hire a comedian for 2019 might have been President Donald Trump’s indignation over Alec Baldwin’s impressions of him on “Saturday Night Live.” Trump is the first U.S. president to be openly angry about being lampooned on the long-running sketch comedy show.

W. Kamau Bell (host of CNN’s “United Shades of America”) has also spoken out about the WHCA’s decision to not feature a comedian in 2019. On November 19, Bell tweeted, “After the way the WHCA & many journalists talked about Michelle Wolf, it was official that no comedian worth a damn would take this gig.”