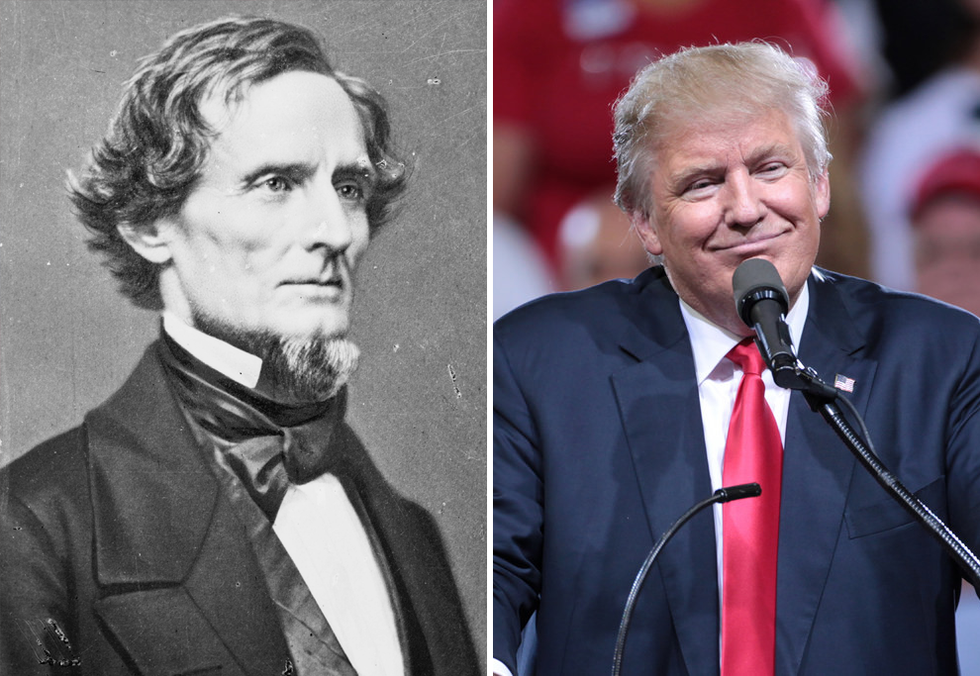 In 1861, they were cadets from the Citadel Military Academy in South Carolina. On January 9, of that year, they were manning an artillery battery on Morris Island, an uninhabited island in Charleston Harbor when they fired on the United States steamship Star of the West, which was attempting to resupply the American garrison at Fort Sumter. The shots they fired that day, along with the bombardment of the fort by the Confederate States Army beginning on April 12 of that year, are generally considered by historians to be the first shots fired in what became the American Civil War.

In 2017, they were members of the so-called “alt-right” — white supremacists, neo-nazis, neo-confederates, white nationalists, and neo-fascists who were in Charlottesville for the so-called “Unite the Right” rally. On the night of August 11, 2017, as many as 200 of them marched carrying burning torches through the campus of the University of Virginia chanting white supremacist slogans such as “blood and soil” and “Jews will not replace us.” When they reached the statue of Thomas Jefferson, founder of the University of Virginia, they clashed with a group of students who had surrounded the statue. The alt-right demonstrators swung and threw their torches and used pepper spray against the counter-protestors, injuring several.

The next day, the alt-right demonstrators marched through Charlottesville carrying Confederate and Nazi flags chanting “white lives matter,” “Jewish media is going down,” and “make America great again.” Many demonstrators were armed, some with semi-automatic assault-style rifles. They clashed again with counter-protestors, and at 1:45 p.m., a white supremacist demonstrator identified as James Alex Fields Jr. drove his 2010 Dodge Challenger into a crowd of counter-protestors, injuring 19 and killing 32-year-old Heather Heyer.

She was not the first to die in the new civil war. Already dead were black churchgoers in Charleston, South Carolina; a native of India in Olathe, Kansas; an Army lieutenant in College Park, Maryland; and many others.

But the death of Heather Heyer would become a focus of the violence and killing in the new civil war, because President Trump would put it there.

Later the day she died, President Trump went before the cameras at his golf club in Bedminster, New Jersey, and said, "We all must be united and condemn all that hate stands for. There is no place for this kind of violence in America. Let's come together as one!" Responding to a question, he went on to say, "we condemn in the strongest possible terms this egregious display of hatred, bigotry and violence on many sides, on many sides." He was roundly criticized that day and the next for blaming the violence that caused multiple injuries and the death of Heather Heyer on “many sides.”

Responding to the criticism three days later, Trump addressed the media at Trump Tower and repeated his claim that there was “blame on both sides.” Responding to another question, Trump asserted, "Not all of those people were neo-Nazis, believe me. Not all of those people were white supremacists by any stretch.” He went on to criticize the movement to take down Confederate statues as “an attempt to change history,” and criticized “the very, very violent alt-left.” He went on to defend the protest by the alt-right in Charlottesville by saying “there were very fine people on both sides.”

In an interview the next day, Steve Bannon, who was then serving in the White House as Trump’s Chief Strategist, called Trump’s press conference the previous day “a defining moment” in Trump’s presidency because Trump had chosen “his people” over “globalists.”

Like a blind squirrel who found an acorn, Steve Bannon was right that Trump’s remarks after Charlottesville were a defining moment in his presidency. Trump had taken the side of “his people” when he told the world there were “very fine people on both sides,” and said “they” were taking away  “our” culture and history.

It was crystal clear who “our” refers to, crystal clear why Trump felt compelled to note that “not all” of the demonstrators in Charlottesville were “neo-Nazis” and “white supremacists.” He stood with those defending the celebration of the Confederacy with statues of Confederate generals like Robert E. Lee and Stonewall Jackson. ”Our” people are white people.

The New York Times created a stunning portrait of the new civil war on the cover of its Sunday magazine on November 11. Against a photograph of a burning Nazi swastika at a white supremacist rally in Georgia this year, the Times displayed a list of 70 white supremacist demonstrations, shootings, bombings, and planned attacks going back to the killing of nine African Americans at the Emanuel African Methodist Episcopal Church in Charleston, South Carolina by white supremacist Dylann Roof on June 17, 2015. The Times used the list to illustrate an article about how federal and state law enforcement agencies have failed to respond to the threat of white supremacist violence in this country. Read another way, it’s a list of battles in the new civil war.

On January 28, 2017, a mosque in Victoria, Texas was burned down by Marq Vincent Perez, who was later convicted of arson in the commission of a hate crime, among other charges.

On February 4, 2017, there was a white supremacist rally by Identity Evropa in New York’s Times Square.

On May 20, 2017, 23-year-old United States Army Second Lieutenant Richard Collins III was stabbed to death in a hate crime by 22 year-old-Sean Urbanski, a member of a white supremacist Facebook group known as “Alt-Reich: Nation.” Second Lieutenant Collins was black. Urbanski is white.

On May 21, 2017, the white supremacist East Coast Knights conducted a ceremonial cross-burning in Quarryville, Pennsylvania.

On January 2, 2018, 19-year-old Blaze Bernstein was killed in a park in Lake Forest, California. Twenty-one year old Samuel Woodward has been charged with the killing as a hate crime. Racist, anti-Semitic, homophobic and misogynistic materials were found in Woodward’s social media accounts. Bernstein was Jewish and out as a gay man. The two had attended the same high school and knew each other.

On January 27, 2018, there was a League of the South rally in Tallahassee, Florida.

On March 17, 2018, there was another League of the South rally in Knoxville, Tennessee.

On April 7, 2018, there was a League of the South roadside demonstration in Wetumpka, Alabama.

On May 19, 2018, there was a League of the South demonstration in Berry, Alabama.

On September 29, 2018, there was a League of the South demonstration in Newport, Tennessee.

The League of the South is a white supremacist, neo-Confederate organization headquartered in Killen, Alabama. Designated by the Southern Poverty Law Center as a hate group, the League of the South has stated its goal is a “free and independent Southern republic” comprised of the former states of the Confederacy, ruled by white men.

Also on October 13, 2018, there was a “Law and Order March” by the Patriot Prayer group in Portland, Oregon. Far right groups such as the Proud Boys have allied themselves with Patriot Prayer and attended their rallies.

On October 25, 2018, a white gunman shot and killed two black patrons of a Kroger supermarket in Jeffersontown, Kentucky. Gregory Bush, 51, has been charged with three counts of federal hate crimes and two state counts of murder and ten counts of wanton endangerment. The shooter is a suspected white supremacist who shouted out “whites don’t kill whites” as he gunned down the two Kroger shoppers.

On October 27, 2018, 46-year-old Robert Gregory Bowers walked into the Tree of Life Synagogue in Pittsburgh, Pennsylvania and shot to death 11 people and wounded six more. The gunman shouted “all Jews must die” during the attack. He is a suspected white supremacist and anti-Semite who has posted pro-Nazi material on internet websites.

Over a period of several days in October of this year, Trump supporter Cesar Sayoc allegedly sent at least 14 mail bombs to a total of 12 prominent Democratic critics of President Trump, including former President Barack Obama, presidential candidate Hillary Clinton, former Vice President Joe Biden, Congresswoman Maxine Waters, and Senator Kamala Harris. Sayoc had been living in a van covered with pro-Trump and anti-Democrat stickers, including several with photos of prominent Democrats such as Hillary Clinton with the crosshairs of a rifle sight superimposed on them.

That is only a partial list of the killings and other incidents carried out by members of the “alt-right” and white supremacists. It happens day by day, week, by week, month by month, one after another.

It’s a slow motion civil war, and it’s being fought by Trump’s “very fine people.” The warriors in this civil war include a lot of people who are fighting against what might be called a pluralistic United States. Many of them have guns. Some of them have bombs. Some of them have killed the people they are at war with. Others have held repeated rallies and demonstrations to express their dissatisfaction with the United States as it is presently comprised. Many want a separate state of white people, ruled by white people. They want a new Confederate States of America.

This weekend, Trump will travel to California, which is not one of the states in Trump’s confederacy. It’s a state he dismisses for its “sanctuary” cities and for its high taxes and its liberal political leadership and for is “mismanagement” of its forests, which he claims cause the fires that have destroyed the places he will presumably visit. To prepare for the visit by Trump, the citizens of California might consult the citizens of Puerto Rico, another place Trump doesn’t consider part of his confederacy, which he visited after a natural disaster.  He might even toss them some paper towels.