Semper WTF? Trump tells FOX News that he only supports the military when they bow down to him 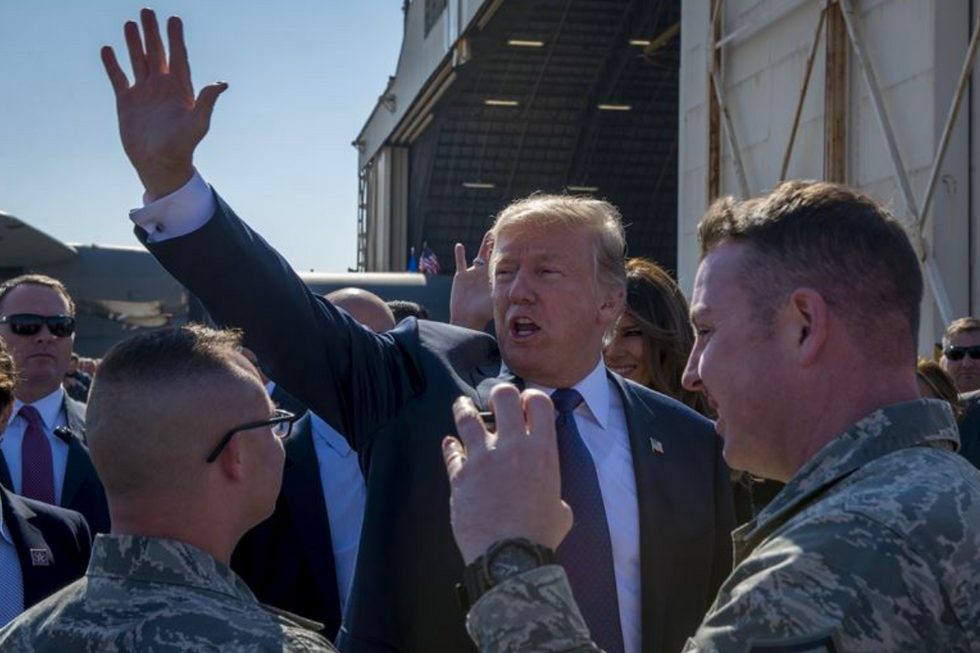 This has been a busy Sunday for Donald Trump. When he wasn't posting flagrant propaganda videos of himself disrespecting California fire victims, he was excitedly planted in front of his television so that he could fire off rapid responses to the insolence directed at him by those pesky Democrats and wayward Republicans. So naturally he lashed out the imaginary "caravan" of criminal invaders marching toward the U.S. border. He posted an infantile tweet that referred to Rep. Adam Schiff and Adam "Schitt." And he promoted his latest appearance on State TV (aka Fox News) with Chris Wallace.

There was a lot of blathering idiocy throughout the interview, and it can be viewed in conveniently sectioned off pieces here. But one area of particular interest was when Wallace sought Trump's reaction to remarks made by retired Admiral William McRaven. Trump twice interrupted Wallace as he tried to ask the question regarding McRaven saying that Trump's attacks on the press are "the greatest threat to democracy in my lifetime." Eventually Wallace got the question out and it resulted in this disturbing exchange (video below):

Wallace: Bill McRaven. Retired admiral. Thirty-seven years. Former head of Special Operations...
Trump: Hillary Clinton fan.
Wallace: Special operations...
Trump: Excuse me. Hillary Clinton fan.
Wallace: ...who led the operations, commanded the operations that took down Saddam Hussein and that killed Osama bin Laden, says that your sentiment is the greatest threat to democracy in his lifetime.
Trump: Okay. He's a Hillary Clinton backer and an Obama backer. And frankly, wouldn't it have been nice if we got Osama bin Laden a lot sooner than that?

Holy Shiitake Mushrooms. Trump actually has the gall to disparage a Navy Seal with more than three decades of service to his country, and whose leadership helped bring down two of America's most virulent foes. And Trump's reason for slamming McRaven was that he allegedly supported a couple of Democrats (aka Americans). What's more, Trump's insult went off the deep end by belittling McRaven's accomplishments because they hadn't happened sooner. For the record, George W. Bush had eight years to deal with bin Laden. Under Obama, bin Laden was dead in two years. And that was while Obama was also dealing with Bush's Great Recession. Trump, on the other hand, evaded military service entirely via five questionable deferments. He has no moral standing to criticize McRaven, Obama, Clinton, or anyone else.

It's also worth noting that Trump is lying again. McRaven was not a supporter of Clinton or Obama. He never endorsed either and he served presidents of both parties. However, he was on the Trump transition team's short list for a top national security post. Which makes his slander all the more repulsive.

This ought to be a wake up call for every member of the military, every veteran, and every American who supports them, that Trump has zero respect for their service or commitment to duty. Unless, that is, they are also slavishly adoring of him personally. Anyone who demonstrates independent thought or otherwise veers from total devotion to Trump is discarded and treated like traitors no matter how impressive or patriotic their past. Trump will turn on you if you fail to worship him sufficiently. And that's not patriotism, it's malignant narcissism with tyrannical tendencies.