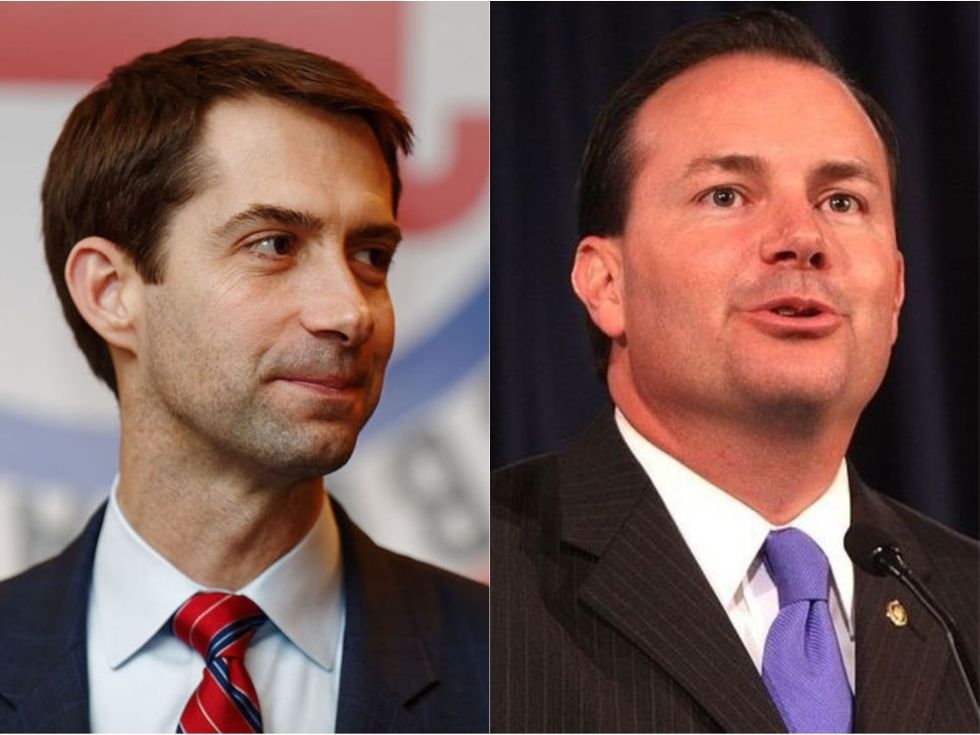 Lies are the currency of the American right wing, so ubiquitous in politics and media that many have dubbed the phenomenon a "post-truth" crisis.

So it was genuinely surprising Monday when Sen. Mike Lee (R-UT) — himself a hard-line member of the conservative movement and is in many ways a radical figure in his own right — called out a member of his own party for spreading fake news. His denunciation of Sen. Tom Cotton (R-AR) came in response to tweet thread about the pending criminal justice reform bill in the Senate, which is spurring divisions among members of the Republican caucus.

In his own tweet about the bill over the weekend, Cotton had spread fears about the bill, saying "it gives early release to 'low level, nonviolent' criminals like those convicted of assaulting police, even with deadly weapons," and to "criminals who steal passports & immigration docs from aliens who have been trafficked to keep them in captivity." He also said there have been no hearings on the bill.

"I highly respect my colleague from Arkansas but everything in his tweet and this thread is 100% Fake News," Lee said in response to Cotton's tweets.

What the First Step Act does do is encourage rehabilitation by incentivizing inmates to participate in recidivism r… https://t.co/vo0Ekqhjh9
— Mike Lee (@Mike Lee)1542659100.0

If @SenTomCotton has good faith problems with this bill then he should welcome a full and open debate on the Senate… https://t.co/l3djXCWJr7
— Mike Lee (@Mike Lee)1542659129.0

It was a stern rebuke to the Cotton, who has a long history of false statements and blatant lies. Cotton is also one of the most anti-immigrant members of Congress and has preposterously suggested that the United States has "under-incarceration" problem. In light of the fact that the United States has one of the largest incarcerated populations per capita in the world, and given the vast racial disparities that plague the system, it's unreasonable to interpret his views as driven by anything other than deep-seated racism.