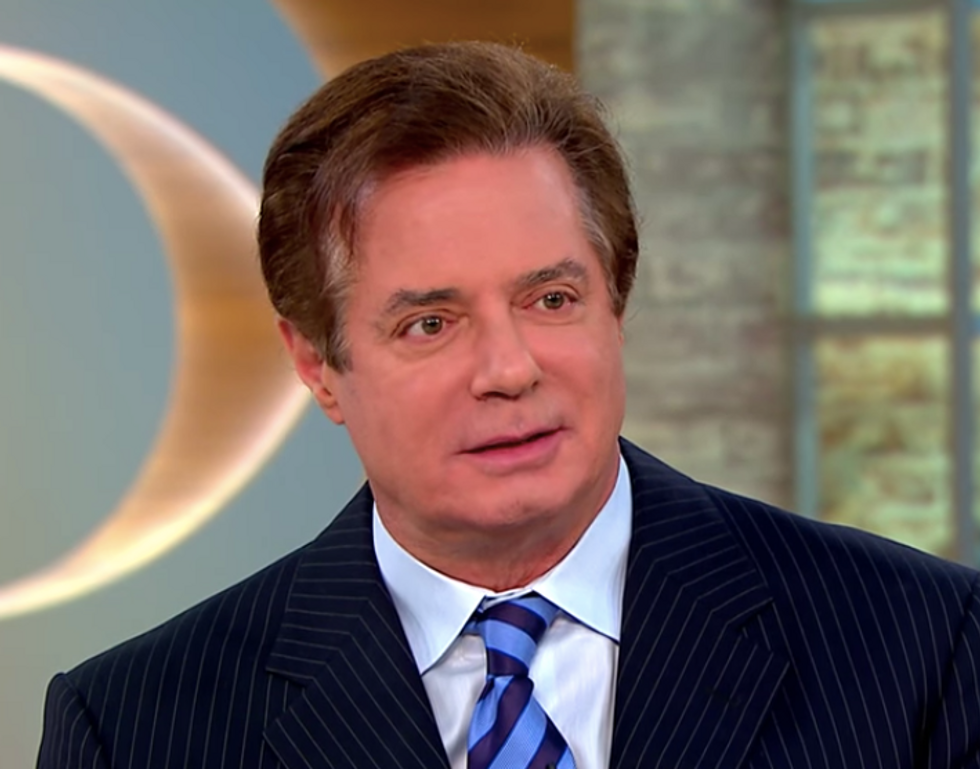 With the dissolution of Paul Manafort's plea deal this week, the former Trump campaign chairman's role in special counsel Robert Mueller's Russia investigation had been once again been thrown into doubt.

It's not clear, for instance, if Mueller's accusation that Manafort has been lying to the investigators marks a devastating blow for the probe or if it's a sign that the former campaign chairman has made a serious mistake.

But Marcy Wheeler, one of most astute Mueller watchers who once provided as yet undisclosed information to the FBI about the investigation, argued compellingly that Manafort has been acting as a mole within the investigation for President Donald Trump. Even more intriguingly, though, she believes Mueller knew this and may have used Manafort against the president.

The only sane reason, she claimed in a new blog post, that Manafort would lie to Mueller even after taking a plea deal, is that he's banking on a pardon from Trump, which would, in any case, cover only federal and not state crimes.

"Just about the only explanation for Manafort’s actions are that — as I suggested — Trump was happy to have Manafort serve as a mole in Mueller’s investigation," she wrote.

If this is right, it could be devastating for Trump. He finally turned in his answers to the special counsel's investigation last week — and he may have relied on Manafort's "insider knowledge."

"But Mueller’s team appears to have no doubt that Manafort was lying to them," Wheeler explained. "That means they didn’t really need his testimony, at all. It also means they had no need to keep secrets — they could keep giving Manafort the impression that he was pulling a fast one over the prosecutors, all while reporting misleading information to Trump that he could use to fill out his open book test. Which increases the likelihood that Trump just submitted sworn answers to those questions full of lies."

There are several reasons Wheeler's argument is compelling. First, as she previously noted, Manafort's plea agreement did not include a provision to limit him from speaking with outside parties about the investigations, even though Rick Gates, Manafort's deputy who also pleaded guilty in the probe, was forced to agree to such a provision. For some reason, Mueller wasn't worried about Manafort's lawyers communicating with Trump — which he has been doing.

At the same time, while Manafort's agreement allowed him to speak to outside parties about the probe, it set a relatively low bar for the special counsel to demonstrate that the former campaign chair had broken the agreement. While Gates' agreement required that prosecutors show that the preponderance of evidence suggests that he lied in order to overturn the deal, Manafort's agreement only requires that prosecutors show that he has violated the agreement by "good faith," a lower standard.

"They probably never really believed he was going to cooperate," Wheeler said.

There's another piece of evidence that Manafort was serving as a mole for Trump by becoming a cooperating witness.

On Nov. 15, Trump tweeted: "The inner workings of the Mueller investigation are a total mess. They have found no collusion and have gone absolutely nuts. They are screaming and shouting at people, horribly threatening them to come up with the answers they want."

As many pointed out at the time, this suggested Trump had some new insight into the investigation that he previously lacked. Some speculated that Trump's dubiously appointed Acting Attorney General Matthew Whitaker might have been the source, but Manafort could also have played this role.

A few days before that, ABC News had reported that there were "tensions" between Mueller and Manafort as investigators struggled to get the answers they wanted from him. As I reported at the time, this was most likely a leaked report from Manafort's allies. It appeared to be an attempt to make the investigators look desperate. In fact, the Mueller team might have been intentionally playing Manafort.

Wheeler also argued that the upcoming presentation of evidence that Manafort lied could be a key moment for the Russia investigation — it may be the much anticipated "report." The special counsel intends to submit a "sentencing submission" regarding Manafort to the court that "sets forth the nature of the defendant's crimes and lies."

If this submission is made public, it could be revelatory. By demonstrating that Manafort lied as part of his sentencing agreement, Mueller could answer any number of outstanding questions regarding the 2016 election, the Trump campaign and Russia — and potentially implicate even Trump, who may not be otherwise indictable.

It's an open question whether, if Wheeler's theory is right, there was an explicit deal that Manafort would act as a mole in exchange for a pardon. It's possible the scenario could have emerged somewhat organically as an alignment of interests, rather than a spelled-out quid pro quo. But many observers have noted that Manafort's moves seem exceptionally risky without a pardon guarantee (and even then, nothing is for sure). And if Trump made such an explicit promise, it would clearly be an impeachable offense.