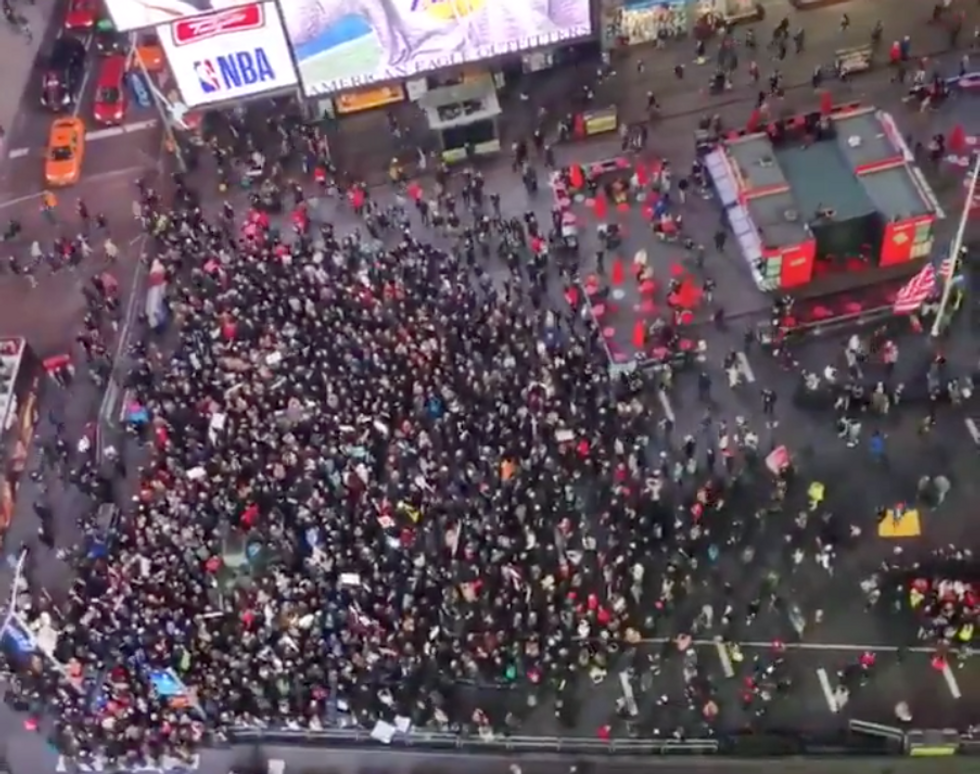 As soon as Matthew Whitaker, who had been Sessions' chief of staff, was appointed to the position in violation of the traditional line of succession, observers immediately cried foul. There was no clear reason to replace Sessions with Whitaker unless the sole purpose was to install a crony at the head of the investigation, which Trump clearly feels threatened by.

And if anyone is a crony, Whitaker surely fits the bill.

He's made numerous controversial or wrong public claims about the Russia investigation demonstrating his antipathy toward the probe. He seems to share Trump's delusional view that is a "witch hunt." rather than a legitimate operation directed to uncover key national security issues.

In response to this move, many Americans felt compelled to make their voices heard. In New York City, a large crowd gathered in Times Square to protest the appointment of Whitaker:

Protesters chanted "Trump is not above the law," according to journalist Karen Rubin.

Other protests erupted in Boston, Philadelphia, Sacramento, Chicago, Tampa, Rockville, and Kansas City, among others.

In Washington, D.C., protesters gather near the White House — taking their message right to the president's doorstep. Walter Shaub, the former director of the Office of Government Ethics who resigned in protest under Trump, spoke at the demonstration.

“We are in an ethics crisis," he said. "You can't be your own investigator. Trump is not above the law.”

He also noted: “Whitaker isn’t even slightly qualified. People have called him a cartoon character. I think that’s an insult to cartoons.”

Holy moly. The crowd outside the White House for this #ProtectMueller event is ENORMOUS. This is happening all over… https://t.co/xudAPkPW4r
— Ezra Levin (@Ezra Levin) 1541716347.0