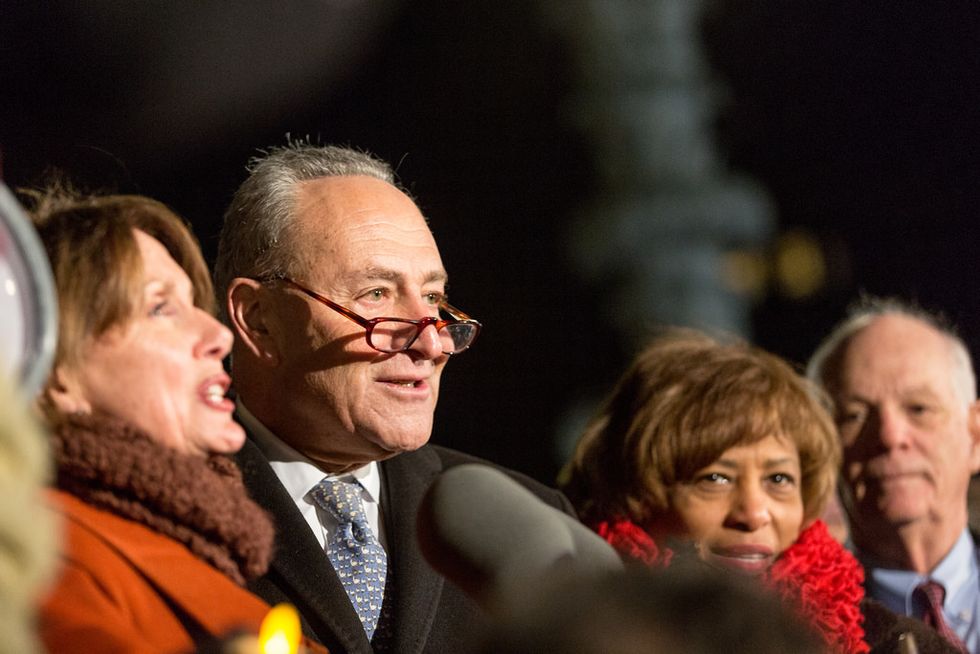 With the brutal consequences of President Donald Trump's anti-immigrant agenda on full display after U.S. Border Patrol fired tear gas at asylum seekers in Mexico, Senate Minority Leader Chuck Schumer (D-N.Y.) sparked fury from progressives and immigrant rights groups on Tuesday by telling reporters that he is perfectly willing to cede ground to the president's xenophobic policies and offer up $1.6 billion for "border security" funding in upcoming budget talks.

"We are for strong border security," Schumer declared when asked about Trump's request for $5 billion in border wall funding.

When asked if he would be willing to go higher than $1.6 billion, Schumer dodged the question, saying he doesn't want to negotiate through the media.

While Schumer's office clarified that the $1.6 billion in funding he supports would not be for Trump's racist border wall but rather for non-concrete "fencing" and other ill-defined "border security" initiatives, critics expressed dismay that the top Senate Democrat is offering any funding for the president's anti-immigrant agenda, particularly after the GOP was repudiated in the midterm elections.

"Did every mainstream Democrat suddenly decide it's time to offer a 'kinder, gentler' anti-immigration message? And do they think that 'fences' are more humane than walls?" asked Richard Eskow, senior advisor for health and economic justice at Social Security Works and host of "The Zero Hour."

"They must, since so many voted for border fencing in 2006," Eskow continued. "No fences. No walls. Support all asylum seekers."

Make no mistake: this is political cowardice. We don't need a dime for a wall, a fence, a ping-pong net partition, none of it.

We need Democratic leadership who are going to have a goddamn backbone and reject this racist ideology. https://t.co/yH6Gw3vLWP

schumer making a point to clarify that the 1.6 billion was not for a wall but for OTHER types of border security that he never actually had to agree to in the first place https://t.co/Mg2LNem1bt

Schumer, who was easily reelected as Senate Democratic leader earlier this month, has faced almost constant ire from the progressive grassroots in recent months as he has allowed over a dozen of Trump's right-wing judges to sail through the Senate with no resistance while getting almost nothing in return—aside from a bit more time to campaign.

After Schumer expressed his willingness to hand Trump nearly $2 billion for border security as the president continues to separate families at the border works to strip away asylum rights, progressives argued that this is just the latest reason Senate Democrats desperately need a new leader.

Tell me why we’re not having conversations about who is replacing Schumer as Senate Minority Leader? https://t.co/iwaFDwXIpM