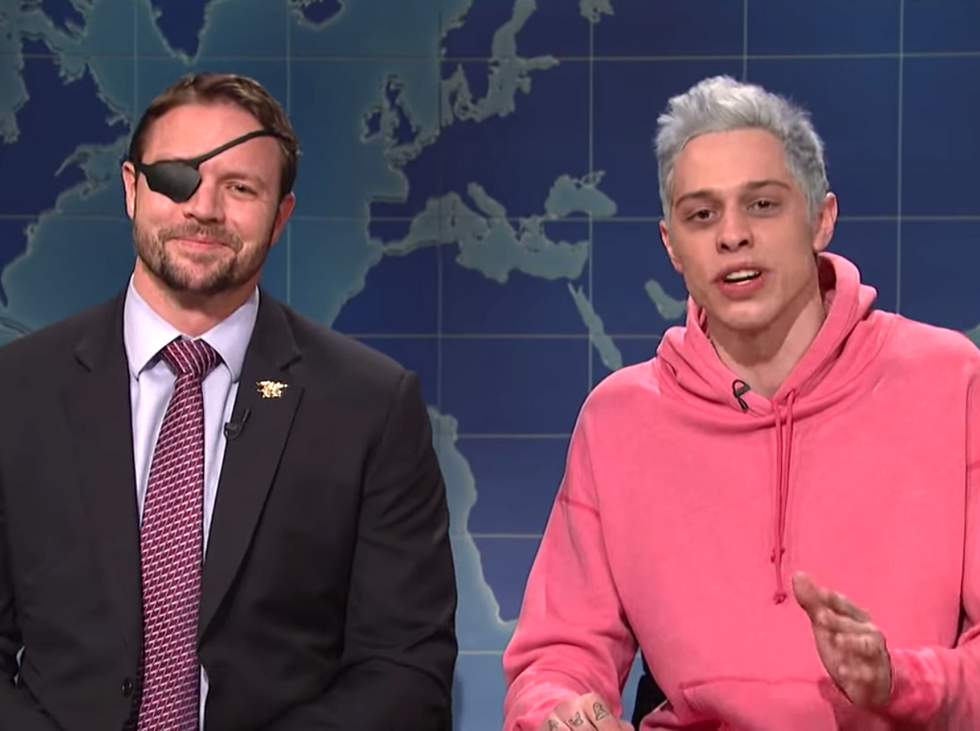 The National Republican Congression Committee condemned the joke, saying: "Pete Davidson and NBC should immediately apologize to Dan, and to the millions of veterans and military families who tune in every weekend — because they're not laughing." Fox News' Laura Ingraham lashed out, saying of Davidson on Twitter: "How long do you think this 'comic' & the writer responsible for this disgrace would last in @us_navyseals training?"

It wasn't just Crenshaw's Republican allies who were upset about the tasteless joke. Sen. Tammy Duckworth (D-IL), herself a veteran with physical disabilities, called the joke "absolutely appalling."

While Davidson's joke was obviously over the line — and indeed, he apologized for it in a segment with Crenshaw over the following weekend — there's an obvious hypocrisy for conservatives like Ingraham and her ilk to decry the joke. When such jokes target people of color or LGBTQ people, the complainants are told they have to learn to take a joke. Such complaints are decried as egregious political correctness.

At the same time, of course, their commitment to enforcing certain norms of respect even regarding veterans is not absolute. We know this because President Donald Trump famously insulted the late Sen. John McCain (R-AZ), a Vietnam war veteran who spent five years as a prisoner of war.

"He's not a war hero," Trump said of McCain. "He's a war hero because he was captured. I like people that weren't captured."

It was a much more egregious insult than what Davidson's joke, and it came from a presidential candidate, not a late-night comedian. But Trump never apologized, even while his extreme right-wing fans only embraced him more fiercely. In fact, he continued to insult McCain over the years. And when McCain died this year, Trump fueled a week of outrage by refusing to initially ask for the flag to be lowered in the senator's honor. Separate from McCain, Trump and his allies attacked a Gold Star family that spoke at the 2016 Democratic National Committee and sparked a needless feud with Myeisha Johnson, a Gold Star widow, while in office after rudely discussing her husband's death.

So conservatives fail to hold their own leaders and allies to account when it's not convenient to do so. But the hypocrisy is even worse than that, because they reject the very idea of "political correctness" when it comes to claims for respect made by progressives.

In fact, the election of Trump was supposedly a repudiation of a "PC culture" that was out of control on the left. Activists who objected to misogynistic jokes, casual forms of racism, persistent homophobia, and the stigmatization of mental illness were getting their comeuppance in the form of a man who could eschew every norm.

Some norms, though, work to his advantage. Trump has frequently demonized NFL players who kneel during the national anthem — which is a quintessential example of trying to enforce a certain form of "political correctness." He asserts that we've become "too politically correct" with regard to our treatment of criminals and undocumented immigrants, but he also reacts with moral indignation and alarm when anyone insults the police or implies that law enforcement doesn't always have the people's best interests at heart (unless that law enforcement works for the FBI, which is investigating his campaign).

When it comes to an incident such as Davidson's insult of Crenshaw, few commentators refer to the backlash as a form of political correctness, because almost everyone agrees that what Davidson said was inappropriate. And conservatives have somehow convinced most commentators, including some with strong liberal leanings, that "political correctness" is something that only occurs on the left — even when the right wing tries just as hard to enforce its norms of respect and etiquette on everyone else.

The truth is that there's nothing wrong with engaging in disputes about which jokes cross the line, what terms are respectful to use when referring to certain groups, and how rhetoric can disrespect people of certain identities. But when liberals make these types of arguments, conservatives declare them fundamentally illegitimate, akin to policing thought, or an effort to literally destroy America. When conservatives make these kinds of claims and try to enforce their own norms of political correctness, on the other hand, liberals listen.