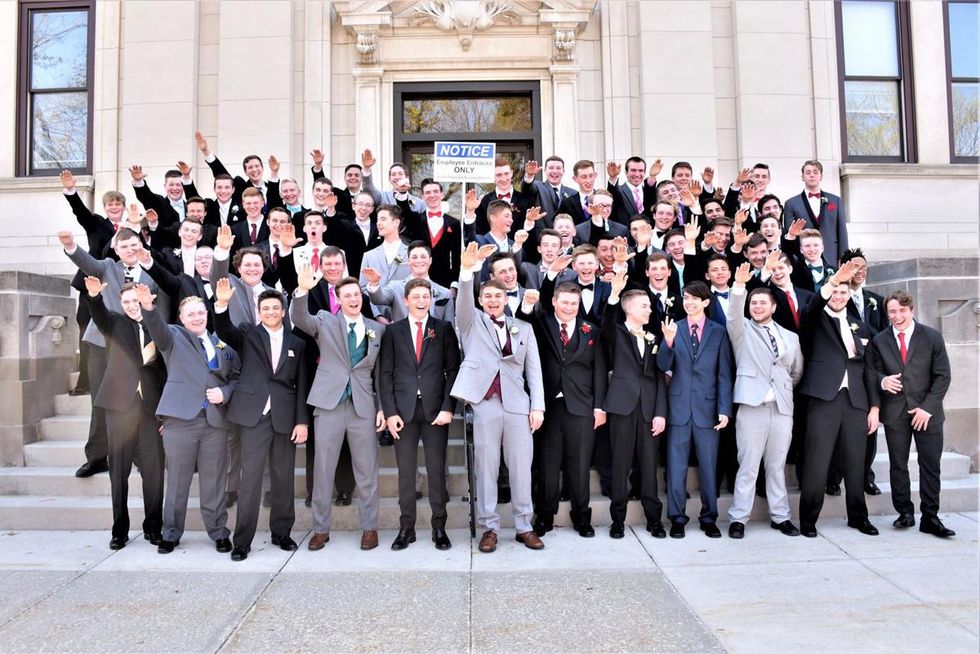 The photographer behind an image (above) showing Wisconsin teenaged boys from Baraboo High School giving a Nazi salute is insisting he merely told the boys to "wave."

"I said to them, 'OK, boys, you're going to say goodbye to your parents, so wave," photographer Peter Gust says, in this clip from "Good Morning America."

"At the time I took the picture, there are all different stages of waving goodbye," he said.

That is not what the photo, which, until Monday had been on his website for sale for months, appears to show. Gust is a parent to a Baraboo High School student.

Gust claims, “I didn’t tell them to salute anything.”

One teenaged boy who clearly was refusing to participate in the Nazi salute tells a different story.

Jordan Blue, in a blue tuxedo and red bow tie in the upper right portion of the photo told Madison 365, Gust "didn't" tell students to wave goodbye to their parents.

"Blue said Gust only told the group to raise one hand for a photo," the local news site reports.

"I felt upset, unsafe, disappointed and scared," Blue says. "I felt unsafe because I go to school with them, I don’t believe in what they represented and the symbol they shared … they knew it was wrong, but they still did it."

Jules Suzdaltsev, a contributor to VICE News and The Young Turks, was the first to speak with Blue.

"The photo was taken during our Junior Prom photos. I clearly am uncomfortable with what was happening," Blue told Suzdaltsev in a written statement. "I couldn’t leave the photo as it was taken within 5 seconds. The photographer took the photos telling us to make the sign, I knew what my morals were and it was not to salute something I firmly didn’t believe in."

Blue adds, "I attend BHS, these classmates have bullied me since entering middle school, and I have struggled with it my entire life and nothing has changed. These are the boys of Class of 2019, nothing has been done and my question is, [will] anything ever be done. I truly & firmly believe we need to make a change to this horrible act, it needs to stop. Bullying, immaturity, and just taking things as a joke."

Suzdaltsev says he has now talked with about 100 students and parents of Baraboo High School. On his Twitter page he has posted some of their comments. He sums them up here:

But nearly all of the stories echo the same basic theme: the community as a whole has a lot of casual & jokey racis… https://t.co/YGifRrhdhF
— Jules Suzdaltsev (@Jules Suzdaltsev) 1542067940.0