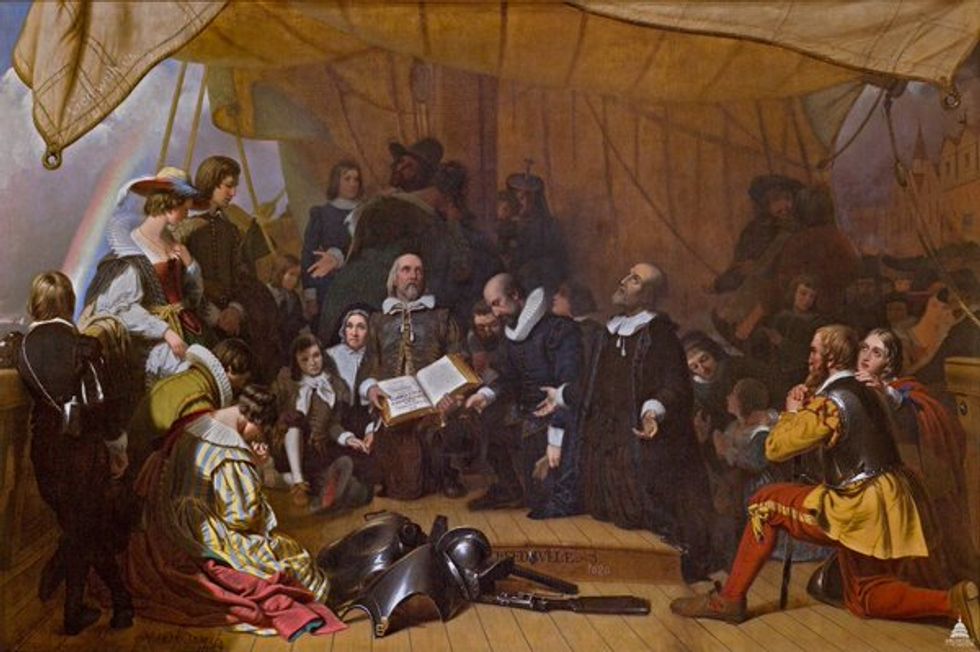 We have two holidays celebrating the birth of America. There’s summer’s communal holiday. Brass bands play patriotic songs from gazebos in the town parks. Mayors on squeaky PA systems repeat the words proclaimed by a free people on that first historic Fourth of July. We waited for the long summer day to end, and then we leaned back on our picnic blankets and oooo-ed and ahhhhh-ed at the jubilant reds and whites and blues tossed below the stars.

Now autumn looms. If this season’s holiday—Thanksgiving—is less jubilant than the 4th, it’s more profound. Harvest colors lead us into deeper meditations on the meaning of America.

It is a latter-day Exodus: flight from oppression, wandering in the wilderness, entrance into the Promised Land.

The Puritans thought of America like that. They made a bargain with God: hardship might buffet them, luxury might tempt them, but they promised to stay true to their faith. In return, God would deliver them. He would (as John Winthrop put it) keep their ship from wrecking on the rocks. Stepping ashore at Plymouth Rock and Salem, grateful and righteous, they took possession of the Promised Land.

Trials, temptations, fidelity, reward: they’re the essence of Exodus, what we might call its deep narrative structure.

I have to admit, this land is so astonishingly abundant—from the fertile soil of the plains, the teeming fish of New England, Texas oil, desert sunshine, Wisconsin cows, Pittsburgh steel, Kentucky pasture, the sun-kissed grapevines of California—it’s a little hard not to think of ourselves as the recipients of some special blessing. It’s tempting to think we are God’s chosen people.

Every exodus is followed by Jeremiah. Children and grandchildren drift, as they always do, from their fathers’ creed. They break faith, and then some angry prophet will harangue them.

Sacvan Bercovitch, the brilliant scholar of American literature, figured this out exactly forty years ago. Always, he told us, someone will rise up to preach the old ways. We must purify the nation, the prophet says, to make it great again.

The first American jeremiad came from the very man who told us about the Pilgrim’s exodus. Twenty years after Plymouth Rock, William Bradford whined about the second and third generation of settlers. They were not pure enough. The city shining on the hill had dulled. The children and grandchildren were losing interest in hunting down witches and cast out dissenters. They did not cleave with zeal to the leaden life.

Donald Trump is only the latest haranguer. His rallies and speeches and Twitter rants and baseball caps follow Bercovitch’s prediction. Admittedly, Trump differs from the Pilgrim moralist in superficial ways. Pride, avarice, lust, gluttony, most of the deadly sins flourish openly in his heart. Deeper down, in the spleen I guess, Trump is a Puritan. He dresses in righteousness and demands obedience, purity, exclusion. Dissent is outlawed. Truth is exiled.

Bercovitch was wrong about one thing. Jeremiahs are not inevitable. And though they’re pretty common to New England, they’re not particularly American. We ought to break the cycle. We can break the cycle. But we have to give up our cherished myth of Exodus.

An alternative is near at hand.

Voyagers make no bargain with God. The ship wrecks upon the rocks. The survivors are hurled into the sea. They drift. Saltwater dissolves the ties that bound them to their old life and ways. They climb the sand. Marooned on a deserted shore, equipped with the salvage of the wreck and their own resources, they face a wilderness. Shock, immersion, salvage: that’s the deep structure of these stories.

As it happens, America has a shipwreck that rivals the Pilgrim’s story. Actually, for adventure, excitement, dangers, heroes and villains, it blows the Pilgrims out of the water.

Ten years before the Mayflower, the Virginia-bound ship Sea Venture sailed into a hurricane. A hundred fifty souls were marooned in Bermuda. Forty years before Thomas Hobbes wrote Leviathan and eighty years before John Locke’s Two Treatises of Government, these survivors found themselves cast into the state of nature.

Their story is about defiance, not obedience. They were mutineers, bold enough to resist tyranny and demand the right of self-determination. Cut loose from their contract with the Virginia Company, they tried to build a new society based on mutual consent.

If you wanted to illustrate the “frontier thesis” of American exceptionalism, you could hardly invent a better story. These castaways—and their fellow discontents in Jamestown—were the first true Americans. The trauma of being lost, castaway, marooned, whether by shipwreck or abandonment, transformed them into a new homo politicus: the democrat.

Their story symbolizes our American civic values far better than the Pilgrims. In fact, when you get down to it, it’s pretty hard to trace a direct line connecting the Pilgrims to the Declaration of Independence. The spirit of ’76 repudiates most of what the Pilgrims stood for.

If we want to find the true progenitors of American democracy, we shouldn’t look to the dry-footed landing at Plymouth Rock. We would do far better to remember the story of this wreck on a reef in the mid-Atlantic, the survivors cast away on a sandy shore, and what they did in the wilderness.